The wife of a rubber plantation administrator shoots a man to death and claims it was self-defense, but a letter in her own hand may prove her undoing.


In Singapore, Leslie Crosbie (Bette Davis) shoots and kills a man, claiming that he tried to take advantage of her. She is arrested and her husband, Robert (Herbert Marshall), hires attorney Howard Joyce (James Stephenson) to defend her. During the trial Howard uncovers an incriminating letter that casts doubt on Leslie's story. The two become embroiled in a blackmail scheme involving a Malayan clerk (Victor Sen Yung) and the dead man's widow (Gale Sondergaard).

Josh Larsen: Bette Davis’ eyes don’t really need any help calling attention to themselves, so director William Wyler and cinematographer Tony Gaudio are somewhat piling it on when, on multiple occasions, they use the conceit of a full moon to spotlight her eyes in The Letter. Yet that’s also in keeping with the heightened atmosphere of this humid crime drama, based on a W. Somerset Maugham play. . .

Watching Leslie order the plantation workers about in that opening scene is reminiscent of an earlier Wyler film starring Davis: Jezebel. There, she played a belle in 1852 New Orleans who at one point orders the enslaved people on her family plantation to sing as a way to needle an abolitionist rival. Just as Wyler’s camera made space for the Black characters in Jezebel, he also gives plenty of room in The Letter to Ong Chi Seng (Sen Yung), the Malay assistant to Stephenson’s lawyer. It’s Ong who serves as the go-between when the dead man’s widow, who is part Malay herself, reveals an incriminating letter from Leslie to her late husband and demands a ransom for it. With a foot in each cultural world, Ong suddenly holds unexpected power, and he carries it with an insinuating obsequiousness: bowing as before, but also making eye contact more directly than usual; servile, but in a mocking way. The colonizers still need him, but this time it’s on his terms.


Matt Bailey: If there is any doubt that Bette Davis is the star of this film, high above all others, it is vanquished by William Wyler’s careful framing of her in every shot. When Davis is alone in a shot, the settings seem almost draped around her as if it were velvet arranged to set off a jewel. When she is in shots with other actors, they are often turned with their backs to the camera and pushed to the side of the frame so to better enclose the star at the center. Yet, Davis underperforms her role. As a woman accused (in fact, guilty) of murder, one would likely expect her to be leaving no piece of scenery unchewed, to be stalking from one end of the set to the other, clenching her fists and gasping and fuming as if she were about to breathe fire. This is, after all, the Bette Davis we have come to expect from films like Of Human Bondage and Dangerous. In collaboration with William Wyler, however, Davis always seems to be tempered, to be at her most subtle and affecting. It was under his direction, after all, that she won her second Oscar for Jezebel and that she was nominated as Best Actress every time they worked together. Perhaps, as a rumored lover, Wyler knew how to tame Davis’ more vain impulses, or perhaps, as is evident from his other work, he simply knew how to get subtle work from even the hammiest of performers. When Davis’ character is murdered in the street at the end of the film, it comes not as a melodramatic shock but as an almost preordained resolution. What gives us the unexpected chill, though, is that Davis walks quietly into it and does not perform a tour-de-force death scene. She surrenders her ego to the good of the film and allows her character to slump, anonymously, in the gutter as the camera pulls back and away, providing the perfect tragic ending and concluding an intelligent and subdued performance by an often brash, brassy—but never less than outstanding—actress.

Jeremiah Kipp: With a great sequence to open and close the film, a wonderful turn by Davis combining her effervescent skills at being ladylike and selfish, and an appropriate female enemy in sinister, impassive Gale Sondergaard (as the spider woman wife of the man Davis killed), you’d think The Letter would play far better than it does. Alas, once Davis is arrested for murder, she’s mostly delegated to scenes where her lawyer (James Stephenson) visits her in the jailhouse as she delightfully attempts lying her way out of increasingly hard evidence against her. Davis has several good scenes in the third act that have a melodramatic thrill even as they dip perilously into camp. Her loyal husband (Herbert Marshall) can’t believe she’d kill for any reason other than self-protection, but as the truth comes out Davis transforms from charming civility to sneering disgust. “With all my heart,” she curdles, “I still love the man I killed.” Marshall, relieved, seizes the opportunity to likewise change his dull milquetoast husband into the more enjoyable role of a smiling, hateful passive-aggressive bastard. (Pity this happens near the end of the film, like so much else that’s good about The Letter.)

Unfortunately, most of the screen time is afforded to Stephenson. Though he earned an Oscar nomination for the part and is appropriately distinguished, he’s playing a moral minded prig twisted around the finger of Davis (and what man besides Claude Raines could ever challenge or resist her?). We watch these films to see Davis ensnare and beguile those around her, not to watch the beguiled as they go about trying to save her. Scene after talky scene is wasted on the lawyer uncovering new information, covering it up, wafting between righteousness and sin, all of which eat up precious moments as Davis rots in jail. Like Frankenstein’s monster in the Universal horror classics, The Letter keeps its prize creature too long in the shadows. But a Davis movie cannot withstand scrutiny without her, and even a bad Davis movie where she’s hamming and mugging and even humiliating herself is more fun than practically no Bette at all. 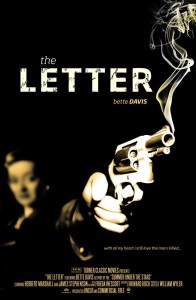