The sequel to A Memory Called Empire by Arkady Martine, winner of the 2020 Hugo Award for Best Novel.


"An alien threat lurks on the edges of Teixcalaanli space. No one can communicate with it, no one can destroy it, and Fleet Captain Nine Hibiscus is supposed to win a war against it.

In a desperate attempt to find a diplomatic solution, the fleet captain has sent for an envoy to contact the mysterious invaders. Now Mahit Dzmare and Three Seagrass – both still reeling from the recent upheaval in the Empire – face an impossible task: they must attempt to negotiate with a hostile entity, without inadvertently triggering the destruction of themselves and the Empire."

Personally, I liked it a lot, but it didn't blow me away as much as A Memory Called Empire. Though it develops Mahit Dzmare and Three Seagrass's characters a lot, which is welcome, you don't have the thrill of discovering the Teixcalaanli culture the way you did in the first book. I feel it could have focused a bit more on Mahit's station, the way the first did on the Teixcalaanli capital.
posted by signal (10 comments total) 2 users marked this as a favorite
Oh I just finished reading this. I agree with Signal's overall impression. I also found the deciphering the language section a bit too rushed.
posted by dhruva at 5:57 PM on April 5, 2021 [1 favorite]

I preordered this based on my experience of the first book, and enjoyed it. I agree with your overall thoughts, signal, and am a bit let down that it appears to conclude the cycle — the Further Adventures of Mahit Dzmare, Freelance Diplomat could have been interesting.

This outing had many of the same flaws as the first, in my view. There seemed to be relatively low stakes for our protagonists (even though the threat was described as existential, I never felt like Mahit of Three Seagrass were actually in peril). It felt like lots of deus ex machina and/or coincidences moved the plot along more so than anyone’s choices. Which is fine, by the way — in some ways this is “gentle sci-fi” (in the way that people have talked about gentle cinema recently on the front page). Which, hey, I’m fine with. I like these characters, even if I can’t completely suspend disbelief for the whole story.

Agree that desciphering the language was too quick/easy, dhruva. That’s one of the “should be high-stakes, felt low stakes” moments. Contrast Blindsight, for some convincingly alien aliens (Peter Watts — if you liked how warm and fuzzy this was as a story, and would not have wanted it darker, definitely do NOT go read that!). Then again, I feel like I understand where Martine was going by introducing a realtime-shared-consciousness alien in contrast to Mahit’s shared-memory culture, but I feel like there was more room to do stuff with that concept!

Anyhow, definitely looking forward to more of her work, even if with different characters/in other worlds.
posted by Alterscape at 6:03 PM on April 5, 2021

I quite enjoyed it, after managing to force myself past the prologue which just confused me at first.

Finding out that it's not the middle book of a trilogy does reduce the post-enjoyment of it, but there was enough of an exploration of consciousness buried in the plot that kept me going past some of the slower sections.
posted by Marticus at 6:18 PM on April 5, 2021

I thought the door was open for a third book; did I miss something? Mahit hanging out in some other far flung colony, and the rebels with the sabotaged imago machine from the first book seemed like the obvious hooks.

Agree with all the impressions so far. Beyond missing the city worldbuilding, I also kind of preferred Mahit as the single POV, especially with the way they were mixed inside the chapters.
posted by Phase Shifting Pulse Gate at 8:12 PM on April 5, 2021

I liked this too, but definitely not as much as the first book. This had a real “episode 16 in a 22-episode season” quality to it, you know? Not exactly a throwaway, but not really essential to the overall arc.

I think my main issue with the Mahit Dzmare/Three Seagrass storyline is that neither of them really played a huge role in resolving the plot. Somebody correct me if I’m wrong, but I feel like the story would’ve been the same if they weren’t there. They helped decipher the language, but was that ultimately a huge factor in how things shake out? Swarm deciding to join the aliens and Eight Antidote sending his message played a way bigger part.

Also, the decision to keep Mahit Dzmare and Three Seagrass apart at the end felt really “writerly,” and to me it wasn’t justified or explained that well in the text. That is, it felt like it was in the book because it’s the sort of thing that happens in books, not because it was the natural endpoint of their arc.

I thought the Eight Antidote storyline was much more successful and affecting.

My comments here are negative but I really did enjoy reading it and spending time in this universe again! I know the author says it’s meant to just be a dualogy but I feel like there’s a lot to revisit and expand on.
posted by Ian A.T. at 1:15 AM on April 6, 2021

Did anyone listen to the audiobook? It had this really weird aspect I’ve never heard before: the narrator took about the same time between sections as she did between paragraphs, which made for a uniquely confusing listening experience. I was constantly like “wait, what are we talking about right now?” because I’d missed that we had jumped across the galaxy in the space of a breath.
posted by Ian A.T. at 1:17 AM on April 6, 2021 [1 favorite]

Seems like a failure of editing and/or directing, not narrating. It was annoying. Having the text fixes the problem and adds a glossary.
posted by kingless at 3:43 AM on April 6, 2021

I think I liked it a bit more than the rest of you did. I don't disagree with most of the criticisms that have been presented, exactly, and agree that it was not quite the mind-blower that the first book was. But I thought changing the focus and adding additional points of view worked well, and I *really* liked the examination of identity (personal, cultural, and in the face of changing technology.)
posted by kyrademon at 1:21 PM on April 6, 2021 [1 favorite]

Also, the decision to keep Mahit Dzmare and Three Seagrass apart at the end felt really “writerly,” and to me it wasn’t justified or explained that well in the text.

Huh, I especially liked that bit because those two would be fucking terrible for each other in their current situation and it'd be a complete disaster in a matter of months. I really appreciate not giving them an unearned happy ending - none of their actual issues were resolved.
posted by restless_nomad at 11:52 AM on April 7, 2021 [1 favorite]

I actually liked this book more than the first one! I really liked A Memory Called Empire, but I thought this one took things to a higher level. Maybe it's because Mahit wasn't my favorite POV, so getting more glimpses inside other characters' heads was beneficial. How great was Swarm/Twenty Cicada? Like with the rebels from book one, it was cool getting the little tidbits about the homeostatic cult that informed his worldview. And there was the subtly seditious graphic novel that Mahit picked up on Lsel Station, and getting more of the inter-governmental squabbling there. Eight Antidote was also a great addition to the main cast as he learned to navigate politics in the center of Teixcalaan.

I think my favorite part of book one was when Mahit gets the working imago back and has to integrate the new double-Yskandr, so I loved seeing the variations on the theme here--imagos, whatever the hell goes on with the Sunlit, this new shard trick that was a whole-ass secret from the Emperor, and now these aliens that formed a collective consciousness through fungus. And the recall of grafting something new (Swarm) after a poem (?) from way back made a reference about it.

Agreed that Mahit needs to Figure Out Some Shit before she's ready for an actual relationship!
posted by j.r at 6:42 PM on April 24, 2021 [3 favorites] 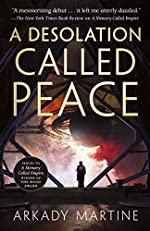