While trying to secure a $1 million donation for his museum, a befuddled paleontologist is pursued by a flighty and often irritating heiress and her pet leopard, Baby.


Harried paleontologist David Huxley (Cary Grant) has to make a good impression on society matron Mrs. Random (May Robson), who is considering donating one million dollars to his museum. On the day before his wedding, Huxley meets Mrs. Random's high-spirited young niece, Susan Vance (Katharine Hepburn), a madcap adventuress who immediately falls for the straitlaced scientist. The ever-growing chaos -- including a missing dinosaur bone and a pet leopard -- threatens to swallow him whole.

Mike Massie: The entire cast is brilliantly eccentric, continually befuddled by Susan’s nonsense. Charlie Ruggles as the stuttering, dumbfounded Major Horace Applegate of the Explorer’s Club; Barry Fitzgerald as the drunken gardener Mr. Gogarty; and Walter Catlett as the inept Constable Slocum are particular highlights, stealing scenes and generating a substantial amount of hilarity. And, of course, Grant and Hepburn compose a dazzlingly energetic couple, playing off each other’s polar-opposite personalities with impressive cinematic flair. Featuring mile-a-minute conversations (usually one-sided), plenty of caterwauling (primarily by Hepburn), comical hysteria, verbal combat, falling-down slapstick, car crashes, the dramatic tearing of clothes, and a refreshingly unique love story, “Bringing Up Baby” is one of the greatest screwball comedies of all time. It also boasts an unforgettable final shot, brilliantly concluding in a bookending fashion, once again on top of the dinosaur skeleton exhibit.

Kathleen Murphy: Bringing Up Baby‘s narrative and thematic directions have much in common with those of Shakespearean comedy. Positing the green world of the forest against the restrictive refuges of civilization, Hawks moves from a rigid and sterile old order into an arboreal milieu of enchantment and mistaken identity, and thence to a new order which synthesizes the best of both worlds. David Huxley is caught up in a midsummer night’s dream (or nightmare) in which identity, time, direction, and traditional modes of communication are lost or changed utterly. Hawks, like some cinematic Prospero, invokes the power of music and nature to effect the existential regeneration of comic hero and heroine.

Tim Dirks: Bringing Up Baby (1938) is one of versatile director Howard Hawks' greatest screwball comedies and often considered the definitive screwball film. It is also one of the funniest, wackiest and most inspired films of all time with its characteristic breathless pace, zany antics and pratfalls, absurd situations and misunderstandings, perfect sense of comic timing, completely screwball cast, series of lunatic and hare-brained misadventures, disasters, light-hearted surprises and romantic comedy. The non-stop, harum-scarum farce skewered many institutions, including psychiatry, the sterile field of science, the police, and high-society upper classes. At the time of its release, it failed miserably at the box-office and was soon forgotten, until it was revived years later.

Trailer
posted by Carillon (13 comments total) 3 users marked this as a favorite
A movie so wonderful that not even a remake (well, sort of) with Madonna could ruin it!
posted by Naberius at 7:26 AM on April 12, 2021

This was a weird one for me. Compared to most of the other romantic comedies of this era I’ve watched, this is the one where the woman came off less “charmingly wacky/free-spirited” and more “dangerously unstable.”
posted by showbiz_liz at 8:13 AM on April 12, 2021

That said - the Grant/Hepburn chemistry was fun to watch in and of itself (and much better featured in The Philadelphia Story). And I do like watching a buttoned-up character gradually get driven more and more nuts until they snap.
posted by EmpressCallipygos at 10:04 AM on April 12, 2021 [1 favorite]

I find this one just goes too far into madcap territory. I like individual moments, but find it exhausting overall. I much prefer The Philadelphia Story for my Grant/Hepburn fix.
posted by wabbittwax at 11:49 AM on April 12, 2021 [2 favorites]

BTW if you’re looking for another good Grant/Hepburn pairing: Holiday might be my favorite from the genre.
posted by Atom Eyes at 4:10 PM on April 12, 2021 [4 favorites]

This is one of my favorite movies! I thought Hepburn was more interesting & funny in this than anything else. Also one of my favorite Cary Grant performances. The first time I watched it I was surprised at how relaxed & easy going the whole movie is & I wished more movies were like this back then. I would recommend it to anyone.
posted by bleep at 7:00 AM on April 13, 2021 [1 favorite]

The flightiness of the Hepburn role meant that the filmmakers didn't feel the need to insist that her character was an awful harridan who destroyed everyone she met; for that reason alone, I've always particularly enjoyed watching Bringing Up Baby. Also Cary Grant is very funny -- but why should I talk about it when Angelica Jade Bastien recently wrote an excellent piece about it.
posted by grandiloquiet at 8:25 AM on April 13, 2021

A movie so wonderful that not even a remake (well, sort of) with Madonna could ruin it!

I dunno, I think the remake with Barbra Streisand is also, in its own way, wonderful.

I revisited this having not seen it for years and there were a lot of parts that had me laughing so hard. I think the film drags a little bit after they arrive at the cabin and the Aunt shows up, parts are still good, but overall it's not as strong as the first parts.
posted by Carillon at 4:38 PM on April 13, 2021

I used to spend just a ton of time watching and rewatching classic American romantic comedies and this is probably my least favorite screwball comedy. (Although I'd say the least funny hilarious screwball comedy is imo Twentieth Century with the divine Carole Lombard.) Yes it's a must see and Hepburn is fabulous, but I think the problem is you've got Cary Grant basically playing a twerp. He gives it his all, but it's just too far from type. It's very mysterious why the Hepburn character Susan has picked this guy to dominate and catch. Maybe it's just an index of how warped she is. Philosopher Stanley Cavell, in his excellent book about screwball comedies Pursuits of Happiness, remarks that it is a film about a man who doesn't know what to do with an erection, and argues that the central thread of the action is the constant burying and unburying of his (dinosaur) bone -- a symbol of the fucking that is strangely not otherwise taking place. "It's David's bone," says Susan to her terrier at some point. "It's precious."

For screwball comedies with Grant in roles that fit better and that are another level of greatness above Bringing up Baby I'd mention His Girl Friday and The Awful Truth. In the first he's an omnicompetent ammoralist who knows what his woman wants more than she does. And does everything he can to surreptitiously save her from her own designs. In the latter he's a more vulnerable chap who simply hasn't been able to accept that he loves his wife.
posted by bertran at 9:26 PM on April 15, 2021 [2 favorites]

OMG I loved this movie growing up because it was one of my mother's favorites (along with Arsenic and Old Lace). I also admit I've avoided rewatching it because I was worried it wouldn't hold up. But it seems like it's worth at least taking the chance. Thank you!
posted by miss-lapin at 6:48 AM on April 16, 2021 [1 favorite]

when my father had it on one day I found my lab in front of the TV completely transfixed at the scene in which Baby jumps out of the car
posted by brujita at 1:25 PM on April 16, 2021 [1 favorite]

bertran, thank you for giving me the heartiest laugh I've had in ages. 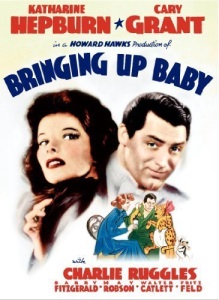