A retired jewel thief sets out to prove his innocence after being suspected of returning to his former occupation.


Notorious cat burglar John Robie has long since retired to tend vineyards on the French Riviera. When a series of robberies is committed in his style, John must clear his name. Armed with a list of people who own the most expensive jewels currently in the area, John begins following the first owner, young Francie. When her jewels are stolen, Francie suspects John, destroying their tentative romance. John goes on the lam to catch the thief and clear his own name.

Allison Skornick-Rose: Grant had a certain suave, debonair appeal, and charming good looks which made him the perfect casting choice for the role of Robie. Kelly was stunningly beautiful and very talented and she was well cast as the smart and bold Frances. Despite their twenty five year age difference, these stars had terrific chemistry which is only one part of what makes the film work so well. Royce is a breath of fresh air as Frances' mother, Jessie, and she offers some of the funnier lines in the movie. Brigitte Auber (The Man in the Iron Mask) has a great supporting role as Danielle, the daughter of Robie's old friend who helps him elude the police. . .

For Hitchcock, this was one of his more lighthearted films and didn't have the same gravitas as some of his other features like The Birds, Psycho, North by Northwest, etc. However, he manages to make a wonderful story starring two icons of the silver screen, Grant and Kelly.

Mike Massie:The highlight of the film is the chemistry and dialogue between Kelly and Grant, who playfully flirt with ceaseless double-entendres and sassy innuendos. It’s romantic and hilarious; she thinks she’s got him figured out (he adopts a fake name to get closer to Jessie and her jewels), and he’s sized her up as a headstrong rich girl shopping for a husband in Europe. It’s irrelevant how many hoops they must go through to end up together – entertainment is mined from the journey and the inevitable conclusion, in which they’re in each other’s arms. Blithe bits along the way include Francie commenting on how much her mother will like Robie’s home and the master thief looking perpetually perplexed at her womanly rush to a domesticated future (not unlike “My Man Godfrey’s” final moments), as if for the first time he’s not in control of his (love) life.

The mystery isn’t challenging and the suspense is unusually subdued for Hitchcock. “To Catch a Thief” leans more toward comedy and general adventure-filled amusement (perhaps less severe even than “The 39 Steps”), capitalizing on a hero who remains consistently upbeat in the face of bad luck, mistaken identities, and possible incarceration – all while courting a seductively brazen blonde. Grant and Kelly’s onscreen romance routinely overshadows the Hitchcockian twists and turns of the plot, but it’s so appealing that it still ranks as one of the filmmaker’s very best.

Clyde Gilmour: Boudoir shenanigans and rooftop skulduggery are the main ingredients in moviemaker Alfred Hitchcock’s latest. It’s hardly one of his best, but it’s not half-bad — and the French Riviera, in VistaVision, is a sight to behold. With Grace Kelly, Cary Grant.

Trailer
posted by Carillon (2 comments total) 3 users marked this as a favorite
I love the very quick shot of French police playing hacky sack in this film.
posted by bq at 12:38 PM on May 26, 2021 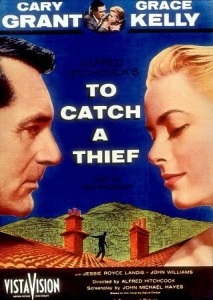