Alison Bechdel (Fun Home, Are You My Mother?, The Essential Dykes to Watch Out For) creates another autobiographical graphic novel, this one covering her entire life and examining it from the perspective of her lifelong quest for physical fitness and its effect both on her body and her mind, and how it has changed (and changed her) as she's grown older.


It's a more straightforward type of narrative than her previous books--the chapter divisions are by decades, which correspond both to her age and the calendar decades (Bechdel was born in 1960)--and follows her through fitness fads and obsessions both major and minor; there are extensive sections on karate, yoga, cycling, and hiking, the latter in particular dovetailing with her discussion of historical figures such as the Wordsworths, Samuel Taylor Coleridge, Margaret Fuller, Adrienne Rich, and Jack Kerouac.

Artistically, it represents a change for Bechdel, as it's the first major work that she's published that was done in full color (the coloring was done by Bechdel's wife, Holly Rae Taylor) with the exception of end-of-chapter illustrations done in a Japanese-influenced style that's softer than Bechdel's usual precise line. The book is also physically larger than Bechdel's other books, which allows for more expansive illustrations.

The Atlantic: The Dharma of Working Out

Bechdel on the blue
posted by Halloween Jack (5 comments total) 1 user marked this as a favorite
I had no idea! It sounds super cool. Will have to get a copy.
posted by Zumbador at 9:09 PM on May 28, 2021

I've always figured there was something wrong with me (or at least, like, un-American?) that I hate exercise and have no interest in doing it and it was refreshing to see it described so deeply and ambivalently as a life pursuit. It's a complicated book that I'll definitely revisit over the years. Worth checking out, for sure.
posted by potrzebie at 1:19 PM on May 30, 2021

I used this to fill in the "Sports" square on my Seattle Public Library summer book bingo card. I really liked the book, as someone who's trying to figure out how to age and also remain athletic.
posted by The corpse in the library at 12:24 PM on June 7, 2021 [2 favorites]

I liked it, and admire how deep she's willing to dig into the well of her own psyche, and also how philosophical it was in approach. It's not quite the revelation that was "Fun Home" or the iconic oeuvre of DtWOF, but I'd also say it's a step up after "Are You My Mother?"
posted by kyrademon at 4:35 AM on July 17, 2021 [1 favorite]

I just finished reading this, and I loved it. A lot of the issues Bechdel deals with about avoiding pain and isolating herself from others really struck home for me. And it's so funny and quirky! But I did wonder how what she was saying was being shaped by the narrative conventions of a book / cartoon. It seemed as if there was a bit of pressure on her to find closure when there was none to be found. "Nirvana is Samsarsa" is a satisfying ending, but was it there because the book had to end on some kind of resolution, just stopping wouldn't work, even though that might be the truest way to end this story of a life still being lived?
posted by Zumbador at 5:08 AM on August 27, 2021 [1 favorite] 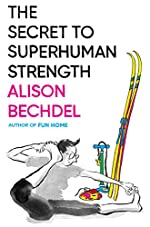