THE SPIRIT OF 99 VIEWING CLUB - British super-spy James Bond faces another adventure as he protects the heir to a oil empire while tracking down a terrorist who is immune to physical pain.


DID EBERT LIKE IT? Completely "The World Is Not Enough" is a splendid comic thriller, exciting and graceful, endlessly inventive."

THE GUARDIAN: A little cooler, but prescient "My advice to the producers of the Bond movies is that they should now acquire the rights to Fleming's Casino Royale, disastrously filmed by other hands in 1967, and get the twenty-first century off to a good start by remaking it."

The series of detailed Bond-as-film-as-adaptation series has a very complete breakdown of the film as it fits into the canon..

Trivia: The title comes from Bond's family motto revealed in "On Her Majesty's Secret Service" and the film contains an homage to that movie's extended ski chase.

The movie is directed by the same documentary filmmaker behind the 7 Up series.

The song, performed by alt-rock outfit Garbage, is one of the better Bond themes - going back to a lush 60s brass sound and sinister vibe. The video for the song is a great retro mini-Bond movie in its own right.

THE BEST: The song, and the opening and closing acts which have surprising grace, levity, and action. The first 20 minutes are practically a comic romp.

THE WORST: Not Denise "Dr. Christmas Jones" Richards. She's no worse then anyone else in the role of Dr. Eyecandy. The problem is the film's middle is wooden and soggy, with a pointless reveal and forgettable, lifeless villains. The Bond movies trade on style and tradition, and the entire middle acts are generic and plodding.
posted by The Whelk (14 comments total) 6 users marked this as a favorite
I remember walking out of this and saying to my moviegoing compadres, "Did Pierce Brosnan just turn into Roger Moore?"

TWINE (and I cannot forgive them for making that unfortunate acronym either) is, at best, Not The Worst Brosnan Bond. The track of Brosnan Bond movies is an almost straight line down -- from the awesome and fun GoldenEye to the still-pretty-good Tomorrow Never Dies to this thing that had some high points but was basically a generic action thriller to Die Another Day, which was just... no.
posted by Etrigan at 5:13 PM on December 25, 2014 [1 favorite]

The only thing I remember about this Bond is the theme song and Desmond Llewellyn's sendoff. I think I'm going to keep it that way.
posted by infinitewindow at 6:43 PM on December 25, 2014 [2 favorites]

I've only seen it once and yup, that was enough, but I do remember thinking that Robert Carlyle was a sympathetic villain and I'm not sure that was intended.
posted by TWinbrook8 at 5:20 AM on December 26, 2014 [1 favorite]

Sophie Marceau is pretty good in it, too, as the franchise's first -- and so far, only -- female mastermind villain. I honestly prefer it to Tomorrow Never Dies, which has a draggy second half, a distinct lack of memorable set pieces, quite possibly the least interesting Bond henchman of all time -- Mister Stamper? Really? --, and, worst of all, far too little of Vincent Schiavelli and Ricky Jay.

TWINE, by contrast, has a much superior antagonist dyad, Robbie Coltrane back again, an M involved in the main plot in interesting ways who actually shows some chops in the field, and an admirably cold-blooded sendoff for Marceau's character.

A lot of the sogginess strikes me as an artifact of the way the Bond films were headed overall, with the stop-n-start action there to facilitate product placements and pointless winking to the audience. Those sins essentially took over DIAD, and I can see where TWINE looks in retrospect like the ramping up of those tendencies. But all in all I'd put it second to Goldeneye among Brosnan's franchise appearances.
posted by kewb at 10:41 AM on December 26, 2014 [3 favorites]

Man I found Marceau so wooden and perfunctory that she sucked the air out of any scene she was in, bad justice to the first female supervillian in the series. I've heard rumors that Waltz in the next movie is going to be a red herring for Blofield as head of SPECTRE and I hope they take the henchman/mastermind reversal reveal here ( which is a good twist on paper) and make it so like, Jenny Agutter is actually Blofield or something,
posted by The Whelk at 6:06 PM on December 26, 2014

The Whelk, that would be an awesome twist, except it's already been done in Dark Knight Rises and (kinda) Iron Man 3.
posted by infinitewindow at 7:25 PM on December 26, 2014

I would argue that both of those movies did it badly (especially DKR), and there's room for doing it well, especially in a franchise with the history with regards to sexism that Bond's got.
posted by sparkletone at 7:46 PM on December 26, 2014

Eh. DKR is a mess, and it's only implied in IR3 that guy perice wants to fuck tony stark. Also false flag war mongering.
posted by The Whelk at 7:58 PM on December 26, 2014

More, beat by beat, there's this sinister new criminal organization rising and it's targeting MI6 projects and ends up on assignment to protect some high level target played by again lets say Jenny Agutter or an alike and no one knows what's going on but it's big. Bond saves her and she turns out to be great in the field and a perfect match for him otherwise, they're chasing this shadow ..this ..SPECTER ruining operations worldwide. Meanwhile James and the Agutter-alike are really hitting it off, could she be the woman he was looking for, someone as smart and tough and flintly as he? Slowly they find it's this ex-pat Swiss funding terrorism or something and siphoning off all the profits - ideology is just a red herring, it's always about money - so Bond and the Agutter alike team up to take him down cause Reasons ...until BUM BUM BUM, it turns out he's just the patsy, Agutter is the real head of this network of mercenaries and shadow spies called SPECTER, and she used James to get in good with M and MI6 and..used him. She escapes in a helicopter after he stops her starting some regional war or something and we have a lead in for Craig's last film and the rub is he has to kill Blofield after having falling in love with her.
posted by The Whelk at 9:29 PM on December 26, 2014 [4 favorites]

Goddamnit Whelk. Way to forget the spoiler tags.
posted by coriolisdave at 5:56 PM on December 28, 2014

This one has some surprisingly good stuff in it, and if seriously pared down it would really work.

The opening sequence was great; I liked Bond's injury throughout the movie (I actually wish more could have been done with it.)

Robert Carlyle's character worked, he was novel in a lot of ways while still having the classic Bond-villain "deformity" that drives him. (And I think it pretty clearly was intended for him to be a sympathetic villain). Electra King was a good villain on paper. She didn't quite gel; but I don't think it was all that detrimental to the movie.

The middle needed some heavy editing, and all the goofy stuff should have been taken out. Cleese, obviously, but ugh, the x-ray glasses.

Especially since they undermine the great and dark final act:

Just Bond shooting Electra than doing that same kiss/hair breathing thing he did to Terri Hatcher's character in Tomorrow Never Dies, while M looks on, saddened but clearly uncomfortable is worth the price of admission.

I just queued up the theme song. It's my favorite of the modern Bond themes.
posted by Monochrome at 2:12 PM on January 2, 2015 [1 favorite]

Why, oh why would you put spoilers for SPECTRE in this thread? I've been trying to avoid them and yet...

I guess this is how Luke Skywalker felt when he found out that Darth Vader is his father.
posted by I-baLL at 5:52 PM on October 8, 2015 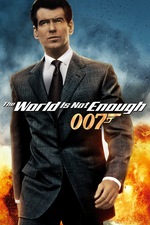