When Amity's parents get Luz, Willow and Gus expelled from Hexside, Luz strikes a dangerous deal with them to get back into school.


Luz returns to school and reunites with Amity, Willow, and a pubertal Gus, but she and the last two are suddenly expelled from Hexside by Principal Bump at the request of Odalia and Alador Blight for distracting their daughter. With Willow and Gus being punished by their parents, Luz decides to strike a dangerous deal with Odalia and Alador for her and her friends to go back to school: demonstrate their abomination-based products called Abominatrons while putting herself in danger. Amity, Willow, and Gus break into Blight Industries to save Luz and Amity convinces her mother to reluctantly allow her true friends back at Hexside. Alador agrees noting that his daughter is getting stronger while Eda and Lilith spend the rest of their day training Luz's glyph lessons. However, Eda's haste to skip the basics and try glyph combos causes one of her attempts to grow icicles that encase King and require Lilith's help. Successfully, Lilith and Eda learn how to combine different glyphs and cast new spells properly, earning both of them extra credit from a tired Luz. The Golden Guard later appears at Blight Industries to purchase the Abominatrons as he states that Emperor Belos dislikes anyone establishing a private army without his knowledge.
posted by Karmakaze (5 comments total)
"Get away from my Luz!!!" Now Luz is blushing back -- Lumity is definitely happening.

Dana Terrance noted in a between-seasons interview that Amity's brown forelock indicating roots growing in, because her mother makes her dye her hair to match the twins. It looks like Amity takes after her Dad in having an unusual amount of inherent magical power as well.

Watching the glyph system develop is going to be interesting. It looks like you string glyphs together like sentences to make your required effect. I'm not entirely convinced Light, Ice, Plant and Fire make up a full set of elements. Yes, you could theoretically map Light to air, Ice to water, Plant to Earth, and Fire to, well, fire, but I still think we're going to find more glyphs eventually. Even with four starter elements, though, once Eda and Lilith are pointed in the same direction, they're going to become terrifying very quickly.
posted by Karmakaze at 8:48 AM on June 21, 2021

It's such a rich world with so much potential. I just hope the big D sees this and opts for more episodes and future seasons. I'll bet they wish they had more Gravity Falls. 6 seasons and a Movie!!! should be the cry.
posted by OHenryPacey at 11:02 AM on June 22, 2021

Unfortunately it's just going to be this season and three movies.

Oh but this episode- Luz blushing with Amity, and Lilith being so happy to be a good student again. And that's possibly planting the seed for more conflict.

It's worth noting that Lilith is still in the villains section in the opening, so I think that she is still going to be at odds with the rest- either Emperor Bellos is going to offer her something, or give her a choice she can't refuse.
posted by happyroach at 2:41 PM on June 22, 2021

Aw, I didn't know they were cutting this off so soon. At least we get movies so they have some future plans. I wonder if this is a story arc limit or a studio limit.

I am loving Luz realizing her return crush. Now they just need to realize the attraction is mutual.
posted by Karmakaze at 8:28 AM on June 23, 2021

Isn't it 3 total seasons and no movies? I haven't been able to find anything about movies being made...
posted by erattacorrige at 7:42 PM on August 6, 2021 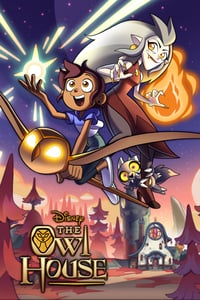