The true story of Selena, a Texas-born Tejano singer who rose from cult status to performing at the Astrodome, as well as having chart topping albums on the Latin music charts.


In this biographical drama, Selena Quintanilla is born into a musical Mexican-American family in Texas. Her father, Abraham, realizes that his young daughter is talented and begins performing with her at small venues. She finds success and falls for her guitarist, Chris Perez, who draws the ire of her father. Seeking mainstream stardom, Selena begins recording an English-language album which, tragically, she would never complete.

Sarah Kerr: Nava is fatally divided between doing justice to the grief of Selena’s fans and introducing her to people who have no more than a vague memory of the headlines announcing her murder. Meanwhile, the world that Selena actually lived in is all but invisible. Nava had a wealth of unexplored material at his disposal, but he seems afraid that no one will be interested in it. It’s the story of shark international record companies sweeping into South Texas, buying up little acts, and making millions off music that began with impoverished farm workers. It’s the story of Spanish-language TV networks exploding across America during the 1980s. It’s the story of Mexican-American singers and country stars circling each other with suspicion but slowly beginning to cooperate. . .

There’s something horrifying about the scenes of the family back in 1981, when Abraham Quintanilla glimpsed his daughter singing and suddenly decided to turn his three children into a band against their will; there’s a sense in which she gave herself up at the age of 9. (Not to mention Selena’s glum, chubby older sister Suzette, whose pathetic, sobbing objections didn’t stop the father from screaming that she had no choice but to learn to play drums.)

Roger Ebert: The biographical scenes are intercut with a lot of music; Selena's original recordings are used, with Lopez lip-synching and doing a convincing job of being Selena onstage; she has the star presence to look convincing in front of 100,000 fans in Monterray, Mexico. Some of the songs build real power, but others are undercut, I think, by unnecessary visual gimmicks like Woodstock-style double and triple split screens, and cutaways to the moon, roses, and other symbols. In one montage late in the movie, the same song is shown being performed at several concerts, to showcase the many different costumes Selena designed for herself; the costumes come across, but the performance is lost in the cutting. When Lopez (and Selena) are left alone to simply sing, the results are electrifying.

"Selena'' is smart in not letting the singer's death dominate the story of her life. We meet her killer, Yolanda Salvidar (Lupe Ontiveros), almost obliquely, when she's introduced as the manager of Selena's new boutique and the former president of her fan club. Soon there's a discrepancy over missing money, and then the shooting, which the movie deals with only through its aftermath.

Felix Gonzalez, Jr.: The script, written by director Gregory Nava, dwells upon many unnecessary details, such as an extended scene in which Chris gets his hair cut, and is filled with often corny dialogue. Having come off of two critically acclaimed films about Mexican families ("El Norte" and "My Family"), Nava seemed like an appropriate choice for this film. It seems, though, that his strengths as a director are not matched by his writing skills, and the film loses focus very quickly.

Jennifer Lopez, on the other hand, elevates the film immensely with her radiant and energetic performance. A relative newcomer at the time, Lopez had not yet created the J. Lo persona that has largely undermined her once promising career, and she demonstrates a natural talent and fresh appeal that she has never quite captured since. Edward James Olmos gives a fine performance as well, effectively balancing Abraham's emotional outbursts with his more tender moments to create a believable personality. The role of Selena's mother is frustratingly underwritten, which is unfortunate for Constance Marie, who shows a true presence in the early parts of the film before she is virtually cast aside.

Trailer
posted by Carillon (1 comment total)
I'm torn on this movie. I really loved parts of this, the acting was generally really good! And it was really cool to hear Selena's music. But the biopic issues came through, like who were those people breaking down the hotel room? What happened to the stage and why did it stop?
posted by Carillon at 9:35 PM on August 5, 2021 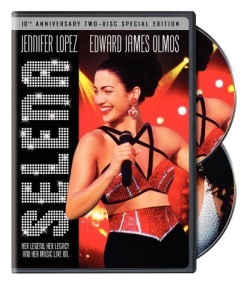