An epic mosaic of interrelated characters in search of love, forgiveness, and meaning in the San Fernando Valley.


The article on Magnolia at Wikipedia has plenty of info with all the usual snippets from reviewers. Ebert gave it four stars in his original review when the movie came out and later included it on his Great Movies list. Not everyone was as enthralled by it, but everyone was hot on Tom Cruise's performance.

From Wiki: "Following the film's release, Anderson said: "I really feel ... That Magnolia is, for better or worse, the best movie I'll ever make." Later, however, he came to consider it overlong[.]"

Poster's thought:
This movie by Paul Thomas Anderson is way too complicated for a quick summary here, so just go to Wikipedia. At three hours long, this movie's pacing keeps it moving, but at the same time, without a clear plot, the little snippets of each character's life just seem to keep coming and coming and the movie started to drag for me. I was glad to see it over. I agree with PTA that losing twenty minutes would have been good.

The actors are all great. I was most impressed by Tom Cruise. This is one of those roles where he sheds his hot shot persona and goes all out and it is really something to see here. It's also interesting to watch him play a self-help guru. I couldn't help but think about his real life role in Scientology and its business of selling books and stuff to its followers.

As to the movie's themes on coincidence, the way PTA illustrates it is very well done. The interlocking fates of the characters are all extremely well shown. It is very well edited.
posted by Fukiyama (16 comments total) 3 users marked this as a favorite
I saw this when it was out in theatres and not since, so when I was 17. I was excited going in and came out certain I… was missing something. I definitely did not get it at the time. Maybe I’m due for a rewatch? For now my primary impression of the movie is that it has a really excellent soundtrack.
posted by obfuscation at 4:50 AM on August 15, 2021

Also: lol the “plot” section on Wikipedia has a caveat that the summary may be too long or excessively detailed. Not sure that’s avoidable.
posted by obfuscation at 4:52 AM on August 15, 2021

This is one of those ensemble movies that is as much about Los Angeles as a place as it is about anything (see also Short Cuts, Grand Canyon, What's Cooking, Crash, etc.). Watched it again a couple of years ago and it didn't ring as true as it did 20 years ago, mainly because it feels so white while it's about a place that is so diverse. The most stunning moment is when time is suspended and the cast begins singing along to Mann's "Wise Up." It shouldn't work, but it does, and it makes the frogfall seem less weird by comparison.

My wife designs theatre and worship experiences, and looking for ways to break out of what's normal and expected and into a whole different realm of experience is what she calls a "Magnolia Moment"--looking to create a similar feel to when the movie breaks open and the cast is/isn't still playing their roles but are singing along to the soundtrack and you're no longer just watching something you thought you understood but it's something else now.

It's an imperfect movie, but I love that it reaches for something more. And so many actors acting their pants off. You could cut 20 minutes, but I'd still want 20 minutes more of Philip Seymore Hoffman staring into space and William H Macy whining and John C Reilly bumbling. I'm not sure you improve the movie by cutting it, you just get less of it.
posted by rikschell at 5:27 AM on August 15, 2021 [3 favorites]

I also had problems with the length. This was exacerbated by the soundtrack's taunt "it's not going to stop" just as I was starting to feel the drag.
posted by polytope subirb enby-of-piano-dice at 10:51 AM on August 15, 2021 [2 favorites]

Cruise should have won an Oscar for this. The quietly judging you scene and the final scene with his father are incredibly nuanced. The entire character really sort of plays on Cruise being perceived as similar in personality to Mackey.

Moore in the pharmacy is a scene that is pretty relevant to current times. The criminalization/demonization of narcotic pain relievers has gotten ten times worse.

Being raised religious the whole frog thing was deeply hard-hitting at the time but sometime later I saw an interview where Anderson said he didn't even know there was a plague of frogs in the Bible. Aside from it being super weird to me that he didn't know that, or said he didn't, that was when I decided to never read or watch directors talk about their work. I prefer to react to what I connect to rather than what they think they're doing.
posted by M Edward at 11:36 AM on August 15, 2021 [1 favorite]

I love this movie, but yeah, it could be a bit shorter. When I last re-watched it, I felt there were a few moments that were a bit on-the-nose, like during the unusual storm near the end (don't want to spoil if you don't remember), there's a sudden zoom in on a bit of text in a painting: "but it did happen." The other moment that jumps to mind is Hoffman on the phone with one of the sales people from Tom Cruise's company: "This is that part in the movie!" On the other hand, Hoffman is so fucking great in that scene.

The other thing I noticed when I first saw it many many years after its debut was the problematic depiction of women. It's not quite as bad as some things in Boogie Nights, but Julianne Moore & Melora Walters were both largely defined by their sexual relationships with older men -- the gold-digger vs. the victimized child. I think there was a ball-busting mom also? Anyway, fairly stereotypical.

But yeah, pretty much everyone is great in this film. Tom Cruise just totally kills it in every moment (the extended scenes on the DVD/Blu Ray are great too). Hoffman's humanity and kindness as the nurse. The relationship between John C. Reilly's cop and the young black boy who tries to clue him in. Julianne Moore's breakdown in the pharmacy. Henry Gibson's smug mockery of William H. Macy --and I just found out from Wikipedia that Gibson's character was named Thurston Howell! :D Philip Baker Hall trying to maintain his dignity in front of the cameras. So many great, powerful moments.
posted by Saxon Kane at 11:48 AM on August 15, 2021

I'll add my praise to Cruise's performance. He displays a self-awareness of how he (Cruise, the actor) comes across sometimes, and plays that public persona to the hilt. A great example of taking chances, putting yourself out on display for an audience, then daring anyone to laugh.

PTA’s most naked attempt at aping his hero, Robert Altman. Some amazing performances and set pieces, but on the whole, a bloated pretentious mess that doesn’t really hold together. Easily my least favorite of his films.
posted by Atom Eyes at 6:10 PM on August 15, 2021 [2 favorites]

There are some movies that I enjoyed so much in the theater, as an experience, that I have never wanted to watch them again. Because maybe I won't like it as much the second time. This one, Blair Witch and Punch Drunk Love (another PTA joint!) are in those categories. They just carried me along and it was a great ride.

And this movie gets a pass forever for introducing me to Aimee Mann. I've been to see her three times and I'd go a hundred more. She never tours this far South though.

So anyway, if you haven't seen this, maybe go into a theater with no set expectations and see if it catches you up.
posted by emjaybee at 8:00 PM on August 15, 2021

I do really love this film, although I haven't seen it in years.

However, one thing that has always bothered me a bit: the films somewhat hangs on there being this intricate web of characters and how they all relate to each other... but that doesn't really hold up. There are two basically disconnected groups in the film.

In the one group: the police officer, the game show host, his daughter, the former champion, the current one, etc.

In the other group: Frank, his dying father and his wife, the nurse.

But there is really no connection between these two groups other than the fact that the dying father was the producer of the show. It just seems a bit odd to me.
posted by vernondalhart at 9:18 AM on August 16, 2021 [1 favorite]

vernondalhart:
Oddly, there seems to be some kind of connection between the William H. Macy character and Tom Cruise. I don't know if it's actually the case, but I noted a few times where WHM's guy psychs himself up by repeating platitudes that were very much what Tom Cruise's guy was preaching (minus all the references to men and women and their genitalia).

Anyone else notice this or am I imaging it?

And the little kid who tried to tell John C. Reilly who did it and then appeared later to save Julianne Moore.

This is a movie (along with The Fifth Element) that I went back to the theater and saw multiple times. I really love all of it. I'm surprised no one has mentioned all the 82s.
posted by Catblack at 10:39 PM on August 16, 2021

Great soundtrack. The film itself? Adolescent, infantile garbage. I tried hard to appreciate it, but it played like a 16 year-old drama kid wrote it.
posted by Jessica Savitch's Coke Spoon at 8:56 AM on August 17, 2021 [2 favorites] 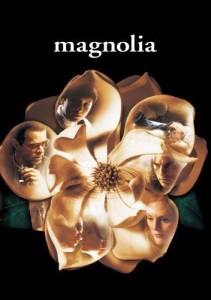