Larry spans the globe, uniting favorite and new characters while embarking on an epic quest to save the magic before it is gone forever.

"The premise shares something with durable silent-era slapstick yarns, even if the material underserves Mr. Stiller, Ricky Gervais, Steve Coogan and the other comedians. (As Roosevelt, Robin Williams serves more as a benevolent fatherly presence.) But the writers turn out amusing riffs on how historical figures might react to the present, nice bits of business (like a tumble into an Escher painting) and a passable Passover joke.

"It's a chronically underachieving movie, but relatively amusing in its quaint wish fulfillment."

Official trailer
posted by joseph conrad is fully awesome (2 comments total)
The Hugh Jackman scene (complete with a seconds of the Wolverine theme) was so much funnier to me than it really had any right to be.
posted by Nonsteroidal Anti-Inflammatory Drug at 2:07 PM on January 12, 2015 [1 favorite]

I thought that scene could have done with being shorter and tighter, myself; felt a bit self-indulgent. As did the whole extended bit with Lancelot praising Larry's "gift" for comedy: "he does what seems like nothing, a sort of deadpan." YES YES VERY META WE GET IT.

Also, too much monkey pissing.

But overall, I enjoyed this a whole lot more than I thought I would; it's silly, but it fully embraces its silliness.

Creative Screenwriting interviewed screenwriters David Guion and Michael Handelman: Night at the Museum: Writing for Ben Stiller and Robin Williams.
posted by We had a deal, Kyle at 9:52 PM on September 26, 2015 [1 favorite] 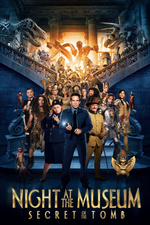