A team of allied saboteurs are assigned an impossible mission: infiltrate an impregnable Nazi-held island and destroy the two enormous long-range field guns that prevent the rescue of 2,000 trapped British soldiers.

John Gillett: one feels that The Guns of Navaroneis mainly the conception of its producer and adaptor, Carl Forman. Here is a plot which could have made an effective wartime adventure story, a little old-fashioned perhaps, yet sufficient for ninety minutes entertainment with a sure, swift forward drive towards its spectacular climax. Unhappily, elephantiasis has taken its toll. Fill out with dialgue exchanges about bravery, cowardice, and personal responsibility in action, the film laboriously tacks its little band of Bristish saboteurs as they wanted around pretty Greek locations, dispatching both Germans and local traitors as they go. The emphasis laid of the characters' interior stresses suggests that this was the aspect of the story which mainly concerned its producer. But as these bouts of introspection are neither clarified or explored, their only effect is to inflate the narrative unreasonably. The actual action sequences might have served well enough had they been more expertly done. J. Lee Thompson's direction fails to quicken the pulse, however, except in a well constructed studio shipwreck, and he has encouraged Gregory Peck and David Niven to repeat their well-worn portrayals of tight-lipped inflexibility and jaunty dare-devilry. Above all, the film lacks a firm controlling hand which would have ironed out passages of incoherent editing and made the climax really tell. Whereas one is carried along by the mechanics of the Exodus prison break, by the time of the attack on the Navarone guns is reached the film's volition is exhausted and one watches the operation with a kind of tired detachment.

Mike Massie: Despite its length, “The Guns of Navarone” isn’t without genuine suspense. The heroes are outnumbered and the odds are against them, becoming underdogs entirely worthy of support; and just when their mission appears most infeasible, the stakes get higher and the hurdles more frequent. Plus, the picture offers up engaging moral conundrums and perspectives on war, from sacrificing human life in pursuit of victory; to the futility of winning, when it’s just one of countless armed conflicts that mankind will wage until the end of time; to the blame/responsibility of carrying out orders; to the act of killing itself. The finale is a touch overdramatic, but the film is nonetheless a first-class war epic.

Arthur Ryel-Lindsey: Navarone is strikingly reminiscent of The Bridge on the River Kwai. But where Kwai’s regular Joe was an enlisted American played by William Holden who clashed with his British counterparts for putting their mission above the health and safety of their individual men—meaning the film retained some sensitivity to the senselessness of war and the impossibility of its strictures of rank—the regular Joe in the fictional mission in Navarone is the world’s best mountain climber, and with a name to prove it: British Capt. Keith Mallory, evoking George Mallory, who led three British expeditions up Everest. The result is a straightforward blood-and-guts caper, which echoes the impossible bank heist movie more than it does a war story. No real consideration for the morality of the war or the mission for these guys. Even more, no stealth: German sentries are killed off left and right, with no consideration for what will happen when the report from the far side of the island doesn’t come in. The push to the fabled guns commanding the Aegean Sea becomes a ruthless onslaught. Gregory Peck, as Mallory, gives a wonderfully unperturbed performance, outdone only by the versatile coldness and comedy of Anthony Quinn. David Niven is the subservient but stylish chemist Miller, rounding out a film that ranks among the best war movies—for mayhem, fighting and a simple, sanctimonious story about heroism when it’s war at all costs.

Trailer
posted by Carillon (5 comments total)
Two scenes I will stop and watch... The first is when Anthony Quinn provides a diversion during the interrogation. I love Quinn in just about everything he does. The second is when the group takes cover at an outdoor wedding reception and the Greek member sings a verse of the folk song, thus earning the acceptance of the Greek population.
posted by Fukiyama at 8:46 PM on September 23, 2021

The ambush of the German patrol boat and the subsequent storm are some of my favorites. I do think having Maria kill Anna, and the way that scene plays out, really undercuts the tension and the impact of that scene. It's a thing movies do where they want it both ways where the hero makes the tough decision but they don't wasn't their hands dirty. It's bullshit and I hate it. Maria killing Anna makes sense, but the way it's done really sucks.
posted by Carillon at 9:46 PM on September 23, 2021

"Saturday night beneath the plastic palm trees
Dancing to the rhythm of The Guns of Navarone
Found my Mecca near Tottenham Hale Station
I discovered heaven in the Seven Sisters Road"
posted by thatwhichfalls at 7:50 AM on September 24, 2021

The Guns of Navarone is a favorite. Thinking back on it, it's greatest strengths are the acting; by the FIRST CLASS!!! cast headlined by Peck, Niven, and Quinn; and that it's surprisingly moody for an otherwise by-the-numbers, mid-cycle, WWII pic. I know it's a cop-out that Maria kills Anna, especially after Miller's big, goading speech. But it works for me because obviously Mallory is relunctant and I feel like Maria decides to spare him the torment.
posted by Stuka at 4:47 PM on September 26, 2021 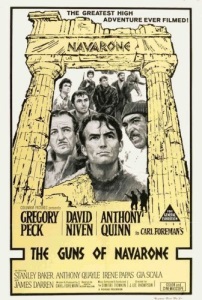