In this New Zealand gothic, twins Jack and Dora are adopted by different families as toddlers. As young adults they find each other, but years of abuse have changed Jack.


Jack's young life is spent with a sadistic family. Dora develops psychic abilities and uses them to find her brother. But the reunion sours quickly. Both are haunted, Jack by his abuse and Dora by the voices of the dead. However, Jack is not the only one seeking vengeance.

This film was directed by Garth Maxwell (Xena) in 1993, and starred Alexis Arquette and Sarah Kennedy as Jack and his sister Dora.
posted by miss-lapin (1 comment total)
This is a film that really defies description. It has so many different tropes, it shouldn't work, and yet it's riveting to watch. The surreal nature of the work captures the cruelty of the original Brothers Grimm stories.

Sadly, this film is difficult to find currently. Hopefully that will change in the future as it's definitely a unique viewing experience.
posted by miss-lapin at 12:31 AM on October 12, 2021 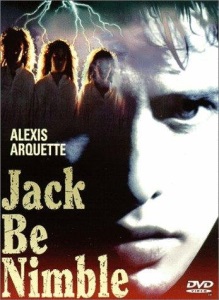