On the cusp of his 30th birthday, Jonathon Larson, a promising young theater composer, navigates love, friendship, and the pressures of life as an artist in New York City. Adapted from the musical tick, tick... BOOM!, directed by Lin-Manuel Miranda, screenplay by Steven Levenson, songs by Larson.


tick, tick... BOOM! began as a rock monologue first titled 30/90, and later Boho Days. The film tells the story of Larson's attempts to deal with turning 30 while trying to get his first musical produced and working at a diner. Larson later went on to write the very successful Broadway musical Rent, but died of an undiagnosed aortic aneurysm the night before Rent began previews Off-Broadway.

The film contains many, many cameos by actors and composers, including an audio one by Stephen Sondheim. Here's a guide to the rest (with timestamps).

The Atlantic: Tick, Tick … Boom is an exciting, sometimes angry, but winningly self-aware examination, a cri de coeur that feels like the announcement of a thrilling new talent, even one who fears that he’s already over the hill. Larson, however, actually was running out of time, as the film adaptation notes in a touching prologue.

RogerEbert.com: If you know how many minutes there are in a year, if you recognize at least eight of the Broadway legends who are having Sunday brunch in a diner scene (and if you have seen some of them on stage), and if you are delighted that said diner scene turns into a musical number about ... Sunday brunch, then you will adore “tick, tick...Boom!” a love letter to Broadway musicals and the artists who create them.

Now streaming on Netflix and playing in movie theaters.
posted by still_wears_a_hat (9 comments total) 4 users marked this as a favorite
This felt too wholesome by half. It's trying to pull off a downtown scene without sex, drugs, clubs, or whatever it is that makes Larson NEED to stay in the city. Even In the Heights was edgier than this. From what I've read of Larson, it seems like that stuff should be here, but either they were trying to make it very PG-Glee or Larson's estate wanted to make him a saint. I enjoyed it, and Larson was not the gutsiest guy to follow, sure. He was a straight white musical theater kid. But Rent (while not being the grittiest show in the world) did start to pry Broadway away from the Big Spectacle where it was more important to land a helicopter on stage than to have catchy songs or characters you cared about. That seemed like something they wanted to convey, but I didn't really feel it.
posted by rikschell at 4:54 PM on November 29, 2021 [2 favorites]

I really loved this; I'm sure it didn't hurt that I was a big RENT fan back in the day. I hadn't seen this on stage and was sort of "meh" on the score, but to me it all just worked. Loved the casting (except for Vanessa Hudgens whose whole career does not make sense to me, but that might be my baggage), loved the design, loved the CAMEOS, loved the music bits from Suburbia that I'm furious aren't on the soundtrack. I related very strongly to the scene where the workshop is over and he's on the phone with his agent (Judith Light breaking my heart as usual!!!) who's telling him: it went really well, the show is going nowhere and you've got to write the next one. Very interesting piece for Lin-Manual Miranda to take on - another story of a hard-working phenom who died too young.
posted by ThePinkSuperhero at 9:07 AM on November 30, 2021 [3 favorites]

I'm actually very impressed with the direction here. I don't think I would have liked the original stagings that much, although that music is damn catchy. Loved the cameos and references. I can see how this is the person who wrote Rent, although I've gone from a tweenage Rent fan to a 30-something who is like, "you sorta have to pay rent though? and did I hear that drag queen say she killed a dog!?" Thank goodness that lynchpin song was better than the one Roger spent the whole of Rent writing. It's generic but it sounded fine, although the duet setup didn't do favors to Hudgens. Who, let's be real, sings waaay better than I can but I still preferred Alexandra Shipp's lovely voice.

I'm working on writing my great novel but the ship has sailed on my being a wunderkind, if it gets out there and is a success in any way.* So I laughed at the opening anxiety at turning 30, although it is bittersweet knowing Larson's future in real life. This movie also had an uphill battle with me for being a) a musical about writing musicals (and with obligatory glorifying of the New York BohemianTM lifestyle), which is always masturbatory; and b) about a straight white guy being a jerk to his girlfriend and his gay best friend who works in advertising because he's a ~tortured genius~.

In the end I still had fun watching this.

*I soooo appreciate some Twitter thread I saw somewhere about all the successful authors who didn't publish their books until their 30s, 40s, or later. Nicely puts to rest the idea of it ever being "too late" to do a creative endeavor.
posted by j.r at 11:36 AM on November 30, 2021 [2 favorites]

I largely see the reaction to this falling into two camps:

EVERYONE ELSE'S REACTION: "Interesting but...." (shrug)

I kind of have a foot in both camps - I was a theater kid, but I ended up moving towards straight drama and a more practically-minded mindset and less of an artistic one, so I have the perspective of "yeah, this is speaking to a very specific mindset" but the familiarity of "but dang if it doesn't nail that mindset really, really well". It's a love letter to theater and Broadway and the theater culture; the video that goes with the "Play Game" rap absolutely skewers the corporatization of Broadway with the posters that appear behind Tariq from the Roots (I've been trying to find a picture but can't), and I loved that, but that's something that only people who've worked in theater would really get on a visceral level.

I already moving into stage management when Rent came out, and was kind of starting to sour on the Lower East Side by then, so I didn't see it; I joked that "I live in the Lower East Side so seeing Rent would be redundant for me". It was never my bag. But it is inescapable that Jonathan Larson was a talent that would have been one to reckon with had he lived. And it is also inescapable that Andrew Garfield does a phenomenal job with this.

So - I think it's a story for theater insiders, but still there are things to recommend it to others.
posted by EmpressCallipygos at 12:22 PM on November 30, 2021 [4 favorites]

Still tried to find photos of those posters I'm talking about from THE PLAY GAME. This is the closest thing I could find - item #31 on this list of "37 Easter Eggs from Tick Tick Boom" -

During "Play Game," you can spot posters that playful poke fun at Broadway. They include G**sy (Again), A New Play But It Has That Guy From That Television Show So You'll Like It, Old Songs You Already Like, and more.

Another parody poster I swear I saw listed was for a show titled Rich White People Arguing About Their Marriage or something like that.
posted by EmpressCallipygos at 8:29 AM on December 2, 2021

Lin-Manuel Miranda posted pictures of the posters on Twitter.
posted by jimw at 7:27 PM on December 3, 2021

This got me right in the feels. I only got my shit together and made my first full-length show because I saw 30 coming up fast and couldn’t stand the idea that I wouldn’t have done that, by then.

Now I’m a broken man on a Halifax pier, waving goodbye to that whole part of my career.

Andrew Garfield, man! I didn’t know he could sing. Although from the end-credits footage he arguably should have done prosthetic ears.
posted by sixswitch at 9:05 PM on December 6, 2021 [1 favorite]

Andrew Garfield, man! I didn’t know he could sing.

There's been some adorable talk about that in the various interviews I've seen....LMM didn't know if he could sing, but saw him when he played Prior in Angels In America recently and knew that he was a phenomenal enough talent that he could probably figure it out. He also said in another interview that when he approached Andrew Garfield about the role and asked him if he could sing, Andrew asked "before I answer - when are you starting filming?"

I also saw another clip from an Andrew Garfield interview; he was working with a vocal coach one day before they went into filming, early on, and as he finished a particular song suddenly a crumpled-up newspaper came flying at him. He looked over towards the door, from whence it came - and LMM was standing there. "How dare you not tell me you could sing like that!" LMM crowed in mock fury.
posted by EmpressCallipygos at 3:41 AM on December 7, 2021

Andrew Garfield is amazing in this. Watch it for him. He's remarkable. He's just so ... loose and sensitive and open. It's not in a weird "method" way. It just felt like he put his whole heart into this because he loved it and meant it.

I think some of this was kind of ... indulgent? Like, OK, LMM, we get you know a bunch of Broadway people, you don't need to put them in that whole "Sunday" sequence. If you don't recognize those people, why do you care about any of this? If you do, it feels distracting. (I was more on the distracting side, but, well ...)

But it all also just felt so sincere. All these people meant it! I think it works because of that. They make you care! It's a story where there's not that much at stake, honestly, but I fell in love with Garfield's Jonathan and I was going to be on his side no matter what.

I think the "stage show that becomes a biopic" stuff was done really well. The transitions were great.

I do think how much people like this depends on their patience for theater kids (even if those kids are adults). Me, I love theater kids so I had a lot of affection for these people. I don't know how much it works if you don't.

But still, Garfield is amazing. If people don't like the rest of this, I hope they like him in it.
posted by edencosmic at 7:07 PM on December 16, 2021 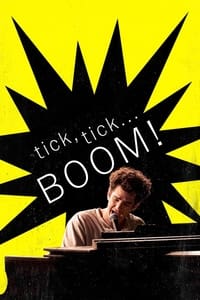