Alice is a withdrawn 12-year-old who lives with her mother and her younger sister, Karen (a very young Brooke Shields), who gets most of the attention from her mother, leaving Alice out of the spotlight. When Karen is found brutally murdered in a church, suspicions start to turn toward Alice. But could a 12-year-old girl really be capable of such savagery?


In the years following its release, Alice, Sweet Alice has garnered a reputation as a cult film and an early take on what would become the slasher genre. Alice, Sweet Alice holds an 77% approval on Rotten Tomatoes, based on thirteen critic reviews, with an average rating of 7.16/10.

Patrick Legare of AllMovie called the film an "eerie, effective chiller," praising the film's cinematography, and awarding it four-and-a-half out of five stars, while TV Guide praised it as "an excellent low-budget horror film from director Sole, whose impressive grasp of filmmaking technique and eye for the grotesque keeps the viewer on edge throughout the movie." Ed Gonzalez of Slant Magazine's 2005 review of the film called it: "Possibly the closest American relation to an Italian giallo, the film is head-trippingly hilarious (Jane Lowry, as Aunt Annie, may be the nuttiest screamer in the history of cinema) and features some of the more disquieting set pieces you'll ever see in a horror film." Time Out, London's review praises the film for constructing "a running commentary on the themes of Alfred Hitchcock: against a carefully evoked background of Catholicism emerge twin themes of repression and guilt."

Currently streaming in the US for free on Tubi.

Discussed at length on Evolution of Horror's Slasher Part 4 podcast, along with the original 1974 version of Black Christmas.
posted by DirtyOldTown (2 comments total)
I had not anticipated the extent to which this would also be a period piece about early 60's Catholics in New Jersey. It's amazing that this director could show a fair degree of skill and insight in his first film, then work steadily for decades after, never doing anything half as good ever again.
posted by DirtyOldTown at 11:07 AM on December 23, 2021

This one works pretty well, combining that East coast Catholic community dynamic and imagery 8with a broken family, a villain wearing an unsettling mask and raincoat recalling Don't Look Now, and an especially creepy focus on a correspondingly creepy young girl's budding sexual maturity. American giallo is a pretty neat descriptor for this movie. There's so much that's right in this movie despite the modest budget and effects, it definitely gets my approval.
posted by 2N2222 at 8:27 PM on December 23, 2021 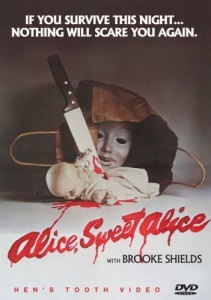