Two men attempt to prove they committed the perfect crime by hosting a dinner party after strangling their former classmate to death.


Just before hosting a dinner party, Philip Morgan (Farley Granger) and Brandon Shaw (John Dall) strangle a mutual friend to death with a piece of rope, purely as a Nietzsche-inspired philosophical exercise. Hiding the body in a chest upon which they then arrange a buffet dinner, the pair welcome their guests, including the victim's oblivious fiancée (Joan Chandler) and the college professor (James Stewart) whose lectures inadvertently inspired the killing.

Vincent Canby: "Rope" is about as dispassionate as a film can be, at least one that pretends to be about human beings. Its unemotional calm is like that of the frontier woman Lincoln used to describe, to make the point that there are times when a lack of bias is counterproductive. Coming out of her log cabin one morning to find her husband in mortal combat with a bear, the woman shouted, "Go it, man. Go it, bear."

It's not that "Rope" doesn't eventually take sides. There's a rather awful speech at the end in which the two young murderers' former prep- school teacher, Rupert Cadell (James Stewart), who brought up his prize pupils on Nietzsche's superman theories, suddenly recants and admits that all his theorizing has been hogwash. Until then, however, "Rope" has taken in the events of the story in the manner of a cat that, ignored by the guests, ambles freely around the apartment - the film's single set - appearing to be bored, completely uninterested in the action, but not missing a trick.

In "Rope," Hitchcock is less concerned with the characters and their moral dilemmas than with how they look, sound and move, and with the overall spectacle of how a perfect crime goes wrong.

Virginia Graham: Rope is the first film to be made employing the new "ten-minute- take " technique, the first film to run exactly to the action's time and the first modern film, so the producers think, without a musical background. It is also the first Hitchcock film in Technicolor and the first film to show us a coloured Mr. James Stewart. With so many firsts to its credit, Rope might be expected to have taken a cinematograph degree ; but in point of fact, though it is above the average for thrillers, the main interest lies in its technical novelty. Mr. Patrick Hamilton's macabre story of how two young men kill another for the fun of the thing, put him in a chest and then invite his relatives to dine off it, lends itself perfectly to the new treatment, for the action takes place in a flat, and there are no time lapses. The murder, the meal and the discovery of the crime fill an hour and a half, and I must say there is something very satisfactory about this continuity, although admittedly it denies the screen its sole advantage over the theatre.


Bosley Crowther: For apart from the tedium of waiting or someone to open that chest and discover the hidden body which the hosts have tucked away for the sake of a thrill, the unpunctuated flow of image becomes quite monotonous. And the effort of application to a story of meager range becomes intense. The physical limitation of the camera to one approach compels it to stay as an eavesdropper on lots of dialogue and lots of business that are dull. And the yarn, by the nature of its writing, is largely actionless.

It is true that the questing Hitchcock camera is not inflexible. No one can say that this picture is a literal photograph of a play, even though the script is an abridgment -- almost straight -- of Patrick Hamilton's "Rope's End." Mr. Hitchcock has followed the goings and the comings of characters with evident ingenuity. His camera stands back and takes them in, singles them out on occasion and even moves in now and then for close looks. But, withal, the smallness of the area and the lack of cinema comment are soon felt.

Also -- and this may be simply a matter of personal taste -- the emphasis on the macabre in this small story is frightfully intense. And it seems to this public observer that time could be better spent than by watching a waspish cocktail party in a room with a closely present corpse, placed there by a couple of young men who have killed for a thrill and nothing more.

Trailer
posted by Carillon (11 comments total) 7 users marked this as a favorite
Interesting film, it was engrossing though macabre. The James Stewart character definitely gets off too easily saying oh you followed my word how dare you, I'm so different etc etc., but certainly a fun trick. The cutting behind the back is definitely noticeable, but still quite a fun little experience.

Farley Granger though I thought was really quite the discovery for me. I don't think I'd seen his work before and came away thinking his performance was quite nice.
posted by Carillon at 12:40 AM on January 8, 2022

I actually was struck with the dynamic between John Dall's character and Jimmy Stewart's. I got the sense that the professor knew something big was up way earlier, and was kind of hanging back and playing dumb because he just knew that Brandon Shaw wanted to impress him, and just wouldn't be able to resist dropping bigger and bigger hints so that Stewart's character would "figure it out" - and then sprang the trap all "dude, you just confessed to murder, you're fucking nuts".
posted by EmpressCallipygos at 5:05 AM on January 8, 2022

This is one of only two or three Hitchcock films I haven't seen. Is it streaming somewhere that won't require yet another subscription?
posted by Thorzdad at 6:37 AM on January 8, 2022

Probably worth mentioning that the film is based on the Leopold and Loeb case.

The murder, the meal and the discovery of the crime fill an hour and a half

Not exactly, to my eye. Watching Rope again recently, I think Hitchcock subtly sped up events so that the story unfolds more quickly on screen than it would in real life. The result is a taut (like a rope!) thriller.
posted by SPrintF at 9:03 AM on January 8, 2022 [3 favorites]

Here's a bunch of places to watch Rope online, including $4 rentals at most major services.

Rope is one of my favorite Hitchcock movies because it's one of the most queer of his movies. The whole film is just laden with homoerotic tension. I don't know how much it was intended to actually play the characters as gay men but every interaction between the three men at the center of the story is just full of sexual politics. The film (and previous play) are based on the Leopold and Loeb murders and Hitchcock's audience would have been familiar with that gay murder trial sensation.

Honestly all of this context is fairly homophobic by contemporary standards. But for me growing up in the 1980s this film was catnip. I've always enjoyed histrionic gay menace stories. In part because they were an avenue to at least have some queerness on the screen, often with sympathetic bits snuck in. Both the actors John Dall and Farley Granger were themselves queer. Granger is also in Hitchcock's other big gay film, Strangers on a Train.

Rope is a favorite topic for queer critics writing about the portrayal of gayness in American culture. I don't have any great essays on hand but there are many readings out there that are not hard to find. Over they years the writing shifted from "did you know this was a gay movie?" to "this is a gay movie and it's homophobic" to "it's kind of homophobic but it's also fascinating".
posted by Nelson at 9:04 AM on January 8, 2022 [10 favorites]

I don't know how much it was intended to actually play the characters as gay men but every interaction between the three men at the center of the story is just full of sexual politics.

It's my understanding that the play it was based on was way more overt with the homoeroticism between all three, to the point that it is more strongly implied there was some kind of relationship going on between the two murderers and that the professor may have also mixed in there. This was in the tail end of the Hays Code days so Hitchcock likely had to tone that down.
posted by EmpressCallipygos at 9:40 AM on January 8, 2022 [4 favorites]

This is one of the greatest movies of all time IMO and I don't even like watching it. But it's one of the few movies that's actually doing something.
posted by bleep at 11:38 AM on January 8, 2022 [1 favorite]

One small thing too is that they end up eating off their laps during the 'party'. I think it's the earliest depiction I've seen of that practice. It's small but something that tickled me.
posted by Carillon at 1:46 PM on January 8, 2022

I always like the New York skyline cyclorama in Rope - somebody modelled all the buildings, including the moving clouds (made from spun glass) and the rising steam - and they got the lighting to adjust as the evening progresses. It was the largest cyclorama ever built and its creation would have taken a huge amount of work - I very much doubt anybody would ever try such a thing now.

In terms of the timing of the action, psychologist Antonio Damasio wrote that Hitchcock played about with the perception of time in the "real time" film. The action is supposed to by 80 minutes long: but apparently the film was shot over 100 minutes with some elements (like the sunset) sped up to give a sense of compressed time. This inspired him to write an entire paper on the way our perception of duration can be manipulated by various elements.

Probably worth mentioning that the film is based on the Leopold and Loeb case
I did not know this! Interesting that Leopold and Loeb appeared to have been equally careless in the actual execution of their perfect Übermensch murder. Maybe the imperfections would make the whole thing more thrilling?
posted by rongorongo at 3:19 AM on January 9, 2022 [3 favorites]

Hitchcock was trying really hard to shoot in uninterrupted single long takes and impressed this upon everyone involved, stressing that he didn't want to stop for anything.

He apparently freaked out some guys in the crew so much that once during one another the camera rolled over one boom guy's foot, and when that happened, three other guys panicked and tackled him, covering his mouth and dragging him into another room in case he yelped and messed up the take.
posted by EmpressCallipygos at 7:41 AM on January 9, 2022 [5 favorites]

Farley Granger's autobiography Include Me Out: My Life from Goldwyn to Broadway is terrific. He was bisexual and its pretty obvious that Hitchcock knew it, as he is extremely gay-coded in this film and somewhat so in Strangers on a Train (his scenes with Robert Walker have the quality of a creepy pick up).

Also, he was longtime friends and occasional fiancé to Shelley Winters and everything he writes about he is hilarious.
posted by maxsparber at 12:17 PM on January 14, 2022 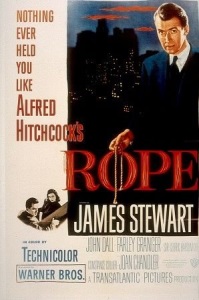