Not wanting to go home and looking for an escape from her recurring nightmares, 18-year-old Sarah submits to a university sleep study, but soon realizes she's become the conduit to a frightening new discovery.


Currently streaming in the US on Hulu.
posted by DirtyOldTown (5 comments total)
I'm not familiar with this one and curious about your opinion. I remember seeing a trailer for it which was intriguing and then forgot about it.
posted by miss-lapin at 4:14 PM on February 12, 2022

I found this very intriguing and eerie, with great and haunting dream visuals, which almost landed gracefully but at the last second tacked on a nonsensical ending copied from a creepypasta. I would say watch it to enjoy the disquieting vibe but don't expect much beyond the vibe to stick with you.
posted by ejs at 6:23 PM on February 12, 2022

This was mentioned by Bigbootay. Tay! Tay! Blam! Aargh... in a thread about coffee last summer, and it sounded really intriguing. And so it was! I really dug this, though the last act veered in a direction I thought kind of undermined the rest of the film. One of the things I liked about it was the atmosphere: if you started in 1983 as envisioned by Panos Cosmatos in Beyond the Black Rainbow and Mandy and fast-forwarded ~40 years, this would be the result.

This is like if Cronenberg had made Dreamscape. The visual aesthetic is great: a creepy, greenish, somehow sort of 80s vibe with analog monitors, sterile/brutalist Toronto uni/hospital locations... and the shadow with eyes! I am 100% a child seeing this too young could have sleep ruined for them forever by this.

That said, to work a movie has to score high on a variety of dials. And this one may divide some people as the dials for story coherence and narrative don't get too far out of the mid range, even as it's revving high on look and feel.

I really liked it, though. And for me, a movie about dreams and nightmares by nature will get more latitude for foggy narrative and weirdly passive characters. That is how dreams work, after all.
posted by DirtyOldTown at 7:26 AM on February 15, 2022 [1 favorite]

The above was my spoiler-free reply because it was asked if this was good.

Now for detail... She was in a coma the entire time. It wasn't tacked on. Although, it may have snuck up on people. The sections of the film The Persona, The Anima/Animus, The Shadow, and The Self are all Jungian archetypes and represent Sarah working through stuff before she can wake up. Jeremy, Zoe, etc. may be echoes of people in the real world, but in this context, they're just aspects of her interior mind/life.

There's also some numerology in the clock shots, 7:11 when she wakes up at the beginning, which is supposedly indicative that the universe has a message for you. 10:01, which shows on her phone later is "the mirror time" and indicates your guardian angels are trying to speak to you.

OK, so I (maybe) picked up on some stuff here that made it play as less random for me, but did I love the Jungian/being extracted from a coma/dream ending? Not especially, no. I would have liked to see the shadows with eyes sneak into reality and become a problem. That scene where they seemed about to attack the two sleeping guys was riveting! But they were setting up the coma thing for a while, so it was mostly fair.

I'd say this movie was a potential A+ that failed to stick the landing, because of the unfortunate coma thing. So I'd bust it down to a B-, but with the caveat that lots of parts of it are superlative, and if, like me and many other horror fans, you can enjoy the quality of the parts even when the whole doesn't add up to what it should, it's a good time.
posted by DirtyOldTown at 3:02 PM on February 15, 2022 [1 favorite] 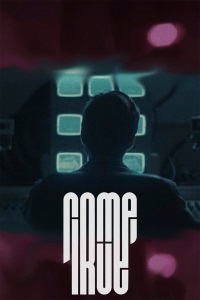