Ten years after her aunt was murdered in their London home, a woman returns from Italy in the 1880s to resume residence with her new husband. His obsessive interest in the home rises from a secret that may require driving his wife insane.


After the death of her famous opera-singing aunt, Paula is sent to study in Italy to become a great opera singer as well. While there, she falls in love with the charming Gregory Anton. The two return to London, and Paula begins to notice strange goings-on: missing pictures, strange footsteps in the night and gaslights that dim without being touched. As she fights to retain her sanity, her new husband's intentions come into question.

Bosley Crowther: But it must be stated frankly that the film doesn't match the play, mainly because of circumstances of an ambiguous physical sort. The play, by its rigid confinement within the limitations of one room, prevades the spectator with the horror and frustration of a claustrophobic mood. One is dragged imperceptibly right up there into that room and made to experience the same emotions as the bewildered and fear-driven wife. But the very flexibility of the camera, the constant cutting away from that one scene, induces the audience to take a comfortably objective point of view. Much of the fearful immediacy of the play is sadly lost in the film.

Ida Belle Hicks: Crime flourishes on the Worth Theater screen this weekend as "Gaslight," the psychological movie that has Charles Boyer playing a villian, comes on to give the patrons cold chills.

Boyer's victim is Ingrid Bergman whom he marries and then attempts to drive insane. The stage production based on the play by Patrik Hamilton is enjoying a long run as a currnt Broadway run under the title "Angel Street".

There's more enjoyment to be gained from seeing the picture with little advance preparation. Close attention to the plot and to Boyer's character build-up are essential if full pleasure is to be obtained.

Jourdain Searles: The only person who seems to have honest concern for Paula – at first – is Miss Bessie (Dame May Whitty), an older woman her meets on a train who later becomes her neighbor. When they meet, Paula is trying to take a trip alone to clear her head; she wants to figure out if she really wants to marry Gregory. But the moment the train arrives at its destination, Gregory appears. He frames it as a romantic gesture, but the truth is he didn’t want to risk giving her a moment of space to change her mind. Time alone would only allow her to see clearly, and Gregory is counting on Paula having a clouded mind.

Gaslight serves as a fascinating depiction of psychological torture. What strikes me about it the most is the way patriarchy and male dominance play out in the narrative. Within the confines of marriage, Paula must answer to her husband. She is surrounded by women but is close to none of them. Nancy is too enamored by Gregory and bitter towards Paula due to his manipulation. The housekeeper takes everything Gregory says at face value, and rarely questions the way his decisions hurt Paula. Gregory keeps Miss Bessie from entering the house, so she is never able to spend any private time with Paula to talk. Paula is surrounded by other women, but none of them can protect her.

It isn’t until Brian appears that Paula gets any chance at a happy ending. The only person that could pry her from the clutches of a controlling man is… another man. Brian’s appearance also gives Paula the strength to fight back against Gregory – in one of the best displays of rage ever captured on film. I would describe it here, but it really needs to be seen (by everyone). Paula’s regained power is somewhat undercut by Brian because their interactions make it obvious that they’ll end up together. I would prefer Paula end up alone and find herself… but I’m a feminist woman in 2017. I can acknowledge my biases. However, I still believe that the great tragedy of the film is that Paula never really gets the space to grow up and find herself on her own terms.

Trailer
posted by Carillon (8 comments total) 3 users marked this as a favorite
My partner had never seen this so we put it on. It definitely was creepy and a slow burn at first. It's funny how it ramps up, definitely starting with him ignoring her boundaries at Lake Como and escalating from there.
posted by Carillon at 2:32 PM on February 27, 2022

The play is where the term "gaslight" comes from, right?

I first saw this not long after seeing Shadow of a Doubt which rendered things a little disconcerting in a "No, don't turn to Joseph Cotten, that will only make it worse!" kind of a way.. Probably I'm the only one with that particular issue with this film but Cotten still always creeps me out in whatever rolls I watch him.
posted by Nerd of the North at 12:20 AM on February 28, 2022

Angela Lansbury's accent seems comical to me; I'm not sure if it would have to contemporary viewers.
posted by Pope Guilty at 8:57 AM on February 28, 2022

Several years ago a woman on reddit who had suspicions about her bf showed it to him
posted by brujita at 11:53 AM on February 28, 2022 [6 favorites]

Gaslight is one of those movies I've seen plenty of times, but I don't believe I've watched it from start to finish in one go more than once. Oh well. Bergman, Boyer, Cotton, all good. The story and script, all good. What impresses me the most about Gaslight is the production. The movie is a fine depiction of the Victorian Age. Look no further than Paula's home, filled with bric-a-brac.
posted by Stuka at 2:17 PM on February 28, 2022 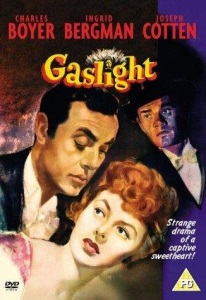