Gunned down by Detective Mike Norris (Chris Sarandon), dying murderer Charles Lee Ray (Brad Dourif) uses black magic to put his soul inside a doll named Chucky -- which Karen Barclay (Catherine Hicks) later buys off the street for her young son, Andy (Alex Vincent). Soon, Andy realizes the doll is alive and dangerous, but unless he can convince an adult of this, he may become Chucky's next victim.


The original 1988 film, directed by Tom Holland (Fright Night). Based on a screenplay by Don Mancini, John Lafia, and Tom Holland.

Roger Ebert - *** - "Child's Play" is a cheerfully energetic horror film of the slam-bang school, but slicker and more clever than most... better than the average False Alarm movie because it is well made, contains effective performances, and has succeeded in creating a truly malevolent doll. Chucky is one mean SOB.

Currently streaming in the US on Starz, and available for digital rental in all of the usual places.
posted by DirtyOldTown (9 comments total) 2 users marked this as a favorite
This is... actually good?

Our kiddo, who is a big fan of the Chucky tv series (which is a total delight, btw, dark, funny, prominent LGBT characters, gore, jokes, and scares) asked if we could go back and watch all of the original Child's Play series. I remembered thinking this was just fine at the time, but going back to watch it, it's... pretty good. It's not Dr. Zhivago or anything, but it's a clever idea executed just about perfectly by Holland, who was one of the best studio horror directors working at the time.

Released towards the end of the first gen of slashers, Child's Play combines the slasher genre with the evil doll genre to terrific effect.

It's interesting seeing the changes in the series over time. Back at the beginning, with Chucky not yet a horror icon, Holland and his team used every trick they could to make Chucky creepy and scarier: keeping most of his first actions as off-screen or blink-and-you'll-miss-it background stuff; and saving his first on-screen line in the Dourif voice for way, way, way in the picture.

They also go to a lot of trouble to being Chucky to life through a combination of basically every practical effect available: puppets, robots, prosthetics, little people in suits. Whatever looks "real" for the concept. There are no cheap/laughable shots.

They really want to sell you on the doll as "alive" in its way and they really want to make very clear that this very sweet six year-old boy is in legitimate peril. That's a nasty edge for a premise but Mancini & Co's script balances horror with humor deftly. This movie isn't a joke, but it knows when to let you laugh a little.

I came to this one pretty late as well, as it's not on as regular rotation or easy to get hold of as the Bride of Chucky or other franchises in the genre. The first film is maybe the most "horror" of all of the series and it's a really solid movie. In large part because Brad Dourif is just so, so good as the voice of Chucky: he nails the exact right tone of gleeful psychopathy. The special effects also hold up surprisingly well.

Child's Play has slowly become my favourite horror franchise and I recently got the whole boxset and watched all the movies back to back in a week. You can tell that having one creative voice involved throughout with Mancini has made a difference. Even when it misses the mark, it does so in interesting ways and Chucky is one of the only slashers that has truly evolved with the times.
posted by slimepuppy at 4:13 PM on March 21, 2022

A lot of the queer sensibility in the series is due to Don Mancini, who wrote most of them and directed quite a few. He was fairly unusual for being out in Hollywood in the late 80s….
posted by GenjiandProust at 5:34 PM on March 21, 2022 [1 favorite]

Haven't seen this in so long. Completely forgot that Brad Dourif was (briefly) in it and did the voicework.

I do recall that it scared the pants off of young me, and that the sequels got progressively sillier.

Agreed regarding the FX, it was very decent puppetry/ animatronics. Bit of a lost artform, that.

Don Mancini is terrific. Interestingly, Cult of Chucky/Curse of Chucky draw on his time as one of the key writers on Hannibal and renew the horror half of the series' horror-comedy equation.
posted by DirtyOldTown at 6:33 PM on March 21, 2022 [1 favorite]

I loved the first Chucky, mainly cuz it was straight up horror. When they turned Chucky into a wise cracking Freddy Kruger wanna be I lost interest in the franchise.
posted by hoodrich at 7:46 PM on March 21, 2022

I don't know why, but I have always had some kind of franchise-specific dyslexia around this series; and have always referred to its films as "Child Splat".
Never one of my favorites (although DOT's point about this one being a masterclass on practical effects is true); but as the 'child-sized doll is very angry and has a knife' genre goes, you can't do better.
posted by bartleby at 10:18 PM on March 21, 2022 [4 favorites]

I bought my younger brother's red-haired toddler a rainbow horizontal striped shirt, overalls, and an iron-on "Good Guys" patch but the ingrates haven't had him wear it even once.
posted by DirtyOldTown at 1:37 PM on July 8, 2022 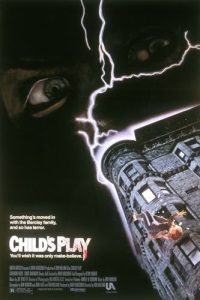