A young Viking prince on a quest to avenge his father's murder.


Article on historical accuracy from Mashable: "A brutal hockey-like sport played to the death. Berzerkers dancing and screaming 'til dawn pre-raid. Shallow, stealthy longboats. Though the narrative may be the stuff of legend, the Viking Age detail in The Northman is rooted in history, and writer-director Robert Eggers took pains to get it as close to the real deal as possible."

Vulture: "The Northman is a gloriously ruthless saga involving sorcery, the immutability of fate, sackings and stormy journeys at sea and a nude sword fight in the shadow of a volcano. But its most notable quality is the way it refuses to bend its characters to the present, preferring instead to make them as alien in their perspective as possible. The Northman doesn’t invite its viewers into its world, but instead dares them to try to catch up."

Pajiba: "Tale as old as time, song as old as the decayed drum-skins on which it’s all been written, Robert Eggers’ bloody brutal and beautiful The Northman casts all twenty-tall and five-wide feet of the Scandinavian god-man Alexander Skarsgård to play the Viking to end all Vikings in the Hamlet tale to end all Hamlet tales."
posted by dnash (15 comments total) 1 user marked this as a favorite
I was waiting for this post! I liked it but not quite as much as The VVitch (so fresh!) Or The Lighthouse (so bonkers!) . And wow, hella gory. But nice to see a big film that isn't a remake, sequel, or MCU.
posted by emd3737 at 5:49 PM on April 23 [3 favorites]

We enjoyed it, but it suffered from Christian-Bale-as-Batman dialogue delivery. Too many times I couldn't understand what a character was saying. I'd love to rewatch with subtitles.
posted by cozenedindigo at 10:40 AM on April 24 [2 favorites]

nice to see a big film that isn't a remake

Well actually it's a remake of etc. etc.

Somehow that was exactly the movie I expected it to be. I loved it.

I bet the version Eggers would have made with no studio requirements to contend with would have been even more bonkers, if perhaps a little less metal.
posted by hototogisu at 1:19 AM on April 26

What The Northman presupposes is what if Hamlet was heavy metal as fuck?

I loved it. Eggers just keeps making movies that land with me. Maybe could've done with 15 minutes shaved off but I was utterly drawn in. No one does a sense of place and time as well as he does.

Put this in a triple bill with Mandy and Valhalla Rising and ascend.
posted by slimepuppy at 3:59 PM on April 27 [2 favorites]

I really couldn't believe how much I loved this. I love it. It may have been the first movie I've seen that I actually cared what was happening in the 'vision' scenes. It felt very much of the time but brought to life. I always hate in these types of films where they soften the hardness to make a character more palatable to a modern sensibility and I really didn't feel that here at all. It was shocking emotional too, both the last boat scene and then the actual end. I was surprised at how well they hit me.
posted by Carillon at 6:46 PM on May 1

I went in to this movie ready to love it, but was let down by such a bad plot. Like, really cliched predictable plot. It was so disappointing.
Some of the good things included the production design, the fact that they explicitly showed how much the Vikings relied on slaves, and that magnificent Valkyrie.
It is also annoying how many people involved have felt the need to exaggerate (or outright lie) about how the film was made. Cinema is cinema, we know it is not real.
posted by Megami at 11:27 PM on May 2

Well I don’t know if I’d ever recommend a Robert Eggers film to anyone on the basis of plot.

Loved the Hamlet But Bonkers and Totes Metal aesthetic, but felt a bit let down by the movie itself. Overlong, and weirdly it wasn’t the cray cray bonkers Bjork that dragged.
posted by arha at 4:07 AM on May 7 [2 favorites]

Whoa, I didn't even realize that was Bjork.

Did the Valkyrie have braces?

Anyway, this would definitely have been the version of Hamlet I'd have written at age 15 while listening to Metallica. The dialogue was about at that level.

Given The Lighthouse, expected it to be weirder instead of extremely straightforward (plot, dialogue, even visuals?) Pretty enjoyable though. Not sure why it's flopping at the box office, given the generally positive reviews and genre.
posted by gwint at 8:59 PM on May 9

I actually appreciate the straightforward plot, having grown weary of the never ending and often implausible twists and turns that plague so many comparable works. And I enjoy seeing the regular character players that pop up in such movies. I only wish I could see them front and center more often. It's nice to see Kidman playing an offbeat (for her) character prominently, in spite of the baggage someone of her esteem may potentially bring along.

Unfortunately, I don't think anything Eggers has done matches the tightness and intensity of The VVitch. Not than his other work is bad at all. I think most film makers cant touch his authenticity and vision. I just think he hasn't surpassed that first effort.
posted by 2N2222 at 5:50 PM on May 15

This is my second favorite movie where the main character loses consciousness and finds himself flying around with a Valkyrie.
posted by condour75 at 6:23 PM on June 22

Damn, this was pretty on the eyes.
posted by porpoise at 9:26 PM on July 8

Loved it. A film under 2.5 hours with a linear plot! Excellent drums and strings throughout. Subtitles are a must though.

Was also wondering about the braces?
posted by iamkimiam at 12:42 AM on July 15

Apparently the braces were mostly-historically-accurate teeth tattoos.
posted by kaibutsu at 11:43 PM on September 9 [1 favorite] 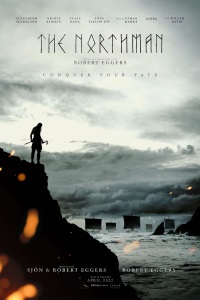