Set in 1999, Claire's life is forever changed after she survives a car crash with some bank robbers, who enlist her help to take the money to a drop in Paris. On the way she runs into another fugitive from the law Dr. Farber, an American who is being chased by the CIA. They want to confiscate a device his father invented which allows anyone to record their dreams and visions. On the run they travel the globe from Berlin to Lisbon to Moscow to Tokyo, ending up in Australia at his father's research facility, where they hope to play back the recordings Farber captured for his blind mother.


I saw the 158 minute version in the theater back in the day, and am working through the 287 minute version now. The soundtrack is a big draw, of course, and the retro-futurism is amusing 30 years on. But what strikes me most is how backward-looking the film seems now. It evokes classic Hollywood from the Hope/Crosby Road films to It’s a Mad Mad Mad Mad World. The gender politics are painfully 80s/90s (I remember identifying with Sam Neill’s Gene character back then and now he’s so obviously awful): Claire is front and center, but never given a strong personality to call her own.

I remember the plot making not a lot of sense and making huge leaps, which seems inevitable when you cut two hours of runtime. Supposedly the initial cut was 20 hours long though. I wonder if Wenders could recut it into a series now that the media environment is different. Probably no one would want that.

It’s funny what passed for “artsy” film in 1991. A few skewed camera angles, a slew of subtitles, and a big dollop of casual female nudity. But the biggest thing that sets it apart from a blockbuster is that all the characters seem depressed. If they were just a smidge more enthusiastic, this isn’t far off of what could be a John Cuzack or even Arnold Schwarzenegger vehicle.

We broke for the night at 2:10 or so, heading to Australia, where my foggy memory recalls it changing into kind of a completely different movie. I’ll update after we finish the rest.
posted by rikschell (17 comments total) 4 users marked this as a favorite
It’s one of my favorite ponderous films. It’s extremely ponderous.
posted by sonascope at 11:00 AM on May 22 [4 favorites]

I haven't seen this since it's intital release so most of the details are hazy but (even though I was a fan of everyone involved) I do remember being underwhelmed by most of it until the bit about dream addiction near the end.

This movie is a longtime favorite, for the story line and the visuals. The 300-minute European version ("director's cut" is the sole reason I performed my first and only hardware hack to make my DVD player completely region-free.

And if/when I ever need to be transported back to the early 90s, the soundtrack brings it.
posted by vers at 11:53 AM on May 22 [2 favorites]

Also, Wim Wenders is who I want to direct a film made based on one of Richard Powers' books.
posted by vers at 11:58 AM on May 22 [2 favorites]

This one is long, but it has a couple of natural spost for pausing if you don't want to watch it all in one go. I enjoy the front and back thirds of this movie. This middle is not exactly bad, but also not really compelling enough to justify the added runtime even if it is consistently gorgeous looking. One thing I really like about it is it is one of those movies where you would never predict where it ends up based on where it starts.

I enjoy that this movie predicts social media addiction and the way technology magnifies and reinforces our narcissistic tendencies a good 10 years before MySpace. I think the last third could easily stand on its own and I think it still feels relevant, perhaps more so, today.
posted by forbiddencabinet at 3:05 PM on May 22 [1 favorite]

I saw a cut of this many years ago on cable - no idea which of the many edits - and loved it. Had the soundtrack on CD ever since. I've now got the Criterion edition, which is the 287-minute cut. It is indeed long and ponderous, but just when you think you're ready to check out, it will do something beautiful or amazing in some way.

I'm prepared to forgive this film a great deal.

Trailer a little ways down that Criterion link, BTW
posted by Naberius at 3:47 PM on May 22 [1 favorite]

Seconding the remark about the soundtrack. The haunting quality of this film may be owed largely to its soundtrack.
posted by CheesesOfBrazil at 4:13 PM on May 22 [1 favorite]

I love the Bounty Bear animation
posted by Morpeth at 4:56 PM on May 22 [4 favorites]

The soundtrack was a crucial cassette for me in high school. And it is better than the film, though the film seemed magical and exotic at the time.
posted by Kitteh at 6:45 PM on May 22 [2 favorites]

ARE YOU KIDDING ME? Sam is saved by sleeping between two selfless Black men and Claire is saved by having her life mansplained to her by her stalker ex-boyfriend??? I'm not prepared to forgive this film THAT much.

I enjoyed a lot of the journey, but the destination sucked.

My wife kept predicting that Sam Neill would be the hero the whole time, and I kept saying "pshaw, but he's so obviously awful!" And of course she was right. Ugh ugh ugh.

The best part was when Claire and Edith were watching the women dancing and saying how men never get it right and are constantly screwing everything up. So the filmmakers had a sliver of self-awareness, and yet not enough to keep themselves from replicating the exact same dynamic.
posted by rikschell at 9:14 PM on May 22

So many feels about this movie. I'm glad the soundtrack and the bounty bear were already mentioned, because they're both fantastic. That whole sequence at the start in Venice is amazing and I think I spent a bunch of my twenties sort of unconsciously looking for precisely that party. The futuristic predictions were so hit-and-miss-- I remember there being a throwaway line about how it must have cost Claire a fortune to transmit a video from China (far away was not considered so close, I guess) and the videophone booths, both of which seem ridiculous now. But they also nailed a few things, like the GPS and the video call with the doctor (in the belly of a godzilla toy!), that wouldn't really be widely available until closer to 2010. Somehow it was a sci-fi film that didn't feel like sci-fi. Aside from the macguffin, the future tech wasn't really a focus of the plot. It was just the environment that the characters were moving in.

The whole thing is such a kitchen sink, though, that while there are some really fun ideas in here, there's also a ton (already discussed above) that are objectionable or just dumb. I've seen both versions, and I think that's probably enough. It was an incredibly ambitious film, though, and I'd like to find others like it in that sense.
posted by phooky at 8:54 AM on May 23 [1 favorite]

I love this weird mess of a film, even the five hour version, which I saw at a screening in the nineties. For all its crackpot plot twists, it really nailed the idea of people getting addicted to their personal devices.
posted by roger ackroyd at 5:42 PM on May 23

The soundtrack of this film still ranks as one of my all favourite albums I still listen to it on a regular basis.

The movie is wonderfully ponderous. It is a giant hit of 90's nostalgia for me.
posted by fimbulvetr at 7:14 PM on May 23 [1 favorite]

I have had, "I'm searching... I'm searching..." in that bear voice living in my head since I first watched this thing. It's a reference I knew nearly nobody I knew would get, but any time I did any web search at someone else's request, be it work or family or whatever, knowing it would be missed, I never said it out loud, just gritted my teeth and watched Bounty Bear dance behind my eyes.

I saw a trailer for this movie, once, and the line, "The camera takes pictures that blind people can see," was enough to get me to want to see it, but of course no theater was showing it anywhere in my neck of the actual woods, so I had to wait until years later to buy it on tape to see it.

I still have the theatrical cut of this on VHS, somewhere, and I looked for a DVD of that cut, but could only get the five-hour cut on disc. Goddamn, it is tedious. The two-and-a-half-plus hours version is a bit slow even for me, but it's a rollicking adventure of Jason Bourne pacing compared to the early-Discovery-Channel travel reel version.

To add to the list of things that don't age well, Claire's sign-off at the end of her call from China is racist af, but it's supposed to be like cute racism or something? I remember thinking that was pretty gross even at the time, but chalked it up to "Europeans, whaddya gonna do?" which is just me kicking the can down the racist road, I guess.

Seeing the long version took most of the remaining polish off my memories of this movie, for one reason or another, but the "Blood of Eden" sequence is still probably the best thing about the whole movie.
posted by Mister Moofoo at 10:03 AM on May 24 [1 favorite]

I understand why the closing Robbie Robertson song didn't make the soundtrack (it wasn't very good), but it's weird the Peter Gabriel song that would go on to be a classic (albeit in a different mix) didn't make the cut. It's no wonder so many great artists participated. The ask was a perfect challenge: give me a song from ten years into your future. The idea helped propel U2 to completely rethink their sound. Meanwhile, Talking Heads gave the last song they'd ever make together. It's fun to listen to the soundtrack and imagine a less-flawed film to go with it.
posted by rikschell at 3:25 PM on May 24 [4 favorites]

Flawed as a film but for me so endlessly watchable it rises above most "good" films. Remains an all-time favorite, especially the director's cut. Wish Wenders would release a twelve hour version, more can only be better.

The Blood of Eden CD single has the movie edit of the song, far superior to the album edit (sorry Sinead).
posted by lefty lucky cat at 6:30 PM on May 28 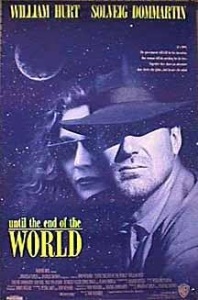