From his childhood in Tupelo, Mississippi to his rise to stardom starting in Memphis, Tennessee and his conquering of Las Vegas, Nevada, Elvis Presley becomes the first rock 'n roll star and changes the world with his music.


Elvis is an evergreen subject for biopics, and I was not particularly interested until I learned it was directed by Baz Luhrmann—that sounded interesting, and the movie telegraphs its director right from the opening frame. It is told through Elvis' relationship with Col. Tom Parker, who narrates the film.

It paints a sympathetic portrait of The King, downplaying his debauchery and showing him as a three-dimensional human being rather than just a show-business monument. Makes an effort to highlight his roots in black music, and the controversy that engendered at the times.
posted by adamrice (9 comments total) 3 users marked this as a favorite
Luhrmann's films are always trainwrecks, but never boring.
posted by Jessica Savitch's Coke Spoon at 5:17 PM on June 26, 2022 [3 favorites]

(This will be streaming on HBO Max August 8th for people who don’t want to go to the theater!)
posted by skycrashesdown at 9:34 AM on June 28, 2022

Just got home from seeing this and thought it was stunning. Worth seeing on the big screen.
posted by Coaticass at 12:39 AM on July 5, 2022

So it isn't so bad if you just skip over the Tom Hanks parts. I had a feeling this would be bad when Tom Hanks was on Colbert or something and when asked about the makeup he made a sort of disparaging comment about "Who knows what the colonel even looks like?" which I think was his way of saying how unnecessary the colonel was to this. We know that Tom Hanks can act so it obviously isn't his fault, but if he dropped the weird Dutch accent and circus thing it wouldn't have been bad.

Yes, yes I know the colonel was overweight, dutch and a circus ring leader, but he's nowhere near the larger than life figure Elvis is. I think if you let Tom Hanks just do a southern accent, minimize colonel to just a few scenes and made it more Walk the Line you would have had a hit movie. The Elvis singing and dancing scenes were great, make it just a complete rip off of the Cash movie and make it about Elvis, his mom, the women, drugs and Priscilla.
posted by geoff. at 8:23 AM on August 7, 2022 [3 favorites]

It worked for me as a telling of the emotional heart of the story rather than as a literal retelling of history. I've already seen enough dry documentaries about Elvis. And I found it a profound commentary on American society. But then again, Luhrman has always been my kind of technicolor lunatic, so mileage may vary.
posted by The Underpants Monster at 2:11 PM on August 10, 2022 [2 favorites]

I also personally felt that the casting of Hanks was brilliant. It may have been exaggerated for the movie, but Parker did speak with a noticeable hybrid accent. He did start out as a carny.

And who else do you get to play a man who to the eyes of any objective observer was committing cartoon levels of villainy, not only having his mark convinced he was their best friend but even sometimes seeming to swallow his own line and not see himself as the bad guy in the situation? You get the actor known for being the nicest guy in America.

To me it feels like a natural progression from playing Walt Disney in Saving Mr. Banks - a man who believed he was doing meaningful work and simultaneously being ruthless and throwing his weight around while carefully curating his public image as America’s genial, fun uncle.

I think any downplaying of Parker’s role in Presley‘s story would have been a misstep.

“The only thing that matters is that man getting on that stage tonight” is something that should resonate with a whole lot of American workers who know their livelihood, their survival even, depends on going to work when they’re seriously ill because of a dysfunctional management class that feels the same way.
posted by The Underpants Monster at 10:27 PM on August 10, 2022 [4 favorites]

I didn't expect to like this, but I did. Elvis's life was huge, in its way, his talent was immense, his place in our culture is complicated and does not lend itself to being easily summarized. Treating him as an exciting enigma (instead of trying to pin him down) and then focusing on how Parker repeatedly clipped his wings was a good way to get a handle on a movie length story.

Hanks did play Parker as a cartoon, but Parker kinda was a cartoon.
posted by DirtyOldTown at 6:36 PM on September 5, 2022 [1 favorite] 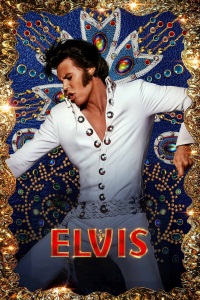