A law student regularly visits a Paris bakery to flirt with a brunette employee.


A man who sees and falls in love with a woman he passes in the street, but he does not know how to talk to her. When he finally speaks to her, she disappears and he conducts a daily search for her in the same area. During his search, he acquires a habit of visiting a bakery for a snack. Over time, the "girl" in the bakery becomes interested in him and he starts flirting with her and eventually convinces her to go on a date with him. Before the date begins, he runs into the woman that he was searching for and is forced to choose between them.

Richard Brody: Anchoring flashy dialectics and moral fine points in a precise grid of geography and local customs, he depicts a law student (Barbet Schroeder) who, frustrated in his efforts to date Sylvie (Michèle Girardon), an elegant art-gallery assistant, sets his sights on the coarser charms of Jacqueline (Claudine Soubrier), the shopgirl of the title. Contrasting the action with the young man’s self-justifying narration, Rohmer binds the universal drama of love and lust to the specifics of one little corner of Paris. He presents a breezy view of the neighborhood and a pensive view of his characters while musing, throughout, on higher matters, including his lifelong, quasi-metaphysical ideas—the intimation of chance as destiny, and the deferral of pleasure in hope of true love. The carnal brusqueness with which the young man casually paws Jacqueline suggests the raging fires that Rohmer aims to bank.

New Wave Film After the indifferent response to his first feature Le Signe du Lion (1959), Eric Rohmer embarked on an ambitious plan to make six films all based around a common theme and a similar plot. The first of these La Boulangere de Monceau established the basic premise of the series: a young man committed to one woman is tempted by the attractions of a second woman and must decide between them.

The narrator tells most of the film retrospectively. According to Rohmer: “My intention was not to film raw events, but the narrative that someone makes of them. The story, the choice of facts, their organization... not the treatment that I could have made them submit to. One of the reasons that these Tales are called "Moral" is that physical actions are almost completely absent: everything happens in the head of the narrator.

Made on a low budget, the film was shot on 16mm black and white and is only twenty minutes long, however it sets the tone and style of the series. Rohmer’s strict adherence to realism convinced him to only film during the time and in the place that the film was set. There was no use of sets, no artificial lighting and no non-diegetic music, only what was played in the background as part of the setting.

Erin: For all of this self-awareness, however, the images and dialogue suggest that the young man isn’t the most reliable of narrators. He talks about Jacqueline’s “advances,” but these appear to have consisted of little more than smiles and simple friendliness. Certainly, when he became more forward, she evaded or rebuffed his invitations for a date again and again, and even when she finally relented, she didn’t exactly seem thrilled by the prospect. Her evident discomfort is understandable. Not only was he several years her senior (“I’m only eighteen,” she pointed out, while he must have been well into his twenties), but he got downright pushy and intrusive: ignoring her request that he leave her alone, encouraging her to lie to her parents, caressing her neck — all before he bothered to find out her name.

This unsettling behavior is a far cry from his deference toward Sylvie. In his mind, Jacqueline was Sylvie’s inferior and his own (whether in looks, class or some other area isn’t stated), and consequently not above such obnoxious treatment. “What upset me was not that she liked me, but that she’d think there was any way I would like her,” he says, an attitude that he now appears to regret. (“As if to justify myself in my own eyes, I told myself it was her fault, that she must be punished for playing with fire.”) Still, he takes her interest in him for granted, never questioning it, at least not openly. (It isn’t impossible, of course, that he has private thoughts on this episode that he doesn’t care to share, things that don’t fit into the narrative as he wishes to present it.) He feels guilty about toying with her affections without realizing that his failure to show up for their date may have been a great relief to her. Significantly, when he entered the bakery for the first time, another man was harassing Jacqueline. “What an idiot! He gets on my nerves,” she said when he left, blowing her a kiss as he closed the door. The narrator makes no comment, either in the moment or in his voiceover. Maybe, looking back, he sees more of himself in this man than he wants to admit; then again, maybe he was just oblivious.

Trailer
posted by Carillon (1 comment total) 3 users marked this as a favorite
I loved his increasing bakery order. The strong disconnect between his behavior and narration though is pretty masterful. I did say at one point aloud "I hope he gets hit by a car" but thought it was pretty powerful separating out his macho, internal narrative from the facts. Sadly he reminds me of a few people I knew in high school, who were so caught up in their own narrative that they didn't see women as human beings in their own right. It read to me as a very strong critique of the patriarchy and men's views of themselves.
posted by Carillon at 8:02 PM on June 26, 2022 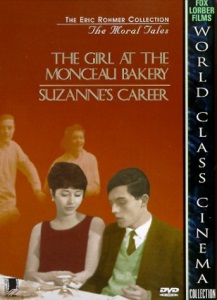