The friendship of Bertrand and Guillaume is complicated when the womanizing Guillaume begins to pursue a charming girl named Suzanne.


Bertrand bides his time in a casually hostile and envious friendship with Guillaume. But when Guillaume seems to be making a play for the spirited, independent Suzanne, Bertrand watches disapprovingly

Daniel Barnes: Of course, it has already become evident that Rohmer’s strengths are not visual but rather schematic. Like the rest of his “Six Moral Tales,” Suzanne’s Career concerns a shy and repressed man who gets tempted by another woman. However, Rohmer’s real fascination is with the line between inaction and moral decision. The ineffable mystery of Rohmer’s films springs from the unexpected and often subversive ways in which those moral choices get presented and resolved.

In Suzanne’s Career, the painfully weak-willed Bertrand is such a shrinking violet that the film is nearly a quarter over before we realize he’s our narrator and protagonist. We get the impression that Bertrand narrates the picture only because he is too spineless to speak his mind out loud. He is best friends with Guillaume, a brash and spoiled cad who uses Bertrand as a pawn to bed girls. Bertrand finds these conquests, including a sweet and simple career girl named Suzanne, “not worthy” of his friend. He shows a puppy-dog admiration for the aggressive Guillaume that will have moral consequences when some money goes missing.

New Wave Film: The second of Eric Rohmer’s “Moral Tales” series, La Carriere de Suzanne (Suzanne’s Career) expands upon themes established in La Boulangere de Monceau (The Baker of Monceau). Again shot on 16mm black and white film in and around Paris, using a cast of young unknown actors, the film lacks the clarity and precision of its predecessor. Nonetheless, the story is engaging, and the naturalistic dialogue and use of real locations gives one a sense of observing real people living real lives. As before the main character narrates much of the story, commenting on events as they occur. Although this time he doesn’t get the girl, his realization of what a fool he’s been, at least suggests that he is capable of changing his ways in the future.

The DVD Journal : Bertrand (Philippe Beuzen) is best friends with his college buddy Guillaume (Christian Charriere) and something of his wingman. Guillaume gets all the ladies, with his most recent being the working class Suzanne (Catherine See), and he uses Bertrand to help get her to spend the night with him. They date for a while, but Guillaume grows bored and begins exploiting Suzanne by making her pay for everything. Bertrand has been pursuing Sophie (Dianne Wilkinson), but he can't seem to get a handle on her. After Guillaume and Suzanne break up, there's some time where it seems that she wouldn't mind going out with Bertrand, but he never works up the courage to do anything about it. The second entry in Eric Rohmer's "Six Moral Tales," 1963's La Carriere de Suzanne ("Suzanne's Career") is easily the most minor of the series and runs a brief 55 minutes, but it is not without its pleasures. Here the main character is not so much caught between two women as he is an observer of another relationship. Rohmer's great gift is presenting his character's ideas of what they think is going on, while the reality of their situations presents a text that doesn't necessarily correspond to the protagonist's thoughts on the matter. As such, though Bertrand denies its presences, there's an underlining sexual current to his relationship with Suzanne, and she seems more able to express her interest than he does. Her relationship with Guillaume was obviously abusive, and she masochistically took it, but as the coda shows, there was much less game-playing going on than the main character realized. The greatness of Rohmer's Moral Tales is how he shows his male protagonists in their most naked and self-involved states. And though this episode doesn't offer the same sort of penetrating dissection of the male Id, it does work as a showcase into the mind of a passive male who thinks about things to the point of paralysis

No trailer found
posted by Carillon (1 comment total)
I thought this was pretty good! Mainly on the basis of Catherine See, her performance was really great. It's slow, but interesting. Continuing the trend from the first one where what the narrator describes is pretty undercut by the actual action. The amount Guillaume takes advantage of everyone and really only Bertrand can't see it is darkly amusing, as is his insistence that he really needs to study before being swept away to a party. Lastly, I really liked seeing what I think are books that didn't have their edges cut, it's very rare these days, but fun to see it was still a thing.
posted by Carillon at 12:54 AM on June 28 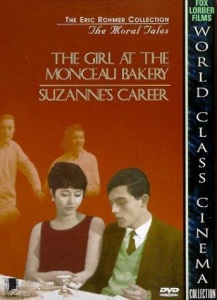