Deep in the heart of Jakarta's slums lies an impenetrable safe house for the world's most dangerous killers and gangsters. Until now, the run-down apartment block has been considered untouchable to even the bravest of police. Cloaked under the cover of pre-dawn darkness and silence, an elite swat team is tasked with raiding the safe house in order to take down the notorious drug lord that runs it. But when a chance encounter with a spotter blows their cover and news of their assault reaches the drug lord, the building's lights are cut and all the exits blocked. Stranded on the sixth floor with no way out, the unit must fight their way through the city's worst to survive their mission. Starring Indonesian martial arts sensation Iko Uwais. An Indonesian production, written, directed, and edited by Welsh filmmaker Gareth evans.


Released in the US as The Raid: Redemption, due to a rights issue with the title.

Currently streaming on HBO Max and available for digital rental via multiple outlets.
posted by DirtyOldTown (11 comments total) 3 users marked this as a favorite
this was.... an AMAZING movie. Watched it a few times for the whole story, then later a few times for the excellent fight scenes, and now I re-watch just to admire the choreography and camera moves. SO good!
posted by alchemist at 12:27 PM on June 30, 2022 [1 favorite]

Love this movie. You get less then five minutes of story set up and then it's balls out action all the way to the end. Amazing. Wasn't thrilled with the sequel - mainly because it didn't do what this film did - which was tell it's story mainly through action sequences. All the drama between it's set pieces didn"t give you the same roller coaster ride as this one. The Raid is martial arts at its best.
posted by hoodrich at 1:46 PM on June 30, 2022

Released in the US as The Raid: Redemption, due to a rights issue with the title.

I saw this in the theater and I have six or seven “screen shots” on my old Blackberry of the extras who played the bad guys. Hood Drop Attacker #s 1-8. Carrying Bowo Fighter #s 1-18. This movie blew my mind.

The sequel I like more for the same reason I like John Wick 2 more—it’s the sprawling modernist novel after the first films’ perfect short stories. But as with John Wick the first, I can’t imagine anything being added or taken from this movie—it’s perfect.
posted by hototogisu at 10:16 PM on June 30, 2022

For all the guns and shooting in this movie, it's the knife-fighting that always makes me shudder and shout "Jesus Christ!" They don't just stab, and they don't just stab multiple times, they stab and then rrrrrip the freakin knife through the other dude's flesh. Brutal to the Max, Yo.
posted by Saxon Kane at 2:24 PM on July 2, 2022

Thank you cardioid. I was trying to make that connection. Dredd was solid and lean.
posted by whuppy at 11:50 PM on July 2, 2022

Also remade in the US as Dredd, due to an issue with creativity.

Dredd’s about as British as productions come, short of an actual “BBC” production card on screen.
posted by a box and a stick and a string and a bear at 6:55 PM on July 3, 2022

I believe they were suggesting that particular adaptation of the pre-existing Dredd character chose its film plot by riffing on The Raid.
posted by DirtyOldTown at 7:10 PM on July 3, 2022

Yeah, I got that. I was just questioning the “remade in the US” part, since Dredd wasn’t a US production in any sense.
posted by a box and a stick and a string and a bear at 7:22 PM on July 3, 2022

(I think the very Americanized first Judge Dredd movie holds much of the blame for convincing people that he's an American creation...)

I have a confession about The Raid: I thought it was kind of slow at the beginning. There's the raid, there's a shootout, things get all fucked, but there's not much action -- at least, not the martial arts kind I signed up for -- until nearly halfway through the movie where Iko Uwais starts kicking ass in the hallway.

And then it never stops. The second half of this movie is relentless, holy Christ.

Also I'd like to point out that Yayan Ruhian, aka "Mad Dog" shows up in The Force Awakens for about five seconds as a member of Han Solo's crew. 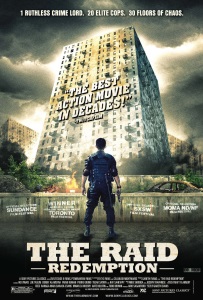