A womanizing art dealer and a painter find the serenity of their Riviera vacation disturbed by a third guest, a vivacious bohemian woman known for her long list of male conquests.


A young man (Patrick Bauchau) tells himself high ideals are what kept him from sleeping with a temptress (Haydée Politoff) staying at the same St. Tropez boarding house.

Roger Ebert: "La Collectionneuse," which refers to a female collector (of men, in this case) centers on a young woman named Haydée who finds herself living at the villa with Adrien and Daniel, two friends about ten years older than she is. They watch her being picked up by a series of young guys who drive up to the villa and then speed off to the fashionable beachfront city, bringing her back after dawn. Both men claim they have no desire to sleep with her, and talk themselves into an undeclared contest to see which will be the first to succumb.

This assumes that Haydée can be had for the taking, which is by no means the case. The film is narrated by Adrien, and information is filtered through his unreliable opinions of Haydée and Daniel and his high opinion of himself. There is no scene at which he isn't present, but since he can't control what is said, we are invited to arrive at our own conclusions. Rohmer had a deliberate narrative style that postponed or sidestepped events that a conventional director would have supplied right on schedule. The Moral Tales demonstrated that his characters were not fated to do obvious things, and reserved the option of thinking about the meaning of their actions. They were not invariably moral, nor was their alleged morality necessarily one we would agree with.

Vincent Canby: is triumph — through a fortuitous accident that allows him to exercise his free choice—is of almost indecently limited application.Much of the comedy in "La Collectionneuse," as in Rohmer's later films, is provided by the otherwise aware hero's elegant self-deceptions about his own motives, followed by his dimly seen perceptions of what could be another truth. In this context, it is a momentous event (and, comparatively speaking, momentously funny) when Adrien begins to have doubts about the affair of Haydée and Daniel. "I couldn't be sure," he tells himself with complete seriousness, "that their complicity was entirely for my benefit."Almost everything in "La Collectionneuse" is of a slightly more gross and less interesting order than in "My Night at Maud's" and "Claire's Knee." Everything, that is, except Nestor Almendros's camerawork, which is as susual, beautiful. It's as if the film were a kind of living notebook for what Rohmer was to do later, with greater ease and refinement. It's no mere coincidence that in his last film Rohmer was able to say about all he had to say with Claire's right knee, but when he introduces Haydée, in a bikini, his camera has to make a complete inventory of her—thigh, small of the back, arm, nape of the neck, and both knees.There is a certain chilliness and lack of spontaneity to all of the performances, especially Bauchau's, which, I suspect, has as much to do with the tiny scope of the film as to the actor's talents. "My Night at Maud's" and "Claire's Knee" suggest living worlds outside the films' rarefied milieus, whereas "La Collectionneuse" exists in splendid, arrogant isolation. Adrien is tiresome. Daniel is enigmatic, and Haydée is sweet, and great to look at, but, after a while, sadly commonplace.A note of interest to local film buffs: the Seymour Hertzberg who is listed in the credits (he plays Sam, the American art collector whom Adrien solicits), is the nom d'écran of Eugene Archer, a former New York Times film reviewer who, I'm told, has absolutely no intention of acting again. He is an excellent reviewer.

Jan Dawson: With the move to the villa, the objective technique of the prologues is replaced by Adrien's subjective commentary. And as Haydee abandons her indifferent promiscuity to concentrate on an affair with Daniel, Adrien's contempt for her grudgingly turns to fascination. But just as he fails to recognise Haydee (whose smile on her own admission means absolutely nothing) as the incarnation of that empty state of being to which he and Daniel in their different ways so cerebrally aspire, so Adrien fails to perceive his own extraneousness to the affair between her and Daniel, preferring to interpret her every act as a gesture calculated for its effect upon himself. His commentary (here dubbed into English with sadly disjunctive results) becomes a humorous object-lesson in the pitfalls of interpretative criticism.

This irrelevance of theory to physical reality is heightened by the graceful camerawork which, as Adrien's constructions become more and more tortuous* focuses increasingly not just on the beauty of the southern landscape but on isolated objects—a basket of salad* the American's Song vase* an armchair—captured in the elementary process of existing and unaffected by the theories so ingeniously imposed upon them. By the time Daniel has hurt Haydee and moved on to create a new vacuum in which to function* Adrien has become so enmeshed in his own fantasy constructions that he runs away from the girl when she is finally willing to accept him as her lover, leaving her, disillusioned by art and philosophy alike, to continue her difficult quest for *des rapports normaux et possibles avec Jes gens\ Left alone in the villa* Adrien congratulates himself on having fortified the crumbling fortress of his morality. Free at last to perfect himself in the art of doing nothing* he appears to discover that without either art or audience he is nothing, and reaching for the ’phone arranges to join his girl friend in London

Trailer
posted by Carillon (1 comment total)
I enjoyed this one a little less than some of his others. The random, pretty sexist attacks from Daniel and Adrien felt off to me. She even says at one point if you just minded your own business things would be better. I'm not sure I buy her finally being interested in him at the end? Otherwise I loved Haydee and her performance, I thought the visuals were stunning, as a move to color things really pop.
posted by Carillon at 2:43 PM on July 1, 2022 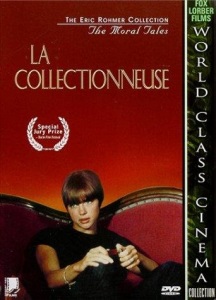