Though he has an adoring wife, a bourgeois man is still tempted to pursue other women.


Eric Rohmer's acclaimed meditation on marital fidelity follows Frederic (Bernard Verley), a successful Parisian lawyer who is happily married to Helene (Francoise Verley), a schoolteacher. Though Frederic daydreams about affairs with other women, he doesn't come close to acting on such thoughts until he runs into Chloe (Zouzou), a beautiful old acquaintance. Tempted by the vibrant Chloe, Frederic is torn between impulsive lust and his love for his wife.

Roger Ebert: You’ll have to decide for yourself if Chloe really wants a baby. My personal notion is that she sees Frederick as merely a difficult exercise in seduction. She’s a plain-beautiful woman who has just enough insecurity about herself to want to use her looks in order to confirm her attractiveness. For Frederick, however, it’s a moral problem: How can he make love to Chloe when (as he believes) he is totally and deeply in love with his wife? Oh, you kid!

This description of the movie may make it sound inconsequential and meandering, but then Rohmer’s movies always sound like that. Who else would make a whole movie, as he did, about Jerome’s desire to caress the knee of Claire? Particularly as Jerome was not even a knee fetishist? What makes Rohmer’s films so sparkling and intelligent is the way in which he watches his characters. Nothing escapes him, and he uses the angle of a glance, the tilt of a head, the precise set of a mouth, in order to create wonderfully complex characters.

The ending of “Chloe in the Afternoon” releases an emotional time bomb that places the movie in a new, and deeper, context. When we see Rohmer’s great last scene, the “moral tales” fall into place. He has not been so very sophisticated after all, we realize; he has just been very good at seeing sophistication for what it is -- the highly developed art of avoiding simple, direct human relationships.

Vincent Canby: In "Chloë" Mr. Rohmer examines monogamous marriage as if it were the sum total of contemporary civilization: the thought of destroying it is natural but also to be resisted for the time being, at least until something better, more practical, comes along. It's a comedy of very funny, complex contradictions, between action and word, between image and sound.Unfortunately, because American audiences must spend a great deal of their time reading the English subtitles that translate the French dialogue, "Chloë," like the earlier Rohmer films, will probably be too easily classified as literate.Much of the wit is verbal, and Mr. Rohmer's screenplay contains absolutely lovely passages, such as the one in which Frédéric describes his love of Paris and its crowds as being like his love for the sea. He says he is not engulfed or lost in the city. Instead, he rides its crest like a solitary surfer following the rhythm of a wave.These passages are impressive, but the reading of them tends to distract the eye from seing what's really happening onscreen: including Mr. Rohmer's way with actors. He seldom photographs them in close-up so that we must make our own choices about what sort of people they are, about what they're thinking and whether or not we can trust them.Although Mr. Rohmer's heroes inevitably opt for the comparatively celibate choice, his films succeed in being immensely erotic. When Nestor Almendros, Mr. Rohmer's superb cameraman, shows us a few square inches of Chloë flesh, it has the suddenly tactile effect of a real—not an imagined—embrace. Most important, just because Mr. Rohmer keeps his focus short, clear and precise, one sees deeply into the lives of his characters without the sort of pretentious distortions of most movies that deal in metapsors. Because Chroë is about what it says it is, it works on more profound levels.

Miles Bethany: A low-key, slightly creepy meditation on infidelity and adjustments to social expectations, Chloe in the Afternoon (1972) marks the culmination of director Eric Rohmer's "Six Moral Tales" series. The film, which traces the trajectory of Frederic, a married businessman, through temptation and an altogether standard midlife crisis, feels remarkably ham-handed, and fails to offer anything more than platitudinous responses to complex problems. Zouzou proves fetching as the title character, a bohemian drifter bent on seducing, and arguably transforming, the comfortably bourgeois protagonist (the dull-looking Bernard Verley); the rest of the cast, given indistinct characters to interpret, rarely provides much excitement. Several scenes--particularly a revelatory encounter between Frederic and Chloe in the basement of a dress shop--do manage to catch fire, but Rohmer dodges the implications of his own creative instincts and undermines his own point by grafting on a pat conclusion that feels cheap and sudden. Lost in the slide toward obviousness is a genuinely intelligent script--one that manages to feel bright without ever resorting to cleverness--and foggy-surreal location shooting in some of the less fashionable areas of Paris. Best suited for repentant philanderers and hardcore Francophiles.

Trailer
posted by Carillon (1 comment total)
I found this interesting in the way Frederic is supposedly fascinated by all these women, that he sees them almost as the true movers and shakers, maybe agents of chaos is a better word. Helene is barred now due to marriage, so he wants or needs someone in his life to make him excited again I guess?

But then it's yeah, easy to fall in love with someone when you've no history, no shared goals or responsibilities. I like that realization seems to come when he sees himself in the mirror taking his shirt off. The monster he plays for his kids maybe is who he is becoming there.

I was curious at the end if we're supposed to read the secretaries as informing the wife, if she was also conducting some affair of her own given the secretive errand that she cancels, or if Frederic's own demeanor is what causes her to cry at the end.
posted by Carillon at 10:32 PM on July 7, 2022 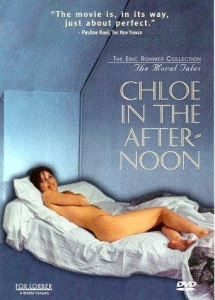