A look at tightrope walker Philippe Petit's daring, but illegal, high-wire routine performed between New York City's World Trade Center's twin towers in 1974, what some consider, "the artistic crime of the century".


Using actual footage from the event seamlessly mingled with new re-enactments, filmmaker James Marsh masterfully recreates high-wire daredevil Philippe Petit's 1974 stunt: performing acrobatics on a thin wire strung between the Twin Towers of the World Trade Center. Plotting his feat like a master cat burglar, Petit enlists the help of a motley group of friends as he calculates every detail, from acquiring building access to stringing up the wire, and manages to pull off an astounding crime.

Josh Larsen: A heist movie and a biography movie and also, I suppose, a documentary, Man on Wire is a thrilling account of Philippe Petit’s 1974 high-wire walk from one of the Twin Towers to the other. Director James Marsh mixes archival footage, black-and-white reenactments and talking-head interviews to not only reveal the amazing details of the feat itself, but something of the psychology behind it.

Occasionally this mixture blurs the line between fact and fiction in unhelpful ways (I prefer to know the source of the documentary material I’m looking at, even as I understand that archival footage itself can be untruthful). Yet the technique also allows for some lovely moments of cinematic poetry. Parallel cutting between Petit’s previous walks – including one across the towers of Notre Dame – and archive footage of the construction of the World Trade Center gives us the impression that these historic structures were conceived for the sole purpose of supporting his wire. In the wake of Sept. 11, 2001, the film also serves as a lovely elegy for their very existence.

Petit proves to be something of a poet himself. Barely able to sit still in his interview scenes, he describes driving into one of New York City’s tunnels as “being engulfed by a monster.” Recalling the first time he became aware of the towers – reading a magazine while waiting for a toothache to be taken care of in a dentist’s office – he says that he immediately left the office to begin his plans. “What’s the pain now that I have acquired my dream?”

At its best, Man on Wire captures the mysterious beauty of Petit’s obsession, without ever being so gauche as to “explain” it. Why would Petit take on such a risk? It’s an obvious question he openly disdains in the documentary, even if his florid description of the walk itself gives something of an answer: “There was peace and immensity and in the middle of all this madness I suddenly had hope and joy.” Sounds like a fair trade to me.

Amy Biancolli: Though we know how it ends, it unfolds with suspense. And though it lacks any discussion of the towers' destruction, it succeeds as a tribute to their birth — and the sense of rubber-necking awe aroused, that day, in anyone who watched from the street or (like me) saw photos later in the news. For 45 minutes on a breezy August morning, Petit crossed the wire, lay down on it, knelt on it, and connected us with the sublime.

At 60, he's still a wire walker — the proper term. He's been upward bound since boyhood, chasing an impulse that's taken him up Notre Dame Cathedral and the Sydney Harbour Bridge. In interviews, Annie Allix, his lover at the time, talks of Petit's determination and high-flown commitment to his art, but friends and accomplices describe someone who didn't always consider the real-world dangers of his scheme.

He was, he says, meticulous in his preparations and reconnaissance of the building. He and his faction managed to sneak themselves — plus tons of equipment — up to the top of the Trade Center. To string the cable between the towers, they shot a fishline between the rooftops with a bow and arrow.

But there were close calls; there were long hours shuddering in darkness and hiding from guards; there were conspirators who bailed at the last minute, terrified of the consequences.

The film itself calls 's walk "the artistic crime of the century", which seems only slightly over the top, given the heights the Frenchman reached when he stepped out above Manhattan at dawn on August 7, 1974. As word spread, a crowd of awed New Yorkers gathered, not sure at first what they were seeing. Then the police arrived on the tops of the towers and vainly ordered him to come in.

For 45 minutes he ignored their calls while dancing back and forth across the wire eight times.

The film keeps this sequence for its climax. It begins playfully by plunging you into what looks like a heist movie. Hurried preparations are being made. Fears are being voiced. A van is driven at night through the streets of Manhattan.

Then two of 's closest friends take up the story, relating it in flashback in recently filmed interviews. The first is Jean-Louis Blondeau, a photographer who grew up with in rural France; the other is Annie Allix, 's first girlfriend, who, as a teenager, abandoned any ambitions of her own to help him realise his.

Trailer
posted by Carillon (6 comments total) 1 user marked this as a favorite
This is definitely one of my favorite movies. It really does feel like a heist, and despite knowing that he's still alive, talking to the camera about a certainly successful walk, I feel the tension in the attempt and the joy he felt in completing it. You really do understand the totalizing nature of his obsession, and why others get drawn in. Plus I loved seeing how much he prepared and the amount of effort to make sure it's a success. A lot of times I'd feel you'd only scratch the surface of that preparation, but getting to see it helps assuage me that it isn't just a lark, and that he knows what he's doing. I was curious about the funding for all those New York trips, it's never talked about, but I would have appreciated some insight into if this was self-funded or what.

The end result though is so beautiful, it really does look like he's walking on nothing at all from some angles. I can't imagine seeing this in person, but am happy to experience what I can even from the vantage point of almost 50 years distance.
posted by Carillon at 1:09 PM on July 12, 2022

It's been a long time since I've seen this but I really enjoyed it. The reveal of where the movie title comes from at the end was great and I still think about it often.
posted by Sibrax at 4:59 PM on July 12, 2022 [1 favorite]

I adore this movie. You would never have persuaded me before watching it that wirewalking could move me almost to tears--but there you are!
posted by praemunire at 5:03 PM on July 12, 2022 [1 favorite]

Yes it was very emotional and beautiful for me as well.. even the poster photo is breathtaking.
posted by latkes at 4:27 PM on July 16, 2022 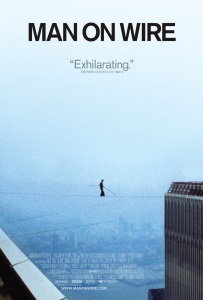