In this documentary, filmmaker Penelope Spheeris captures the life of Los Angeles "gutter punks": homeless teenagers who prefer anarchy and chaos to organized society. Many of the film's subjects come from abusive households and have developed alcohol and drug problems. While living on the streets, they must panhandle, squat in abandoned apartment buildings, and fight off skinheads to survive. The film also includes performances by several notable Los Angeles punk bands.

From Wikipedia: Since September 9, 1998, Spheeris has been in a relationship with a man known as Sin, whom she met while filming the documentary. In a 2015 interview, she revealed that he was in an institution in Florida after he stopped taking his medication (he has schizophrenia and bipolar disorder) and ended up in jail. She has described him as the love of her life.

This Mubi.com article goes into more detail on the changes in Spheeris's life sinceshe made this film.

The film premiered at the 1998 Sundance Film Festival where it won the Freedom of Expression Award. It was screened at the Cannes Film Festival and the Chicago Underground Film Festival, where it received a jury award. However, it never went into general release and was not available on VHS or DVD until the release in 2015 of a box set containing all three films on DVD and Blu-Ray. This was partly due to Spheeris refusing to relinquish the rights to the first two parts of the trilogy in order to enable the third to be released. According to an article by Laura Snapes for Pitchfork, "there was little demand to see such a depressing movie, and the few distribution offers that Spheeris got required her to hand over the rights to the first two movies, which she refused to do." Decline III was eventually released separately via streaming video.

Currently streaming in the US on Kanopy, Fandor, Fubo, and Night Flight, or with ads via Crackle, Tubi, Pluto TV, VRV, Vudu, or The Roku Channel.
posted by DirtyOldTown (3 comments total)
To my eyes, these films form a perfect trilogy. In each, kids define themselves through music even as they struggle to define their place relative to society/"the system." The punks in Part I want to blow up the system. The hair metal kids in Part II want to cash in on it. The gutter punks in Part III want to leave it behind.
posted by DirtyOldTown at 10:41 AM on July 18, 2022 [2 favorites]

This used to be fairly inaccessible; I have a VHS copy because around 2006 I emailed Penelope Spheeris to ask if it was going to be released and she offered to send me one. 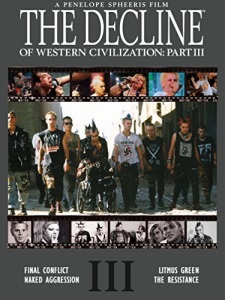