Unlucky assassin Ladybug is determined to do his job peacefully after one too many gigs gone off the rails. Fate, however, may have other plans, as Ladybug's latest mission puts him on a collision course with lethal adversaries from around the globe--all with connected, yet conflicting, objectives--on the world's fastest train.


There is nothing like watching Tarantino-lite to make you appreciate the actual skill Tarantino brings to his films (amidst all the nonsense). All the actors are more or less fine (though Michael Shannon is no David Carradine), the premise is functional, the fights are okay, the script has almost no zip at all. There is one genuinely funny cameo.
posted by praemunire (16 comments total) 2 users marked this as a favorite
What with all the reschedulings, it's been a bad couple years for seeing trailers waaaaaaaaaaaay too many times. Do you know how many times I gave Maverick the finger over the past year and a half?
posted by praemunire at 9:03 PM on August 2 [1 favorite]

While waiting for the movie's release I read the book - it was certainly entertaining but seemed to be very much a case of trap your hero in a tree then throw rocks at him until eventually a divine force rescues him. That divine force in this case is amazingly fortuitous character history and placement along a Shinkansen line.

I'll watch it and probably enjoy it, but doubt I'll recommend it.
posted by Molesome at 1:10 AM on August 3 [1 favorite]

I will say: if you want to understand what "star power" is, watch Pitt in this film. No matter how loopy the action, no matter how cringe-inducing the running gag he's stuck in gets (it only lands about 1/3 of the time), no matter that he's dressed like "every white homeless dude I've ever seen," you never doubt that the camera should be following him.
posted by praemunire at 12:32 PM on August 3 [4 favorites]

If like me you're not good with faces the cameos are explained here.

Channing Tatum (to me: "that guy who looks familiar") is the passenger who puts on Ladybug's hat and glasses.

Ryan Reynolds is the assassin Carver whose place Ladybug takes. I never noticed him at all.

I thought the movie was fine. Decent action/comedy with the silliness you'd expect from the trailers. Not a classic but I had a good couple of hours watching it.
posted by TheophileEscargot at 2:25 AM on August 5

Enjoyed the book, enjoyed the movie!
posted by exceptinsects at 3:27 PM on August 7

This is a huge, knowingly preposterous, hilarious action movie. It belongs on a shelf with Con Air, if that helps people calibrate.
posted by DirtyOldTown at 6:27 PM on August 9 [3 favorites]

I don't know, man, some of the banter is just so leaden. The Thomas stuff actually has a decent payoff but the taxiing around to get it off the ground...I've seen this movie a couple times now because I need to get out of the house and I can watch the nearby reserved-seating theater for late-night shows that are sparsely populated, and I just want to rescue Bryan Tyree Henry from those stretches.

I am sad to report there is no overnight bullet train from Tokyo to Kyoto, in considerable part because the bullet train trip between them only takes 2+ hours. Also, the train car design is quite different (a pity, to me the actual design looks cheesy). However, there is this beauty of a train on the island of Kyushu.
posted by praemunire at 10:23 AM on August 10 [1 favorite]

Bullet Train exceeded my expections - - departure's a bit iffy, but it gets better and better as it careens towards its destination.
posted by fairmettle at 12:18 AM on August 14

Saw it for $3 today at Cinemark and it was worth all three of those dollars. This kind of action flick seems pretty stale and tired in 2022 and that banter between hit-men was fresh in 1994 but not so much now. On the other hand Pitt really is one of the last movie stars and carries most of the film on his charm.
posted by octothorpe at 5:10 PM on September 3

On rewatching, I did appreciate how Hiroyuki Sanada is just about the only one who actually manages to be cool.
posted by praemunire at 6:41 PM on September 3

got around to seeing this yesterday and I expected it to be pretty bad and dumb but holy moly now I viscerally understand the idea of "NASA has new employees watch Armageddon and list all the scientific inaccuracies they can find," like, wow, whoever wrote this movie literally does not understand that there is a difference between trains and airplanes, huh

like I laughed out loud, hard, a lot of times during this movie, but never at jokes — the handwritten note early on looks like it was written by a child or a beginning learner of Japanese, though maybe that's intentionally the case given that the character who wrote it is foreign?

Overall it felt like it was made by people who love the work of Quentin Tarantino but also have absolutely zero understanding of why his stuff works, so you get lots of flashy text overlays and slow talky scenes but without the understanding that the talky scenes need to have dialogue that is good. Maybe in an homage to Snowpiercer they decided to try to make the dialogue all feel like English-language dialogue written by Bong Joon Ho.

I did appreciate the way that the sun rises over the course of a 2½-hour train ride, as a fitting metaphor for just how long this movie felt. It's a shame that the last 20 minutes or so is pretty fun (if in a really stupid way) because the movie took so long to get there. They easily could have 100% excised the whole Wolf subplot and lost nothing of value, and gotten there sooner. So I guess it's kind of like Armageddon in that sense, too.

Brad Pitt did a decent job of playing Owen Wilson playing The Dude from Big Lebowski, at least. The action scenes generally felt more Three Stooges than John Wick in their execution. Also somehow the movie takes place in some sort of post-apocalyptic Japan that does not actually have any people living in it. So I guess it's kind of like Snowpiercer in that sense.

It definitely feels like there's fertile ground for a drinking game bingo card based on vaguely racist Japan stereotypes, though I'm conflicted whether to put "someone says 'honorable,'" "wacky Japanese toilets amirite" (two separate scenes!), or "wacky Japanese mascots amirite" in the center space. One thing is certain: you absolutely have to drink a shot whenever someone screams NOOOOO in slow motion.

Anyway I thought it was extremely bad but on the cusp of Good Bad Movie. Definitely gave it a strong recommendation to a friend who also lives in Japan, who enjoys hatewatching bad movies. It was a weird double feature with Three Thousand Years of Longing, because that movie was mostly engaging in the moment (for its first half at least) and then sort of gradually sat worse and worse with me, particularly after finishing it, whereas this one was dumb as hell from minute one but I enjoyed gawking in disbelief at just how dumb and bad it was. Like, there was literally no reason for it to be set in Japan? It had less of a grounded sense of place than Springfield in The Simpsons
posted by DoctorFedora at 5:59 PM on October 2 [2 favorites]

like at one point in the fight scene at the non-shrine that inexplicably had a weird extra-thiccc torii in front of it, we just sort of started singing "Always" by Erasure because it was just sort of a reenactment of the music video
posted by DoctorFedora at 6:00 PM on October 2

Hah, I'd totally forgotten that I'd even seen this movie until this thread popped back into my recent activity a few minutes ago.
posted by octothorpe at 8:14 PM on October 2

Like, there was literally no reason for it to be set in Japan? It had less of a grounded sense of place than Springfield in The Simpsons

I believe the (Japanese) author of the novel on which it's based said he wasn't sure his characters needed to be Japanese in an adaptation, because he wasn't even sure they were human. It's that kind of book/film.

I could be wrong, but I don't think anyone ever actually said "honorable" (unless it was in untranslated Japanese, which I wouldn't have recognized)?
posted by praemunire at 10:39 AM on October 3

It was near the end in a flashback or something, in English. I remember because as soon as I heard it my immediate reaction was to just shout “bingo!”
posted by DoctorFedora at 4:30 PM on October 3

The fights are pretty fun, and a catharsis from the rest of the movie. This movie is trying very hard. Most of the jokes don't fall but enough of them do to make it still watchable. TBF I was very much in the mood for something dumb.

Pitt and Bullock have no chemistry. The kid from Kick-Ass did a really good job as Tangerine; I didn't recognize him during the movie but at one point I did notice his long otter body.
posted by fleacircus at 10:43 PM on October 25 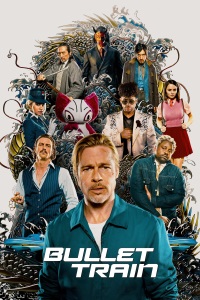