Nathan travels to LA to train actors for his show


Nathan makes a number of sensible and reasonable choices in this episode:

-Training his background actors to inhabit the lives of random people, since background actor quality and commitment is a weak point of the rehearsals
-Creating an accurate reenactment of the training -- including a stand in for himself -- so he could relive the training from the perspective of a trainee
-Moving one of the trainees out of their own apartment, living in that trainee's apartment, then living in a recreated set of where he made that trainee move
-He encourages the 15 year old actor playing his son to hate him, then regrets it and reverts the rehearsal back to 6 years old
-Nathan and Angela seem to be getting along

I think all of us, including Nathan, learned something new about both parenting and acting in this episode.
posted by Hume (11 comments total) 3 users marked this as a favorite
I enjoyed this episode, and seeing the list of things that happened in this post, it was really a lot of stuff. At the same time, it was a pretty chill episode. Mostly it revolved around Nathan's matryoshka doll setups, so it was kind of mechanical. There were some cute moments with the participants, but there were no wild revelations (aside from the totally weird-ass way someone checks if their spaghetti is done, possibly stemming from their history of drug use). I guess the whole acting school thing shows how he sets things up so he can build a solid episode, even if the setup doesn't cause any lightning in a bottle WTF moments.
posted by snofoam at 3:01 PM on August 6, 2022 [1 favorite]

although this wasn't as incredible as the Robin episode, which is already in my list of all time great television shows, it was still amazing. The cascading levels of indirection in the actors hired to play actors playing other people, and Nathan playing one of those actors while an actor playing Nathan reenacts Nathan to Nathan?? A stroke of genius. The overdose had me dying with laughter, and the final scene, when the kid goes down the slide and the 6 year old comes out??? I can't say enough about how incredible this show is.
posted by dis_integration at 6:24 PM on August 6, 2022

Yeah, this is amazing stuff.

Josh/Adam did a helluva job in what must have been a tricky acting environment. I teased my son (14) that Josh was going to be his competition for the school play this year. “Josh is going to eat your lunch if you’re not fully committed!”
posted by Don.Kinsayder at 7:29 PM on August 6, 2022 [1 favorite]

ok, I have to ask…how squirm-inducing is this show? Like, the British Office just about gives me hives, by way of calibration.

It sounds fascinating, but I’m not sure I have the fortitude these days.
posted by hototogisu at 12:55 AM on August 7, 2022

Out of 1-10 it is about a 15 in squirm inducing. It is a different squirm inducing than The Office, a kind of haunting awkwardness. Like this episode everyone is getting paid, they're actors, they have agency in the outcome yet he still somehow makes it painfully awkward. Someone described it as Brechtian and that's pretty much dead-on. There's a high art aspect of this, it reminds me sort of like the passage from Delillo's White Noise where there's people taking pictures of the barn that no one can see.

possibly stemming from their history of drug use

I dunno I've done acid and blow, and I throw spaghetti at the wall to see if sticks like a normal person. Though Angela seems like the type of person who would make their drug use define their life instead of something they tried and forgot about.
posted by geoff. at 1:32 AM on August 7, 2022 [4 favorites]

It took me 4 episodes to finally remember the name of the book, but is anyone else getting a Tom McCarthy "The Remainder" vibe from The Rehearsal?
posted by whuppy at 8:02 AM on August 7, 2022 [1 favorite]

Whoa, whoa, whoa! Don’t we just pluck out a strand and bite it to tell when it’s reaching toothsome-ness?

Yeah, about a 15 on the squirm scale. I watch about half of each episode facing away from the TV.

My favorite bit this episode was the shot of the extra/actress just plugging away at random keys on the Cane’s register.
posted by Don.Kinsayder at 8:47 AM on August 7, 2022 [4 favorites]

It took me 4 episodes to finally remember the name of the book, but is anyone else getting a Tom McCarthy "The Remainder" vibe from The Rehearsal?

Thank you for the title! I described this book to my girlfriend while watching last episode but was also struggling to remember the name.
posted by kaisemic at 9:08 AM on August 7, 2022 [2 favorites]

Glad to see love for Remainder here. I will definitely give this a go.
posted by hototogisu at 12:09 AM on August 8, 2022

The cascading levels of indirection in the actors hired to play actors playing other people, and Nathan playing one of those actors while an actor playing Nathan reenacts Nathan to Nathan??

A big part of the squirm factor for me is that the stuff Nathan is doing often shades into the unethical. Like taking the actor’s keys so he can surreptitiously live in his apartment.

I feel bad for Angela- her weird religiosity is keeping her from finding someone to make a life with. Her personal narrative isn’t that compelling to me — I too did those drugs as a young person and now I’m a godless partnered person who doesn’t do any drugs mostly because I’m busy.
posted by jeoc at 1:23 PM on August 9, 2022 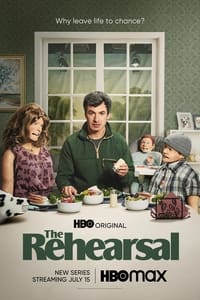