Australian good girl Sandy (Olivia Newton-John) and greaser Danny (John Travolta) fell in love over the summer. But when they unexpectedly discover they're now in the same high school, will they be able to rekindle their romance despite their eccentric friends? Grease was successful both critically and commercially, becoming the highest-grossing musical film ever at the time.

Directed by Randall Kleiser. Screenplay by Bronte Woodward, based on the 1971 musical of the same name by Jim Jacobs and Warren

Currently streaming in the US on Freeform, Paramount Plus, Sling, and DirecTV, and for digital rental on multiple outlets. JustWatch listing.
posted by DirtyOldTown (13 comments total) 3 users marked this as a favorite
Although I doubt anyone hated this movie more than I do, I'll miss Olivia Newton-John.

As a kid when this came out, I was always confused by how old the cast was. Even now, I don't think I look as old as those "teenagers" did then.
posted by The corpse in the library at 3:38 PM on August 8, 2022 [6 favorites]

Although I doubt anyone hated this movie more than I do...

I hate this film for many many reasons, and I've watched it for many many reasons, such as:
1) the cartoon title sequence is just completely wrong for the tone of the film; it's like a late-70's stoner/kid cartoon (the animation is that bad) I keep expecting to see Fat Albert or Scooby Doo. Hate the song.
2) You gotta become a hot slut if you want to recapture or keep your child man. Ugh.
3) Racist classist uggghhhh extra scoops of sexist crap all around
But...
Stockard Channing is fabulous and I don't care if she's a 30 year old teenager in lust. Travolta was terrific, all lanky pouty greasy posturing. I love the Pink Ladies, I love the fumbling bumbling trying to become a grownup.
Those stacked curler hair towers. All of the damn songs that work pretty damn well in context, and stay in my damn head forever.
Lots of location shots around LA, including the river bed (of course, if you're gonna have a drag race sequence you gotta shoot at the river bed) and the graduation fair at Marshall High, with the hills of my home in the background.
The fabulous cameos by Eve Arden and so many others. Many of these actors, at the time this film was released, had been working in tv for a long time, so getting to see them really do something was exhilarating.
Finally, this was one of the best/worst paeans to 50's nostalgia, and I was just so sick of "how great it used to be" in 1978. Gimme the Clash anyday.
That being said, it's addictive, and "Look at me I'm Sandra D" is one of the best bitchy songs ever. That and explaining why you have a slightly nasty nickname...with an explanation that isn't quite right, because you're too dumb to know. Perfect.
posted by winesong at 8:55 AM on August 9, 2022 [8 favorites]

Ages of "teens" at time of filming:

You gotta become a hot slut if you want to recapture or keep your child man. Ugh.

I totally get that critique, and I'm not really arguing it, but I feel it often gets forgotten that meanwhile the previously anti-jock, anti-nerd Danny joins the track team and earns a school letter in an attempt to be more normy to impress her. So both of them get out of their comfort zones. Hers is the more visually impressive transformation, and the movie pays it more attention, though arguably his took more time cuz he would've had to be on the team for months.

But anyway, it's also true that neither of them should've really had to go through all that to be together.
posted by dnash at 11:48 AM on August 9, 2022 [5 favorites]

I was surprised when I read this article some years ago, to find out that Grease originated in the Chicago off-loop theatre scene, and that originally it was a lot rougher and not the cleaned up cartoonish thing it became:

“The Pink Ladies were the toughest broads I’ve ever seen, before or since,” says Jacobs, now 68. He remembers them stowing razor blades in their teased hair, in case girls from another gang attacked them, and carrying church key can openers, not just to pop a Hamm’s but to use for protection.

The original Grease was appropriately raw. In his rave review for the Chicago Tribune, William Leonard called the characters “a bunch of foul-mouthed, lazy, brawling, useless, cheating, disrespectful no-goods” and warned the show was “for those who don’t mind dirty four-letter words and lots of them.”

But when it left Chicago for Broadway, Jacobs says, he and Casey were pressured to clean up the racy lyrics and write new ones for general audiences. In the car-sex anthem “Greased Lightning,” for example, a lyric that originally read “the chicks will cream” became “the chicks will scream,” and the line “You really are a clown if you think that I’ll go down in greased lightning” got cut altogether. Jacobs and Casey dumped the Chicago references, too. By the time the sun-soaked California film version came along in 1978, Grease was squeaky clean enough for Olivia Newton-John to star.
posted by dnash at 12:04 PM on August 9, 2022 [4 favorites]

RIP Olivia Newton-John, but for me this movie (and the play it's based on) is all about Rizzo. She's the most interesting and most real character in the film. Stockard Channing's performance is absolutely incredible. Rizzo is in a completely different movie than everyone else - a much darker one, and Channing sells it perfectly without her storyline being too incongruous with the teenage shenanigans around her.

I may be a bit biased because I have played Rizzo in a stage production of Grease (the play is better than the movie btw), but anyone who plays Rizzo at this point is just nipping at Channing's heels trying to feel their way into her tortured, heartbroken, broken soul the way she did. God, I love her.
posted by nayantara at 4:30 PM on August 9, 2022 [8 favorites]

"Chicks will cream" was in the movie.

For Chanukah that year I was given a cardboard coloring poster and I made principal McGee's hair green.

Eugene gets a pie in the face...with the recent news about Eddie Deezen I wonder if this was unscripted and provoked.
posted by brujita at 9:02 PM on August 9, 2022 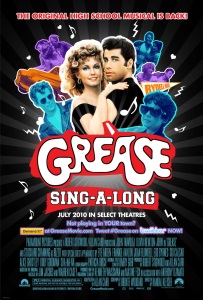