Rae Ingram (a barely out of her teens Nicole Kidman) and her husband, John (Sam Neill), struggle to overcome the sudden death of their young son. In an attempt to move past their loss, the couple take their yacht out for an extended vacation trip. While far out at sea, they come across a sinking schooner and rescue the ship's sole survivor, Hughie Warriner (Billy Zane). Hughie claims the crew of the ship died from food poisoning. Though Rae is empathetic towards Hughie, John is suspicious of his story.

Orson Welles had previously attempted to make a film based on the same source material (a novel by Charles Williams) but ran out of funding, and lead actor Lawrence Harvey died before the production was able to resume.

Currently streaming in the US on Kanopy and available for digital rental on multiple outlets. JustWatch listing.
posted by DirtyOldTown (7 comments total) 1 user marked this as a favorite
"Dead Calm" was an early favorite that I had in my personal collection. I am a big Sam Neill fan. I love Nicole Kidman. And this is one of Billy Zane's best performances. And and and, it all takes place in the tranquil waters of the South Pacific on a beautiful yacht! Plus, Sam Neill in uniform, he wears it so well. Anyway, a fun story about survival. I like how the plot splits up. Sam Neill's character is a man of action and must deal with physical challenges. Nicole Kidman's character must overcome past trauma and match wits with Billy Zane's character. A good story with well-acted characters. I think it's time for a rewatch.
posted by Stuka at 3:34 PM on August 10 [3 favorites]

It's a gut wrenching film, and it's definitely not for everyone. It switches effortlessly between thriller and horror, but there are some very disturbing scenes in this movie.
posted by Beholder at 9:47 PM on August 10

Oh, maybe a rewatch wasn't the best idea. I got as far as Billy Zane's character showing up and I had to stop. "Why did they let him on the boat?" Back when I was younger, I wouldn't have thought twice about it. But now that I'm older and more thoughtful about the movies that I watch, I realize "Dead Calm" is a movie that I will never be able to "unsee" again. But gosh, Sam Neill sure looked great in his RAN uniform!
posted by Stuka at 6:41 PM on August 11

I watched this again. Still good.

Man, Billy Zane was everywhere for like five years and then he just kind of disappeared. I wonder what happened to him. I'm off to Wikipedia now.
posted by Literaryhero at 6:32 AM on August 13

Man, Billy Zane was everywhere for like five years and then he just kind of disappeared. I wonder what happened to him. I'm off to Wikipedia now.

What the Hell Happened to Billy Zane?
posted by Stuka at 7:15 PM on August 18 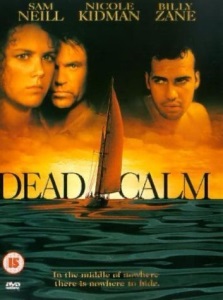