A fleet of Martian spacecraft surrounds the world's major cities and all of humanity waits to see if the extraterrestrial visitors have, as they claim, "come in peace." U.S. President James Dale receives assurance from science professor Donald Kessler that the Martians' mission is a friendly one. But when a peaceful exchange ends in the total annihilation of the U.S. Congress, military men call for a full-scale nuclear retaliation.

56% fresh on Rotten Tomatoes.
posted by DirtyOldTown (11 comments total) 4 users marked this as a favorite
I’m not surprised by the middling RT rating. It really doesn’t hold up well to repeated viewings.
posted by Thorzdad at 7:29 PM on August 11

Previously on the blue, the original trading cards ditto. Yeah, it's kind of a mish-mash of the trading cards, obvious tributes (This Island Earth), the Night of a Thousand Stars stunt cameos, and Burton's usual quirkarama. I mentioned in one of the previous threads that it would work as a satire of Independence Day, but that movie came out only about half a year before.
posted by Halloween Jack at 7:57 PM on August 11 [1 favorite]

I am reminded of Pauline Karl's line about Star Wars: "It's a box of Cracker Jacks that is all prizes." It's delight after delight, but here's no sustenance to it. To that end, I think it's a super fun watch. But it can also serve as a demarcation point for where Burton stopped trying to tell stories and became content to be fussy with style.
posted by DirtyOldTown at 8:12 PM on August 11 [4 favorites]

I like this movie a great deal more, now, than I did when it came out. Why? Because it's cheese all the way up/down, it's got loads of familiar faces leaning in to the cheese-- diving into the cheese--- I like the aliens and their triumphant downfall. It's that last gasp of Tim B being playful and silly. Although I'm always sad about Byron, hopefully on the next viewing he makes it home to Pam and the kids.
Also I love this film, when it came out, because I got to see Tom Jones live at a Warner sponsored event, and He Was Fabulous.
posted by winesong at 8:42 PM on August 11 [7 favorites]

The thing I remember most fondly about this movie is the number of truly huge name stars who end up dead within the first 20 or so minutes. It's a lot of fun.
posted by simonw at 10:15 PM on August 11 [5 favorites]

Honestly love this movie. A re-watch in hotel rooms every time.
posted by Lawn Beaver at 8:14 AM on August 12 [1 favorite]

Saw this in a preview double-bill with The Frighteners. Half the audience were kids under 10. WTF were they thinking?
posted by Jessica Savitch's Coke Spoon at 12:22 PM on August 12

Speaking of celebrities with the same name it took me the longest time to realize this film's 'Martian Girl' was not Elvis's daughter.
posted by Rash at 4:12 PM on August 12

I know it doesn't really hold up without the nostalgia factor, but this is one of my favorite of the Burton movies. It's so unabashedly campy and silly, I just love it so much. I saw it twice in the theater, and have watched it many times since. It makes me happy.
posted by gemmy at 8:19 PM on August 12

"I want the people to know that they still have 2 out of 3 branches of the government working for them, and that ain't bad."
posted by Pope Guilty at 9:10 PM on August 12 [6 favorites] 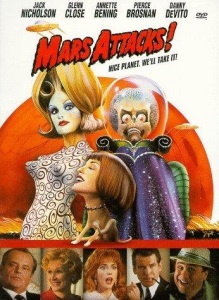