UN's secretary general uses covert operations to help diplomacy along. Shaw's called back 6 months after one such operation. He witnesses the murder of Chinese UN ambassador at UN, NYC, chases the assassin and ends up a suspect.


He is both agent and weapon - a critical line of defense for the Secretary General of the United Nations. He does not even officially exist. Neil Shaw, an American agent who must uncover an international plot to bring down the United Nations on the eve of an historic summit with China. A mysterious chain of events leads to the murder of the Chinese U.N. Ambassador. When Shaw is accused of the crime, he must go underground -- in effect, vanish from his own life.

Andrew O'Hehir: OK, so nobody's going to remember "The Art of War" as a classic of modern cinema. It's what you might call a grade-B blockbuster: one star, a little-known director and a moderate budget, cautiously spent on making Montreal locations look like Manhattan.

Still, amid the end-of-summer trash being swept out the studio doors, "The Art of War" (yes, another tiresome reference to the proto-management text by Sun Tzu) comes off as a delirious, high-energy action fantasy with plenty of wit and style. It chokes on its serpentine plot twists in the end, like a boa constrictor swallowing its own tail. But for action-adventure fans who feel a little underserved this summer, it should make Labor Day more tolerable.

French Canadian director Christian Duguay does not display an original idea in the entire film, but he's a slick synthesist who melds various styles effectively and sustains a mood of deepening paranoia. (His earlier films have included a nifty little thriller called "The Assignment" as well as "Screamers," an intriguing horror/sci-fi combo.) "The Art of War" is part James Bond adventure -- and Wesley Snipes looks smashing in that tuxedo -- part Hong Kong-style action blowout and part deep-cover espionage in the philosophical potboiler vein of John le Carri.

Throw in some generic post-"Blade Runner" rain-soaked cinematography, some slo-mo explosions in the "Terminator" mode (appropriately enough, Duguay is slated to direct "Terminator 3") and, hell, you've got a movie better than most I've seen in the past three months.

Ross Anthony: Careful disciplined direction watches over this piece from it's purposely restrained opening action sequence through the thunderous middle to a slightly less thunderous ending. Not flawless, but I liked it!

In a discussion after the flick, a less-than-satisfied viewer pointed out many imperfections and implausibilities. His criticisms were solid, but apparently I bought into the film, glossed over eyes and all, because I had a great time enjoying the slick (bigger than real) action, quiet brooding Snipes and unfolding twists on the big screen.

Wesley is a man of little words, he walks softly and carries a big stick ... and jumps 30 feet to the concrete way too often for a normal set of legs. But if you don't mind that kind of action, you'll have fun. I did.

You might also appreciate the lack of silly action-tough-guy talk, though there is just a shade too much contrived "hostage attitude" dialogue for my liking. But the film's biggest problems lie in the third act: a "Batman" style "I did it this way because" speech by top villain to the benevolent captive seems way too foolish for a film that does a decent job of trying to be smart, and aside from action-liberties, avoids insults to the intelligence.

David Nusair: Though The Art of War ultimately comes off as a fairly generic thriller, the film - anchored by Wesley Snipes' charismatic performance and several unexpectedly enthralling action sequences - does manage to hold one's interest through the course of its admittedly overlong running time. Snipes plays Neil Shaw, a covert operative who finds himself caught up in a wide-reaching conspiracy involving a dead ambassador and a complex trade agreement between the United States and China. Screenwriters Wayne Beach and Simon Barry have infused The Art of War with a storyline that's often absurdly complicated, as the pair place a continuing emphasis on the political maneuverings of the various supporting characters (including Donald Sutherland's Douglas Thomas and Anne Archer's Eleanor Hooks).

Trailer
posted by Carillon (1 comment total)
I really like the movie, it is one I watched a lot when I was younger, and having come back to it it still holds up for me. I think the big thing is Snipes. He's great in every scene and just improves the movie. I admit I never really found it that hard to follow, and did care about the plot. A lot of reviews talk about how it's so convoluted etc etc, but that's never been my experience with it.
posted by Carillon at 1:53 PM on August 13 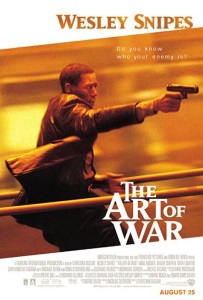