A secretary (Mary Moore) is found dead in a White House bathroom during an international crisis, and Detective Harlan Regis (Wesley Snipes) is in charge of the investigation. Despite resistance from the Secret Service, Regis partners with agent Nina Chance (Diane Lane). As political tensions rise, they learn that the crime could be part of an elaborate cover-up. Framed as traitors, the pair, plus Regis' partner (Dennis Miller), break into the White House in order to expose the true culprit.

Roger Ebert: While our heroes sharpshooter are wading through the dangerous subterranean waters, let's step back and think. They need to tell the president something. He is walled off by a conspiracy. How can they get the information to him? I can think of two answers: (1) The president's son has a personal motive for wanting his father to get the information, and has complete access to him. (2) The cop is surrounded by TV cameras every time he steps outside. He could simply blurt out the truth, since there is no need to keep it secret.

Neither of these alternatives would be as much fun as breaking into the White House, but they would have a better chance of success.

Russell Smith: His Detective Harlan Regis is a no-sweat, Type-B guy who spends his off hours building miniature historical dioramas. Lane, as a WASPish, uptight Secret Service agent who grudgingly assists him, meshes agreeably with Snipes' charming, freewheeling Regis. She's pretty slick at the action stuff too, handling it with a confident, credible athleticism that places her just below Geena Davis' The Long Kiss Goodnight character in the cinematic “bad mama” pantheon. Benzali and Alda play the President's security chief and top advisor, respectively. Both are apparent stock figures whose characters and roles mutate interestingly as the story develops. Still, let's not get carried away by our gratitude at receiving Wonder Bread when we expected moldy cheese. Director Little, who previously has helmed mostly cheap horror and action knockoffs, reaches a new career plateau here, though mostly by imitating the styles of successful action hacks like Michael Bay and Tony Scott. The story, serviceable though it is, still shatters like eggshells under even the lightest scrutiny, and the dialogue is often stale beyond belief. (“The presidency is an institution, not a person!”) But if you can just shift your mind a couple of months ahead into lowered-expectations summer movie mode, you'll have a fine old time with Murder at 1600.

Rob Blackwelder: For the first hour of "Murder at 1600," the new Wesley Snipes picture about a sex killing at the White House, I was engrossed.

Despite some misgivings regarding enormous loopholes in the plot, the mystery was complex and interesting, if a bit heavy on cliches.

The opening credits play over a nameless pretty young thing having sex in the Oval Office with a faceless man. When she turns up dead in a White House men's room, the president's staff is teeming with whodunit possibilities.

Trailer
posted by Carillon (1 comment total)
I remembered this mainly for the civil war diorama in Snipes' apartment, went back and rewatched and there's a lot there to like, but tbh it never really comes together. The best parts involve Lane and Snipes and their banter/chemistry, and I do enjoy the eviction/demolition plot point. But the critics are right it isn't great.
posted by Carillon at 12:43 AM on August 14 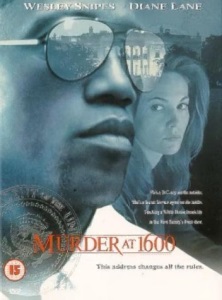