Marty Malt (Judd Nelson) is an unhappy garbage man who moonlights as an atrociously unfunny standup comic. He lives in a dark, grimy, garbage-strewn urban netherworld, where a company named Blump's apparently owns everything. His best friend and fellow trash collector, Gus (Bill Paxton), who accompanies him on accordion, eggs him on. When the "comedian" grows a third arm out of his back, the friend uses this twist to get him signed up with a sleazy talent agent (Wayne Newton), and it begins to look like his career is on the move.

Available streaming vis just one option in the US, streaming free with ads on Tubi. JustWatch listing.
posted by DirtyOldTown (17 comments total) 3 users marked this as a favorite
You didn't think everything I posted was going to be a beloved classic did you?

Everything about this movie is icky and wrongheaded and off-putting. Please understand that if I am "recommending" it in any way, it is in the way that a person says, "Holy shit, this milk is seriously spoiled. You've got to smell it!"
posted by DirtyOldTown at 7:09 AM on August 14, 2022 [5 favorites]

Judd Nelson's performances were the worst thing about The Breakfast Club and St. Elmo's Fire, and I've always wondered if this movie somehow made something remotely watchable out of his hamfisted declaiming.
posted by Halloween Jack at 7:53 AM on August 14, 2022 [2 favorites]

I saw part, but not all, of this movie on very late night TV one night and my memory of it has the queasy quality of a half-remembered but fully disturbing dream. On the one hand I’ve been wanting to watch it for real in the decades since, but on the other hand I’ve been afraid it wouldn’t measure up to the memory, but on the other hand I’m taking its appearance here as a sign to finally watch it (see what I did there).
posted by ejs at 8:10 AM on August 14, 2022 [1 favorite]

He's playing a creep with unwarranted confidence in hi abilities who unnerves everyone around him with his awkward inability to deal like normal people speak.

I remember this well because Film Threat covered it pretty closely. I never saw it, though.
posted by Ivan Fyodorovich at 9:55 AM on August 14, 2022 [1 favorite]

It's unnerving how much 90's Wayne Newton playing sleazeball camp feels like contemporary Bruce Campbell doing the same.
posted by DirtyOldTown at 10:06 AM on August 14, 2022 [1 favorite]

I want to watch this just because of the Shakespeare reference, which seems totally out of place and unrelated to anything about the plot.
posted by Saxon Kane at 11:10 AM on August 14, 2022

Judd Nelson's performances were the worst thing about The Breakfast Club and St. Elmo's Fire, and I've always wondered if this movie somehow made something remotely watchable out of his hamfisted declaiming.

You may find another movie he did early on may fit this style better - Fandango, which was about a bunch of guys who were roommates at the University of Texas class of '71, and have just graduated and are having one last hurrah before they all scatter to the winds. Judd Nelson plays the prissy ROTC cadet in the crowd. (Kevin Costner plays the Good Time Charlie schmoozer who plans to skip over the border to dodge the draft.)

This, however, is something I have never heard of and may try to track down just because it sounds gloriously and gargantuanly batshit.
posted by EmpressCallipygos at 12:20 PM on August 14, 2022 [2 favorites]

I spent a decade trying to remember the name of this movie after seeing its case at our local Blockbuster in high school, and I’ve been subsequently re-forgetting/re-remembering it every few years since I figured it out. Never got around to watching it, but something about it certainly made an impression on teenage-me.
posted by a box and a stick and a string and a bear at 1:23 PM on August 14, 2022

Had to do VPN shenanigans to watch this (Does not exist in Canada, apparently) and I think I might have loved this if I saw it in the 90's. Not sure how I'll feel about it in the now.

Huh, Adam Rifkin was the writer director of Invisible Maniac, and The Chase, also wrote Mousehunt, and Small Soldiers.
posted by rodlymight at 6:16 PM on August 14, 2022 [1 favorite]

If you liked this (no judgement), you might check out Rifkin's crowd funded film Director's Cut. It's got a similar insanity (though I still think Dark Backwards is the better film).
posted by Ashwagandha at 9:12 PM on August 14, 2022 [3 favorites]

Oh this is my go-to weird movie and I’m so happy it’s here! I have made everyone I know watch it at least once. And Bill Paxton is just the best, he really makes the movie. 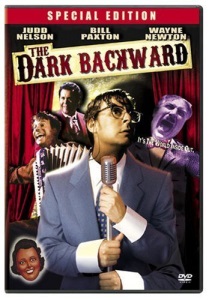