Blade forms an uneasy alliance with the vampire council in order to combat the Reapers, who are feeding on vampires.


Exploding from the pages of Marvel Comics comes the thrilling follow-up to the blockbuster "Blade." Half Man ... half vampire, and consumed by a desire to avenge the curse of his birth and save the human race from a blood-drenched Armageddon. In this newest action-packed adventure, Blade (Wesley Snipes) is forced to team up with the very vampires he hates in order to overcome a new type of monster which threatens to eradicate both races.

Laura Bushell: "Blade II" doesn't have designs on itself as being a revelatory narrative concept. Instead it concentrates on Blade's battle to protect the human race and how he has learnt to accept his dual nature.

He's more mature here and has a pensive capacity, along with the ability to kick ass. Action is punctuated with subtext, sinister imaginings, and sardonic humour throughout, largely due to some skilful direction.

Del Toro employs some of his trademark mood-making here. He infuses the scenes with atmospheric colour - icy blue, warm yellow, and red - and some artful direction, that makes the rest of the film as enjoyable to watch as the action sequences. Well, almost.

Laura Miller: Blade rescues his old mentor Whistler (Kris Kristofferson) from a pack of vampires who've infected him and are keeping him hooked up to blood-dispensing IVs and suspended in a giant vial of serum. One appealing thing about horror movies is the way that their psychosexual undertones are so blatant that they can hardly be called "under" anything; this one is a Freudian playground. Del Toro (whose previous films include the giant cockroach thriller "Mimic," the village gothic "The Devil's Backbone" and the arthouse curio "Chronos") works in the icky-bodily vein, lingering over oozing fluids, gaping wounds that expose weirdly pulsating organs and various nightmarish visions of pregnancy, gestation and birth including, in this particular case, Kristofferson as an oversized, gray-bearded pseudofetus in -- yes -- leather pants.

And so it goes: Lots of jostling for alpha-male supremacy between Blade and Reinhardt; proud displays of gleaming weaponry ("That's a pneumatic syringe delivery system"); tense, stealthy expeditions into the city's sewers; fight scenes on elevated platforms; a smidgen of love interest with the vampire overlord's daughter; set pieces of florid carnage; lines like "You're about one cunt hair away from hillbilly heaven" and the predictable double cross. "Blade II" doesn't have quite as much of the wit that enlivened its predecessor, though two wonderfully disgusting toss-away gags involve the vampire overlord snorting pink cocaine and eating blood Jell-O. A potentially promising scene involving a vat of blood falls flat because the liquid looks much more like Hawaiian Punch.

Still, "Blade II" does have Snipes, whose Easter Island cool comes just shy of crossing the line into camp. His Blade is a man who can't head upstairs for bed without a little flourish of his floor-length leather trench coat. The only downside of watching him stand there, glaring sternly at his opponent of the moment while his arms and sword windmill frenetically all over the place, is that there's a little too much of it. That, and the running up the walls and the flipping over and the flying through the air -- all symptoms of the craze for "Matrix"-style martial arts that will only pass with time. Maybe by the time "Blade III" comes out, the vampires will have reopened their disco in SoHo.

Cynthia Fuchs: Perhaps the most compelling aspect of the Blade movie franchise is its consistently intricate politics. For all the fun of the new film's elaborate fight scenes, stunning cinematography (by Gabriel Beristain) and design (Carol Spier), its most riveting aspect remains Blade. He's so mesmerizingly difficult, so self-divided, as described by the title of Mos Def and Massive Attack's excellent soundtrack contribution, as "I Against I." Blade II re-complicates already complex questions about identity and community, justice and loyalty, again allegorizing race (human and vampire, black and white). Blade's mixed-race status makes him feel alienated, but also special. He keeps fretting himself into a frenzy on a race continuum, sliding between dynamic and charismatic, sinister and galling.

They're also part of a cultural system. As overt and metaphorical as the film's race politics are, they remain complex. With their DNA all messed with, the mutant Reapers have their own claim to victimization, as a race, as well as their genocidal urges, much like half-breed Blade, much like any vampire who's been turned. While vampires are creatures of darkness, quite literally allergic to sunlight, the Blade series recuperates blackness -- in his body and perspective. And that's where the haircut makes so much sense, along with the big guns and sword, the tortured psyche and the comic book hero's mythos. Blade's conflicts are almost too deep and shallow at the same time. Too much time and never enough. Or, as Mos Def puts it, "Spread across time till my time never come."

Trailer
posted by Carillon (9 comments total) 1 user marked this as a favorite
This to me is the weakest of the original three. Ron Perlman though was great, the Reapers effect also was really cool too. As always though the action in the Blade movies is done quite well. In part it was before the whole jitter cam approach pioneered by the Bourne series, so you actually see and get a good sense of what's going on. Even as much as I think this story is silly, I remember the sewer fight scene fondly!
posted by Carillon at 11:28 AM on August 15 [1 favorite]

The best Blade. Probably the best superhero movie.
posted by Literaryhero at 11:28 AM on August 15

This is the best Blade film to me, by a mile.

Genuinely surprised by how slow this feels- the original has a plot that just keeps moving forward as we watch both sides- Frost and his minions and Blade and his allies- working toward the climax and this one feels very much like it takes forever to actually do anything.
posted by Pope Guilty at 1:18 PM on August 15

Also, in case you're like me and had to check, the novel The Strain, which had very similar vampires to the Reaper strain, came out a few years later- though according to this interview, both designs were del Toro working off the same underlying idea he'd wanted to create from for a long time.
posted by Pope Guilty at 1:21 PM on August 15

I love this. I love Danny John-Jules representing the ruling council of the vampire nation. I love Norman Reedus and I love that him out of Bros is so good as patient zero for the reapers. The bloodpack get bumped off a bit too quickly for my liking, especially Donnie Yen, but you can't have everything. No lines as good as "Some motherfuckers are always trying to ice-skate uphill" either.
posted by biffa at 4:15 PM on August 15

I can't actually remember anything from this movie, although Blade and Blade III are clear in my mind. I guess I'll have to watch it again.
posted by porpoise at 5:42 PM on August 15

I need to at least give this a shot; had no idea that del Toro directed. (I gave up on Blade: Trinity; despite Ryan Reynolds, Patton Oswalt et al. (I was interested mostly because of Oswalt's story from the set in his AV Club interview), it just didn't grab me.)
posted by Halloween Jack at 8:47 PM on August 15 [1 favorite]

I haven't seen this for years but I remember it being the most entertaining of the Blade films, riding the line between cheesy and dramatic pretty well. My favorite recollection is the fight scenes where, amongst all the ninja swordplay, they would sneak in a random move from professional wrestling for no reason other than it looks ridiculous and cool.
posted by AndrewStephens at 7:00 AM on August 16 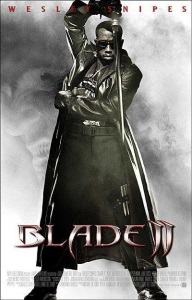