A police officer is brought out of suspended animation in prison to pursue an old ultra-violent nemesis who is loose in a non-violent future society.


With innocent victims caught in the crossfire in Los Angeles' intensifying war on crime, both cop John Spartan (Sylvester Stallone) and violent thug Simon Phoenix (Wesley Snipes) are sentenced to a state of frozen incarceration known as "CryoPrison." When Spartan is finally thawed 36 years later, it's 2032, and Los Angeles is now a pacifist utopia called San Angeles. But with Phoenix again on the loose, Spartan must team up with future cop Lenina (Sandra Bullock) to apprehend the killer.

Phillipa Bloom: Snipes and Stallone clearly had a blast, and you can't help but share the joke: from the 20th Century memorabilia collected by 21st Century cop Sandra Bullock (including a poster for Lethal Weapon 3), to in-references like the Schwarzenegger Presidential Library ("Don't tell me," groans Stallone, "I don't want to know"). Snipes gets to quote Scarface and Sly sends himself up something rotten. The techno-gadgetry is just brilliant, and there's even sort of a message in here somewhere ("Hurting people is not a good thing," chides our Sly, "well, sometimes it is").

First-time director Brambilla delivers the ultraviolence with spectacular comic book results and the panache of a pro, managing from a running start to build­up the mind-boggling action into a climactic special effects frenzy so stupendous as to freeze any criticism in its tracks. If ever there was a movie equivalent to the one-night stand this is it — not necessarily something you'll remember next day but fast, furious and damn good fun while it lasts.

Vincent Canby: Los Angeles is now a megalopolis called San Angeles, ruled by a fascist guru who has created an Eden that, we are supposed to believe, is what might happen if today's health fanatics and antipollution lobbies get their way. There are laws against smoking, drinking, sexual contact and even firearms in this society. Mr. Stallone, looking both more muscular and younger than he did in his "Rambo" era, and Mr. Snipes, who sports a peroxide coiffure, go after each other amid lots of explosions, shootouts and fire effects.

There's an Arnold Schwarzenegger joke and a running gag about the ways in which Mr. Stallone's 2032 girlfriend (Sandra Bullock) never gets 1993 vulgarisms quite right. Nigel Hawthorne, the celebrated English actor, plays the nasty guru much in the lordly manner that Ralph Richardson once used in similar endeavors. The movie is the first feature by Marco Brambilla, an Italian-born, Canadian-bred director who made his name in commercials, which shows.

As in all of Mr. Stallone's films, there is a political message in "Demolition Man." Behind its sendup of today's do-gooders, there's a plaintive longing to return to the good old days of the Reagan era, when government regulators kept quiet and red-blooded American men could exchange body fluids with the women of their choice without being hectored by public health nuts.

Hal Hinson: Basically, "Demolition Man" is a futuristic cop picture with slightly more imagination and wit than the typical example of the slash-and-burn genre. Spartan's colleagues in law enforcement aren't really cops as we know them because, well, there isn't any crime. And so when a crook like Phoenix shows up and starts killing people, they can't deal with him, prompting them to look for help from the last man who put this peroxide-blond urban destroyer behind bars.

Spartan is thawed out to face off with his old adversary. Once he arrives in this clean and proper future, the film becomes a series of so-so jokes about his inability to adapt to this strange new world where people have sex by wearing specially designed helmets and cars drive themselves. Some of these wrinkles are sassy and original, like the morality police who keep up a steady stream of fines as the combatants from the primitive 20th century keep filling the air with swear words. Others, like a gag about the "three shells" that citizens of the future use instead of toilet paper, are crude and cheap.

Stallone tosses every line away with an ironic shrug, not taking himself or any of the nonsense seriously. And Snipes wisely follows suit, though at a markedly higher, crazier level of energy. He's like a Bond villain, cackling madly to himself in appreciation of his own delicious badness.

Trailer
posted by Carillon (15 comments total) 3 users marked this as a favorite
This movie is very much one that I love in spite of the 'libertarian' undertones and message. It works because it leans into it's camp, and I think Snipes and Bullock are a huge part of this. The energy they bring turns what would have been a serious Stallone performance into one of a straight man that buoys the whole thing.

I love the franchise wars jokes/premise, I mean "I will take you to . . . taco bell" is just amazing. The three seashells bit is still one I hear from random people even today. The only negative thing really is that I don't know if they needed the emotional stakes of the beginning, plus his whole thing is that he's a cop who doesn't care about the people he protects . . . which doesn't play well.
posted by Carillon at 12:14 PM on August 17, 2022 [2 favorites]

Oh boy, I adore this movie so much.

So clever. So quotable.

It starts like a 90s action movie, then segues to something even more dystopian.

Snipes still had some passion, Bullock being adorable Bullock, Stallone's done this kind of comedy before and he's game. The supporting cast is also good, with Leary still before his sunset years.
posted by porpoise at 12:24 PM on August 17, 2022 [2 favorites]

Cinema's great unanswered question: did Spartan find out there was no loo roll before or after?
posted by biffa at 12:42 PM on August 17, 2022

In our house, we still randomly announce, “Now every restaurant is Taco Bell!”

We live in a country which has no Taco Bells.
I'm trying to think of localized nightmare equivalents.
'Now every pub is a Wetherspoons!'
posted by bartleby at 2:46 PM on August 17, 2022 [3 favorites]

When releasing it for foreign audiences, every restaurant became Pizza Hut.
posted by Hatashran at 4:04 PM on August 17, 2022 [3 favorites]

So clever. So quotable.

The screenplay is by Daniel Waters.

There's probably a trope name for this, when the current time catches up with "in the year ____" and of course real life is nothing like it.
posted by Halloween Jack at 9:06 PM on August 17, 2022 [2 favorites]

Simon says: This movie is awesome.

I admit, I'm a sucker for action movies with a one-liner every minute and barely enough plot to hang the whole thing together.

Fun fact about this movie: In the European version they changed the restaurant from Taco Bell to Pizza Hut. Very crudely, with 1993 technology. So there's a Pizza Hut logo obviously superimposed on a bunch of shots (mostly in the sequence where the rebels raid the fancy Taco Bell).

For a ‘crude and cheap’ joke, the three shells have fucking legs.

You definitely can, if you have lights that can be controlled by a smart hub in the first place - just set a custom vocal command. It'll still have to be preceded by 'alexa' or 'computer' or whatever your wake word is, however.
posted by FatherDagon at 6:35 PM on August 19, 2022 [1 favorite] 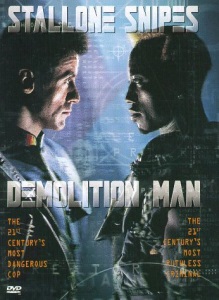