After orchestrating a brilliant escape from an Estonian psychiatric facility, Esther travels to America by impersonating the missing daughter of a wealthy family. An unexpected twist pits her against a mother (Julia Stiles) who will protect her family from the murderous "child" at any cost. Improbably, the role of Esther, played in the original by 10 year-old Isabelle Fuhrman is once again played by Fuhrman in the prequel, this time as a 25 year-old using forced perspective, oversized props, body doubles, etc.

64% fresh on Rotten Tomatoes, with a surprising number of reviewers saying that this film's embrace of camp is actually an improvement on the original.

Now playing in theaters. (As is so often the case in 2022, the film "opens" tomorrow, but has showing starting tonight. I don't get that, either.)
posted by DirtyOldTown (10 comments total) 1 user marked this as a favorite
We're going to see this bonkers-ass movie tonight and I cannot wait to report back.
posted by DirtyOldTown at 7:33 AM on August 18, 2022 [1 favorite]

Obviously I am not going to see this one but I saw an interview with Isabelle Fuhrman (she's DELIGHTFUL) and Julia Stiles (she's... yep, Julia Stiles!) and I'm eager to hear what actually happens in this thing, so please spare no details!
posted by mochapickle at 8:40 AM on August 18, 2022

This was... super fun? If the first movie was attempting to scare despite its camp, this one knows it has camp and leans right into it. It's not giggly, silly camp. It's audacious can't-believe-they-did-this camp. And it's very satisfying.

Is this preposterous? Yep. Can you absolutely tell they're using tricks to hide an adult woman in the role of a child-sized person? Yep! Is this "elevated horror"? Heavens, no! Did smart people write and produce this movie to give people who like the Esther character 100-ish minutes of thrills and kills? Yep! And they did good.

Quick pause... Normally, I don't give a shit about spoilers here because FF is for discussing the film after you've seen it, and people who come by without having seen it know the risk they take. but this is right near the top of the page for a movie that just came out, so I'll warn you...

I'M GOING TO SPOIL THE SHIT OUT OF BOTH THE ORIGINAL AND THIS ONE.

So the first one was a serviceable to kinda good Evil Kid movie with one bonkers twist: it wasn't a kid. It was a dwarf conwoman who had escaped from an Estonian asylum. She was played by a ten year-old, but still: the character Esther/Leena was a grown ass woman.

So you may be asking: how do they pull off having Fuhrman return as an adult to the role in a prequel without having it be comical? Two answers. Three, really, but let's start with two. One, since we already know she's really an adult, many, many more shots/scenes are behind the curtain of her scam. So it doesn't matter if she looks a little grown up there. But how do they make her a little kid? NO CGI! Forced perspective, people on blocks/boxes/in boots (according to articles I have read) and extensive body doubles. Seriously, if Esther is seen from above the waist, in movement, or next to a person or object that would give her size away, she is doubled and it's framed carefully to avoid her face but make it feel natural. Several times, it's easy to pick up on, but it's never so bad it's distracting.

It should be funny, but because a) it's done about as well as can be done and b) we are meant to find this a little funny/campy this time and c) we are, from the get-go in on the joke that "Esther" is no child, it's fine.

Okay, what was that third factor? A TWIST. A delicious, delicious twist, that we only get about halfway through the movie and I did not even sniff this one coming. Two thirds of Esther's "family" knows from the jump that she isn't the real Esther, magically returned home. How do they know? Because they killed her. Well, specifically, the rich asshole sociopath son killed her and his mom covered it up. So it doesn't matter if she looks convincing in front of them, because they know she's lying anyway. But they a) can't exactly say that and b) don't want to break the dopey dad's heart, since he was a broken man when his little girl "disappeared."

And man, this twist is fun. This woman and her son aren't victims. They're the worst. And when they start gunning for Esther, it basically makes our girl the antihero. It's a fun feeling I haven't really had with a horror sequel. not since the late 80's when Jason and his ilk got so popular, the movies would kind of let you root for them. This movie flat out lets you root for Esther, at least in the second half.

Lots of fun to be had here, from the origin of Esther's ribbons, to her "dad" teaching her the hidden blacklight layer in paintings trick, to her "mom" impatiently coaching her on how to better impersonate a little girl.

This was a piffle of a movie, with nothing particularly deep or thoughtful to say thematically. The twentysomething-as-a-little-kid thing is right there and no one will blame you if you just laugh.

The reviews at RT have ticked up to 70% fresh.

DirtyOldTown, your review/recap was a delight! Thank you so much!
posted by mochapickle at 7:29 AM on August 19, 2022 [2 favorites]

I'm going to have to do a survey of some of the reviews to establish that I'm not losing my mind...

The movie is equal parts clever and trashy, made for people who like to see very good actors play people who are very bad. - Noel Murray, Los Angeles Times

There’s a twist in this movie that’s every bit as bonkers as the one that came before it, one that could have sent the film spinning off into silliness­—and maybe even does, a little—but is so remarkably entertaining that it just works. - Sonny Bunch, The Bulwark

"First Kill" heads down a very familiar highway before taking a huge turn off the exit toward Crazy Town, and it makes for an engaging ride thanks to a committed performance by Stiles... - Adam Graham, Detroit News

First Kill is game, it has come to play, and in Fuhrman it has one hell of a main stage player to savor... the knowing smirk that she brings to the table here, all in body and soul, is endless enjoyment -Jason Adams, The Film Experience

A guilty pleasure from the first scene to the last and should eventually become a cult classic. - Randy Myers, San Jose Mercury News

While still a lurid sequel to a ropey slasher movie, Orphan: First Kill is refreshingly clever, unpredictable and gruesome. Isabelle Fuhrman’s Esther deserves three more sequels and a ‘Versus’ movie with the Stepfather or Chucky. - Kim Newman, Empire Magazine

William Brent Bell has managed to create a camp masterpiece that feels like the sillier side of Orphan’s austere and cold film...it certainly is the most surprising and fantastic surprise of the year so far. - Terry Mesnard, Gayly Dreadful

This film seems to understand its own absurdity much better than the first, and rightly so - Lena Wilson, TheWrap

First Kill is a smart, tight film that fits perfectly into what the first Orphan film set up over a decade ago. - Alyse Wax, Collider
posted by DirtyOldTown at 8:08 AM on August 19, 2022

Even if it isn't an indie, serious A24 type horror film. Julia Stiles is perfect and the pacing was great. A few times I was made too aware of the forced perspective between Isabelle Fuhrman and Julia Stiles but I'm glad they didn't rely too heavily on special effects.

There's an underlying theme that Esther/Leena is very sexual, the obvious thing is to make it more like Let The Right One In and have her be a child prostitute who takes advantage of her johns. Despite the attempts to make Isabelle Fuhrman look like a child she does, at this point, have the bone structure and face of an attractive 25 year old. It would be worth exploring before they throw the next up and coming starlet into the role as this seems to be going into The Omen territory as far as how many movies they might be able to get out of it.
posted by geoff. at 7:23 AM on August 20, 2022

I have a bad case of Prestige Horror fatigue. I thought the recent "elevated horror" film Resurrection was a boring, laughably pretentious piece of crap.

Julia Stiles's performance is 100% high camp and it's magnificent. Like if Faye Dunaway did Flowers in the Attic.

But how do they make her a little kid? NO CGI! Forced perspective, people on blocks/boxes/in boots (according to articles I have read) and extensive body doubles

The most delightfully clever example was a shot of Julia and Esther going down an escalator together. It was shot from the waist up so you couldn't see their feet, because obviously the Orphan actress was standing one or two steps below Julia, but it read onscreen like an adult and child standing side-by-side. So simple and yet so effective!
posted by Atom Eyes at 9:57 AM on September 12, 2022

I was going to watch El Topo this weekend, but on a lark, I watched this again instead. No regrets.

This fucking owns. Very seriously unserious fun.
posted by DirtyOldTown at 9:54 AM on December 19, 2022 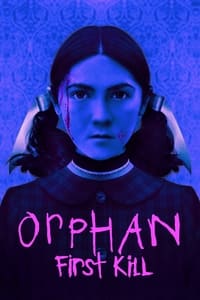