Director Baz Luhrmann's anachronistic musical is a celebration of love and creative inspiration set in the infamous, gaudy and glamorous Parisian nightclub, at the cusp of the 20th century. A young poet (Ewan McGregor), who is plunged into the heady world of Moulin Rouge, begins a passionate affair with the club's most notorious and beautiful star (Nicole Kidman).

Directed by Baz Luhrmann. Written by Luhrmann and Craig Pearce.

Currently streaming in the US on Starz and available for digital rental on multiple outlets.
posted by DirtyOldTown (16 comments total) 2 users marked this as a favorite
Experiencing the insanely propulsive opening 20 minutes of this movie on the big screen was such a treat. I vividly remember my giddy glee at the overwhelming visuals, the cleverness of the musical choices, and the feeling that I was seeing something fresh, fun, immersive, and absolutely dazzling. Even after that first onslaught, there are so many wonderful performances and so much eye candy throughout! Here we are now, ENTERTAIN US.
posted by merriment at 9:22 AM on August 19, 2022 [7 favorites]

Experiencing the insanely propulsive opening 20 minutes of this movie on the big screen was such a treat.

Opening night, Ziegfeld Theater, NYC. The 20-minute opening was too bright, too chaotic, too much for some of the audience and a good 50 people got up and walked out.

I still don't get it. I spent the rest of the movie enraptured. The music is the second best part but I've played it at home as a silent movie and it's weirdly just as gorgeous that way.
posted by mochapickle at 10:54 AM on August 19, 2022 [3 favorites]

Mochapickle: I don't think I was there on opening night, but I definitely saw it at a packed Ziegfeld Theatre, which is exactly the way to see this movie. I will never not love this.
posted by Navelgazer at 11:02 AM on August 19, 2022 [1 favorite]

Oooh, maybe you were there! Let's see, it was packed to the gills, it was super hot outside. But the thing I remember most clearly is the opening frames where the conductor is doing the overture, and people unfamiliar with the dark velvety theater interior slowly started to realize it was the movie and not an actual conductor and everyone started to laugh.
posted by mochapickle at 11:17 AM on August 19, 2022 [1 favorite]

I kind of liked it, but god damn is it exhausting. It's kind of like being stuck inside a theater kid's head during a manic episode.
posted by Ursula Hitler at 1:43 PM on August 19, 2022 [12 favorites]

Ursula totally walked out of the Ziegfeld Theater.
posted by mochapickle at 2:10 PM on August 19, 2022

I did say I kind of liked it. The visuals were impressive and there was plenty to admire, but it's kind of assaultive with its too-muchness. Just yatta-yatta-yatta, in your face.
posted by Ursula Hitler at 2:35 PM on August 19, 2022 [3 favorites]

It's a trainwreck. Trainwrecks are almost never dull.
posted by Jessica Savitch's Coke Spoon at 4:27 PM on August 19, 2022 [1 favorite]

By the end of the movie Mrs. Fedora and I were jokingly finishing the guy’s sentences with a spoken-word “it’s a little bit funny, this feeling inside…” whenever possible

I will say, though, it was generally either good enough to be good or bad enough to be memorable, and there are worse things to be
posted by DoctorFedora at 11:03 PM on August 19, 2022 [2 favorites]

It's kind of like being stuck inside a theater kid's head during a manic episode.

The metaphor one reviewer used was that it was like being stuck in a freight elevator with an entire circus troupe.
posted by ricochet biscuit at 3:42 AM on August 20, 2022 [1 favorite]

I once heard someone describe ska music as “what plays in a thirteen-year-old boy’s head when he gets extra mozzarella sticks”, and this movie has always seemed like what that same kid vamps when he read the Cliff’s Notes very thoroughly but never cracked the actual book.
posted by Etrigan at 7:17 AM on August 20, 2022 [1 favorite]

The musical numbers (except Like A Virgin, which I agree is THE CREEPIEST, along with the "NOBODY! TOUCHES! MY! THINGS!!!!!") are very good. It is a pretty circus. But the plot is pretty bad/creepy/ridiculous, especially the handling of being "dying" yet still able to do a lot of sex and complicated dance numbers.
posted by jenfullmoon at 5:37 AM on August 21, 2022 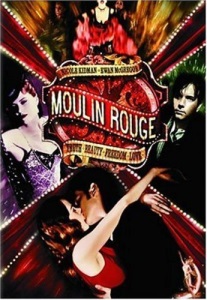