FLASH! AH-AH! He's the hero of the universe! A campy big-budget space opera from 1980, with music by Queen.


Although NASA scientists are claiming the unexpected eclipse and strange "hot hail" are nothing to worry about, Dr. Hans Zarkov (Topol) knows better, and takes football star Flash Gordon (Sam Jones) and travel agent Dale Arden (Melody Anderson) with him into space to rectify things. They land on planet Mongo, where the despot Ming the Merciless (Max von Sydow) is attacking Earth out of pure boredom. With the help of a race of Hawkmen, Flash and the gang struggle to save their home planet.

82% fresh on on Rotten Tomatoes.

Also it still makes.me giggle that Chaim Topol features so heavily in two of my favourite *exceedingly different films* Flash Gordon and Fiddler On The Roof!
posted by Faintdreams at 11:57 AM on August 19, 2022 [4 favorites]

I love this big, dumb, campy movie, not least because of BRIAN BLESSED!*, who has personality enough for this and two other movies at once.

How did they manage to assemble such an excellent cast, yet fumble so badly with the leads?
posted by cheshyre at 2:17 PM on August 19, 2022 [1 favorite]

I love this big, dumb, campy movie, not least because of BRIAN BLESSED!*, who has personality enough for this and two other movies at once.

Some years ago BRIAN BLESSED was guest-hosting the news comedy panel show Have I Got News For You. I recall he was reading off his card a blurb about a news story that could have been fatal to Gordon Brown’s stint as PM, but Brown escaped the worst of it. At one point, he stopped, peered at the camera, and bellowed “GORDON IS ALIVE!!!” and returned to the story without further comment.
posted by ricochet biscuit at 3:09 PM on August 19, 2022 [18 favorites]

This movie is basically perfect for so many reasons. The retro-ey space-ships, the incredible score, Sydow OWNING the character, and so many other things. Yes, yes, clunky Sam Jones, but we'll let it slide.
posted by davidmsc at 3:42 PM on August 19, 2022 [2 favorites]

At one point, he stopped, peered at the camera, and bellowed “GORDON IS ALIVE!!!” and returned to the story without further comment.

The costumes alone are bazonkers amazing.
posted by bitterkitten at 6:51 PM on August 19, 2022 [3 favorites]

Ah, yes. One of my favorite movies that I never don't watch. And one of the first handful of tapes that I had back then (IIRC the other side was Krokus) made for me by my school friend.

So awesome in so many ways. Definitely on my list of "OMG you haven't seen Flash Gordon, we're going to watch Flash Gordon" sort of movies. The soundtrack pops up in my head quite often.
posted by zengargoyle at 5:00 AM on August 20, 2022 [2 favorites]

I remember seeing this movie in the theater with my dad and loving BRIAN BLESSED!
posted by miss-lapin at 8:19 AM on August 20, 2022 [1 favorite]

If you want to see someone really pushing at the outer limits of their range, watch BRIAN BLESSED doing his thing as the hawk-guy, and then watch him in Branagh's Henry V as Exeter in the King of France's court.

This is good cheese, not the extra-fancy kind but just a big damn hunk of pepper jack. Sam Jones is OK, but he's in it mostly as beefcake; one of my favorite bits in the movie was when they remind you that he was a football player on Earth with this scene.
posted by Halloween Jack at 11:34 AM on August 20, 2022 [3 favorites]

I saw this in the theatre in 1980. We all thought it was better than Star Wars and we all couldn't wait for a sequel. But now? I'm glad there isn't a sequel. I think it is a perfect gem of Italian excess, British bombastic acting and American goofy sincerity. Are there people who hate this movie? Everyone I've shown this to thinks it is a masterpiece so if they exist I can only assume they have no joy in their hearts.

I strongly encourage fans of this film to check out Life After Flash which is half an interesting documentary. Half of the documentary follows Sam J. Jones' post Flash Gordon career which was a rollercoaster but pretty typical for someone without the ability to deal with the sudden fame & success (sex, drugs, and bad choices then Christianity) which has some moments but overall isn't as interesting as the other half which focuses on the other actors (no Timothy Dalton obviously but BRIAN BLESSED) & contributors and their heartfelt relationship with the film. Even Peter Wyngarde (who plays the masked Klytus) is interviewed before his death in 2018.
posted by Ashwagandha at 10:01 AM on August 21, 2022 [1 favorite]

Everyone loves Brian Blessed in this movie. My secret favorite character and actor from this, though, is Klytus as played by Peter Wyngarde.
posted by infinitewindow at 11:31 AM on August 21, 2022 [1 favorite]

Peter Wyngarde, generally, is an unsung superstar. Deserving so much more attention then he got.
posted by Ashwagandha at 1:27 PM on August 21, 2022 [1 favorite]

The film is surprisingly true to the old comic strip, including the kinky stuff. As Harvey Kurtzman once said, "That thing was dripping with sex and none of it was normal."

Peter Wyngarde was a fascinating character. He put out an album that's one of the stranger things you'll ever hear. Here's Hippie and the Skinhead, a song guaranteed to make you feel all upset and unclean. The whole album is like that. It's shocking and sly in a super campy, queeny way, but you can never tell what the hell he's getting at really. What are we to make of this story of a girl(?) dressed as a boy who gets beaten up by skinheads and then ends up apparently dating one of them? Or, Jesus Christ, Rape. (Trigger warning for... everything.) Just, what? How? Why?

I'm kind of surprised we made it this deep in the thread without anybody mentioning Sam Jones reprising the role of Flash Gordon in Ted. It's... sure a thing that happened.
posted by Ursula Hitler at 2:25 PM on August 21, 2022 [3 favorites]

This film is indeed beloved by a lot of people - including me! - but it ain't universally loved - for obvious, valid, reasons.

I wouldn't proclaim my love for it to any of my friends with any Asian ancestry for instance..
posted by Faintdreams at 8:50 AM on August 22, 2022

I knew I worked in a great IT department, when during a crisis I told the team to "Stop all engines, prepare to repel boarders" and a staff member shouted "DIIIIIIVE."


I absolutely loved this movie as a kid, and listened to the soundtrack almost every day. After doing something great at work I've definitely at "He saved with a might hand every man every woman every child in the land!!!!"
posted by Abehammerb Lincoln at 11:59 AM on August 22, 2022 [2 favorites]

I knew I worked in a great IT department, when during a crisis I told the team to "Stop all engines, prepare to repel boarders" and a staff member shouted "DIIIIIIVE."

Anyway, the ways it sorts out, I watched the 1936 serial before the 1980 film, and I think it really helped to appreciate the 1980 film's aesthetic, from the sets, props, and costumes, to Jack Lipson's King Vultan, which definitely influenced Brian Blessed's portrayal.
posted by mikelieman at 6:49 PM on November 6, 2022 [1 favorite] 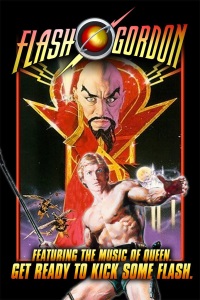