Blade, now a wanted man by the FBI, must join forces with the Nightstalkers to face his most challenging enemy yet: Dracula.


The war between humans and vampires continues, but the humans' best hope, human-vampire hybrid warrior Blade (Wesley Snipes), has been framed for countless murders, turning popular sentiment against him. The vampire leader responsible for Blade's bad publicity is Danica Talos (Parker Posey), who's determined to finally lead her bloodthirsty compatriots to victory. Now Blade must team up with a band of rogue vampire hunters (Ryan Reynolds, Jessica Biel) to save humanity.

Peter Hartlaub: There's a feeling after watching the third "Blade" movie that the filmmakers had a long brainstorming session before production started and then decided -- what the hell? -- to just include everything.

FBI agents show up in "Blade: Trinity" along with a Rodney King-style media circus subplot, a band of human vampire hunters and a new gang of bloodsuckers as well. And then, after half the cast of "A Mighty Wind" and Eric Bogosian wind their way into the story, the movie turns into a Dracula picture, with a 21st century update of the demon prince called Drake.

The decision to move Goyer into the director's seat was a good one, even if his action scenes lean more toward an episode of "Walker: Texas Ranger" than the high-wire martial arts movie work that fans may be expecting. While "Blade" was heavy on blue-hued techno-rave imagery and "Blade II" was a horror film that seemed to take place mostly in sewers, "Blade: Trinity" features more daylight than both films combined and is refreshingly free of love interests for its main characters.

Michelle Alexandria: The first Blade was a fun, fighting good time, while the second one took itself way too seriously and failed miserably. Director/Writer David Goyer learned from his mistake and turned the 3rd outing into a campy affair, which, as long as you are able to shut your mind off and take it for the shlock that it’s supposed to be you’ll have a blast at the theater.

Sure you can complain about the horrible acting, the incredibly lame plot, but wait there is Abigail Whistler (Jessica Biel) spending five minutes of screen time making a music mix on her iPod. I mean like they said, you can’t go into a battle if your tunes aren’t correct.

Nick Schager: Blade: Trinity saddles the heroic daywalker with two vampire-hunting cubs (Reynolds’s Hannibal and Jessica Biel’s Abigail, the daughter of Kris Kristofferson’s gearhead Whistler) and their presence regularly pushes Blade to the story’s periphery. Yet since Reynolds’s incessantly sarcastic Hannibal is the film’s only entity with a pulse—and given that Snipes’s trademark stoicism seems more like boredom—it’s easy to overlook the fact that these new characters’ inclusion is likely just a test-run for their forthcoming spin-off adventure.

Less forgivable is Parker Posey’s vampiress (whose most notable character traits are her abundant eye shadow and stilettos) and Purcell’s Dracula, both of whom encumber the film with a full-throated campiness that diffuses any stabs at suspense. Meanwhile, the director’s shameless plugging of the iPod as the ideal way to enjoy trip-hop while slaying bloodsuckers is just plain embarrassing. That Goyer then decides to pepper this pulpy diversion with a schizophrenic political subtext—Blade refers to the current president with an expletive and uses biological warfare to defeat his undead enemies, while the resting place for Dracula’s centuries-long hibernation is identified (I kid you not) as Iraq—only further solidifies the impression that it’s time to drive a stake into this franchise’s withered heart.

Trailer
posted by Carillon (9 comments total) 1 user marked this as a favorite
Definitely my favorite of the series, and I think that's in part because I was a teenager when it came out and Ryan Reynolds made me laugh a lot in this movie. The others took themselves so serious at the time, which looking back isn't bad, but wasn't what I was looking for then. That said I went to rewatch it and it definitely isn't as solid as the others in terms of action and construction of fight scenes. Blade is supposed to be one of a kind, not just part of a team with other humans, shooting arrows around corners is pretty dumb, and the plot makes no sense. I still have a lot of affection for it and would probably rewatch it soon than the others, but yeah I can see why it has the low tomato score that it does.

Plus this is I think the weakest Snipes performance of the three, action scenes excluded. He's always a bit growly and monotone, but this is definitely amped more than the others, and comes off a bit flater. I think maybe it's because he has to act around others who are onside and bouncier, whereas if he's just dealing with enemies it doesn't come across as poorly.
posted by Carillon at 3:44 PM on August 20, 2022

The most impressive part is pulling the movie off with such an apathetic Snipes.

That arcblade bow still makes brain zaps in me whenever I see a a cordless bandsaw.
posted by porpoise at 6:41 PM on August 20, 2022

Probably not complete without Patton Oswalt's AV Club interview, which covers B:T among other things. Snipes even felt compelled to deny Oswalt's story, insisting that he'd have gone to jail if he'd tried strangling the director.
posted by Halloween Jack at 9:04 PM on August 20, 2022

I wasn't there of course, but that quote from Snipes is pretty powerful. It definitely plays into who gets called difficult on set and which actors have behavior excused as part of their art.
posted by Carillon at 9:50 PM on August 20, 2022

I've wondered for a while about how the character of Blade gets so marginalised in this movie, considering it had carried two decent movies, and whether Snipes' alleged behaviour was a reaction to the producers going in a different direction. Regardless, this was a huge disappointment. If you are easily bored by Reynolds schtick then there's not much else here. Biel adds nothing.

It's hard to pinpoint exactly where Snipes' career goes South but this film is the fall from the cliff. After this it's Straight to Video for some time to come.
posted by biffa at 2:23 AM on August 21, 2022

Plus this is I think the weakest Snipes performance of the three,

Was this not the one where he sat in his trailer and let people piece together the story from scenes largely shot with stunt performers and body doubles?
posted by ricochet biscuit at 6:03 PM on August 21, 2022

Well Snipes rejects that framing of events explicitly, from Halloween Jack's link above:

“This is part of the challenges that we as African Americans face here in America – these microaggressions. The presumption that one white guy can make a statement and that statement stands as true! Why would people believe his version is true? Because they are predisposed to believing the black guy is always the problem. And all it takes is one person, Mr Oswalt, who I really don’t know. I can barely remember him on the set, but it’s fascinating that his statement alone was enough to make people go: ‘Yeah, you know Snipes has got a problem… I remind you that I was one of the executive producers of the project. I had contractual director approval. I was not just the actor for hire. I had au-thor-i-ty to say, to dictate, to decide. This was a hard concept for a lot of people to wrap their heads around.”
posted by Carillon at 9:02 PM on August 21, 2022 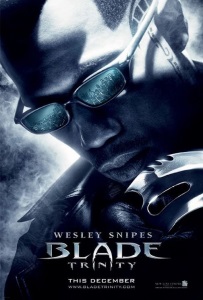