When an escort girl is found dead in the offices of a Japanese company in Los Angeles, detectives Web Smith and John Connor act as liaison between the company's executives and the investigating cop Tom Graham.


When a prostitute is found dead in a Los Angeles skyscraper occupied by a large Japanese corporation, detectives John Conner (Sean Connery) and Web Smith (Wesley Snipes) are called in to investigate. Although Conner has previous experience working in Japan, cultural differences make their progress difficult until a security disc showing the murder turns up. Close scrutiny proves the disc has been doctored, and the detectives realize they're dealing with a cover-up as well.

Vincent Canby: It's a good sequence that effectively introduces the somewhat remodeled, though no less xenophobic remains of Mr. Crichton's wake-up call to America. The novel proclaims its concerns proudly with a simple mind. The film, which Mr. Kaufman adapted with Mr. Crichton and Michael Backes, tries to sound the same alarm, but without giving offense.

It changes the identity of the killer. One of its two principal American characters (both of whom are now morally flawed) has become a black man rather than white, and one of its principal female characters is the product of the union of a black American soldier and a Japanese mother. The movie aims to be demographically balanced.

Yet the onscreen "Rising Sun" remains insufferably smug. It still offends. It directs attention not to the internal reasons for America's economic problems, but to inscrutable, generalized, unknown others from abroad, whose yellow skins and strange manners announce their evil purposes as much as their unfair trade practices.

Angie Errigo: Michael Crichton's best-selling anti-Japanese diatribe has reached the screen under Philip Kaufman's direction softened into a glitzy, high-tech thriller, more to do with sexual deviance than international economic conspiracy, though it still manages to be offensive. More surprising, given its participants, is the fact that it is also transparent and tedious.

The promise inherent in the film's flashy, tensely edited and menacing opening soon dissipates, however, betrayed by sluggish detection and direction. It's all rather tasteless, with a multitude of racial stereotypes and slurs including the "comical" encounter between the helpful, weapon-wielding boyz in Snipes' old hood and a carload of scared-witless Japanese hoods. The "heroes" are scarcely more likeable than the sinister Japanese golf addicts bent on corrupting long-limbed, all-American blondes, Snipes is criminally wasted in a role that never threatens to be interesting, and even the ever reliable Connery fails to stamp his presence on the proceedings. There are brief pleasures, however — Harvey Keitel as a xenophobic detective, Connery barking in Scots-accented Japanese — but they are too few and far between to disguise its malicious dullness.

Richard Schickel: There were, however, a couple of things in the book that were unworthy of thought, even by the modest standards of airplane reads. One of these was Crichton's habit of stopping every 20 pages or so to give a little lecture on the evil genius of Japanese corporate culture. The other was a mystery about an American girl found dead on the boardroom table at a Japanese conglomerate's American headquarters. This plot was more intricate than it had to be because the author was determined to show that there was nothing in American life that the wily Asiatics could not penetrate and corrupt if they set their minds to it -- the Los Angeles police department, of course, but also the U.S. Senate, distinguished universities, even country clubs.

Director Philip Kaufman and Co. have done what they can to lighten this load. The near racist lectures have been trimmed and tightened, and the plot has been twisted so that a Japanese is no longer the murderer. Still, much of the story line must still be tediously pursued, and everybody spends a lot of time sitting around talking about what has happened, is happening or may be about to happen.

Trailer
posted by Carillon (8 comments total)
What a miss of a movie. Rightly called out as super racist, I was shocked while looking for reviews that the original novel was even worse and steeped in even worse hate. I mean I guess not shocked knowing where Crichton ended up, but naively thought that was more of a lot career development and not there from the beginning. Definitely skippable and not great. I didn't even really get on board with Snipes this movie and I've been able to appreciate his acting in a lot of other films, even it they also weren't great.
posted by Carillon at 8:12 PM on August 23, 2022

It is mildly interesting as a historical artifact from the brief post-WWII time when Japan was our number one rival. The racism was in the style of its time--both the directly xenophobic crap, but also exoticizing of their culture. Of course, Connery's character establishes that a white guy can be better at the good parts of being Japanese than they can if he really wants to.

Connery's characterization overall was so obnoxious; definitely getting the flattering star treatment at the expense of the other actors that was common in his later movies. Snipes was more interesting to watch on screen, even given so little to work with.

Crichton also provided a novel for a movie (Disclosure) that dealt with sexual harassment a couple years after Anita Hill--by focusing on the evil woman boss. He'd also dramatize how global warming was a hoax. People seem to have fond memories of Jurassic Park, but the guy was a right wing crank for a long time.
posted by mark k at 12:13 AM on August 24, 2022 [1 favorite]

I am pretty sure I’ve seen this film, but all I remember is there was a dimly-lit scene in a parking garage. Perhaps I edited my memories to remove the racism, and that’s all that was left.
posted by GenjiandProust at 7:10 AM on August 24, 2022

Rising Sun is a movie that at one time I thought stood on its own next to its source material. But over the years, it's slipped. Besides the differences from the book, I don't think the movie is all that well made. It tries to pack too much of the book's plot into its running time and fails. And it's also uneven. There are parts of the movie that seem very unpolished, which stick out from the rest. As for the acting, Connery was Connery. Snipes was ... miscast, simply because I hate the Webb character. The only really stand out performance was from Ray Wise. :D

As for the racism, all I can say is that Rising Sun was my introduction to Japanese culture and history which have fascinated me for the past twenty-five years.
posted by Stuka at 9:52 AM on August 24, 2022

I'm one of the schmucks who saw this in a theatre, because I really liked Cary-Hiroyuki Tagawa a lot and was looking forward to him being in a big movie. I was just...supremely uncomfortable, and the racism/exoticizing was bad enough, but the misogyny was just oozing off the screen. When I left the theatre, even though I was always a matinee showing person because the theatre was less crowded, it felt so gross because the mostly white men who were there were just so excited about the film. I couldn't believe that one of my favorite directors (Kauffman) had made that piece of crap.
posted by kitten kaboodle at 11:47 AM on August 24, 2022 [1 favorite] 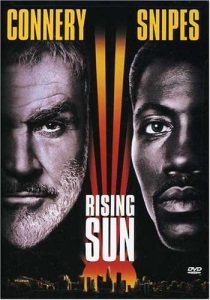