Monsters Incorporated is the largest scare factory in the monster world, and James P. Sullivan (John Goodman) is one of its top scarers. Sullivan is a huge, intimidating monster with blue fur, large purple spots and horns. His scare assistant, best friend and roommate is Mike Wazowski (Billy Crystal), a green, opinionated, feisty little one-eyed monster. Visiting from the human world is Boo (Mary Gibbs), a tiny girl who goes where no human has ever gone before.

Currently streaming in the US on--where else?--Disney Plus. Also available for digital rental. JustWatch listing.
posted by DirtyOldTown (5 comments total) 1 user marked this as a favorite
This is pretty fun, but it's also gentle to the point of toothless. And the sequel was not good.
posted by DirtyOldTown at 11:24 AM on August 26

Gentle except for the part where the bad guy has one of the most horrifyingly evil plans in all of fiction: kidnap children and keep them in constant perpetual terror to feed off their fear.
posted by straight at 6:41 PM on August 26

So, I just finished watching this with my four-and-a-half-year-old granddaughter (who is now running around the place chanting “mike wazowski”). I had forgotten a lot about the movie, so it was a nice way to be re-introduced to it.

Gentle? Certainly. Toothless? Hardly. Especially not to the intended audiences, like my granddaughter. I think it treads quite confidently along that line that really entertains the kids, and has enough stuff for the adults, too. Certainly not extreme stuff, but stuff, especially visually, that entertains if you just let it.

The concept of the factory full of doors still holds up really well, especially the visual gag of stepping through them. Not an original gag, to be sure, but one that’s creatively and effectively adapted here.

The only real nit I have to pick is how the resolution is revealed. We learn very early about the far superior power of a child’s laugh, yet it’s almost totally forgotten throughout the movie. Then, suddenly, the factory is now harvesting laughs, without a single demonstration to everyone else. No “child starts laughing in front of everyone, power goes berserk, and it’s a ‘hold on...this changes everything’ moment. Instead, it’s just, Boo goes home, her door is shredded, Sully mopes, then...it’s a Laugh Floor now. It’s a small nit, but it did hit me as an awkward resolution.

It’s really interesting to watch the older Pixar movies just to judge how far computer animation has come. Monsters Inc. still stands-up pretty well in that aspect, save, perhaps, for the humans. Boo, and the one other human character show that convincing human characters were still a bit out-of-reach at that point in time. Not distractingly so, but there’s still a “not quite there” aspect to Boo and the other boy that stands out from the rest of the animation. But, that was also 21 years ago (!!!)

I recall a great deal being made at the time of the development of the software/computing power/whatevs to convincingly animate Sully’s fur. There are definitely show-off moments where it, still today, impresses.

I’d forgotten Ralph was one of the story writers. Hi!

Didja catch the quick appearance of the Nemo character in Boo’s room? It was the next Pixar feature and certainly in production by that time.

Agree that the prequel/sequel was bad.

That this lost to Shrek for the Oscar is a crime. Monsters Inc. is a far superior film on almost every level, save for the fact that Shrek is a more adult-oriented film, which, I think, helped sway it with the voters. But, gawdalmighty, it’s nowhere near in the same league as MI.

Anyway, sitting on a couch with a four-and-half-year-old really helped get into the right zone to re-watch this movie. I’m very glad I did.
posted by Thorzdad at 7:20 AM on August 28 [3 favorites]

This may well be my favorite Pixar movie; it's just fizzing with creativity. Look for example at the background details: everything subtly ornamented with teeth and horns. The world-building of our cryptids being their rejects.

And yes: the premise is horrific; Randall and Waternoose are planning to torture children. Consider also: was Boo the first child they were going to experiment on, or just the first time they got caught? Waternoose in particular seems very well aware that children aren't actually toxic.

The core of the movie though is Sulley's growing realization that even MI's regular scaring business is exploitative and immoral. "Oh, Randall's your monster"; his absolute horror at witnessing Boo's reaction to the scream simulator. I think the pivot to laugh energy at the end is somewhat earned by this? and it doesn't bother me that this happens off-screen although rationally it doesn't make a lot of sense; why do Mike and Sulley specifically get to take over Waternoose's role?

Also: one of the finest final shots in all cinema. Always reminds me a little of the final shot of The Taking of Pelham 123.

Yeah, they were still very much in the "can't quite render humans convincingly yet so let's do non-human characters that play to our strengths" phase. Putting Boo into the monster costume for a lot of the movie helps to smooth over this a bit
posted by We had a deal, Kyle at 12:04 PM on August 28 [2 favorites]

And the sequel was not good.

Monsters University? My kids have watched it multiple times, and I relate strongly to the themes of talent vs. drive. Plus that closing musical theme is a real banger.
posted by ThePinkSuperhero at 2:46 PM on August 29 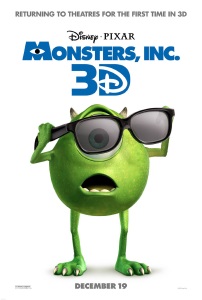