When a millionaire wheeler-dealer enters a business contract with Hollywood hooker Vivian Ward, he loses his heart in the bargain.

Director Garry Marshall considered for the male lead, among others, Al Pacino and Burt Reynolds. Molly Ringwald turned him down, and he declined to pick Winona Ryder. According to an interview in 2009, director Werner Herzog was approached by Richard Gere to direct the film when it was still a dark drama. He politely declined.

The soundtrack included Go West's 'King of Wishful Thinking', Roxette's 'It Must Have Been Love,' and the Red Hot Chili Peppers' 'Show Me Your Soul.'

Julia Roberts was nominated for an Oscar, and won a Golden Globe and a Kid's Choice Award. Pretty Woman was the third highest-grossing movie of 1990 and is considered the #1-grossing romantic comedy of all time.

Currently streaming on Hulu in the US, for rent/sale via Apple TV, Google Play, Youtube, and other places.
posted by box (9 comments total)
Should anyone else immediately run aground on this bit of trivia, yes, Julia Roberts did win a Nickelodeon Kids' Choice Award in 1991 for Pretty Woman, what the actual hell.
posted by merriment at 8:54 AM on August 28, 2022 [9 favorites]

This is a movie where the plotting is bizarre (While You Were Sleeping is another one), but somehow the leads make it work. Julia is just dazzling.
posted by jenfullmoon at 9:04 AM on August 28, 2022 [4 favorites]

Edward Lewis is the definitive suave and sophicated man, IMO. I consider Pretty Woman a companion piece to An Officer and a Gentlemen. In Officer, Richard Gere played raw angst. In Pretty, he played refined angst.
posted by Stuka at 9:54 AM on August 28, 2022 [1 favorite]

As to that Kids' Choice award -- yeah, I was in sixth grade or so at the time, and I remember that every other girl seemed to love it, and it was strange because it didn't seem like something moms hated either. I watched it with a friend and didn't care for it. Even at the time (probably because I had read a bunch of stuff I really should not have), I knew that it couldn't be what a sex worker's life was like. The romance didn't appeal to me either because I don't like male romantic leads who are jerks to women, and those were mostly what you got for a while there. I could probably count the romcoms I do like on one hand.
posted by Countess Elena at 10:28 AM on August 28, 2022 [2 favorites]

Should anyone else immediately run aground on this bit of trivia, yes, Julia Roberts did win a Nickelodeon Kids' Choice Award in 1991 for Pretty Woman, what the actual hell.

So much about my childhood makes sense in the context of a society that would let this happen.
posted by ThePinkSuperhero at 1:54 PM on August 30, 2022 [2 favorites]

This is high on the list of movies with major plot points that simply wouldn't happen anymore. Specifically, Gere stops to ask Roberts for directions. These days, unless his phone were dead and/or the ultra-expensive car he's in doesn't have a working navigation system, he'd never talk to her.

Another movie by Gerry Marshall merits attention: The Flamingo Kid. It shares PW's concerns of class and fatherhood, and is just generally a very sweet and funny film. In fact, I like it better and it has possibly aged better for being set in the early Sixties.
posted by Caxton1476 at 6:54 AM on September 2, 2022

So much about my childhood makes sense in the context of a society that would let this happen.

I'm kind of reminded of how I watched Best Little Whorehouse in Texas as a kid and I really had no clue whatsoever as to what was going on with the sex-for-money plot of it.
posted by jenfullmoon at 11:05 AM on September 2, 2022 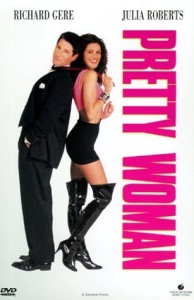