John McClane and a Harlem store owner are targeted by German terrorist Simon in New York City, where he plans to rob the Federal Reserve Building.


Detective John McClane (Bruce Willis) is now divorced, alcoholic and jobless after getting fired for his reckless behavior and bad attitude. He is called back into action, however, when a cryptic terrorist (Jeremy Irons) takes New York City hostage in a lethal game of "Simon Says" and refuses to speak with anyone but McClane. Teaming up with a street-savvy electrician named Zeus Carver (Samuel L. Jackson), McClane dashes through the city, trying to stay one step ahead of a murderous plot.

Caryn James:
The most unfortunate aspect of "Die Hard With a Vengeance" is a drawn-out episode in which Simon announces he has put a bomb in one of New York's hundreds of schools and will set it off if the children are evacuated. Though that part of the film carries obvious, accidental echoes of Oklahoma City, the link to real events is not the problem. Playing cat and mouse with the idea of blowing up children would always have left the nasty aftertaste it does now. That aftertaste may be the strongest indication that while the "Die Hard" franchise is still alive, it has begun to pick up the desperate energy of a series past its peak.

MaryAnn Johanson: Planes, trains, and automobiles. (Okay, they only just mention the plane.) Dump trunks, 18-wheelers, boats, bikes, and helicopters. If action movies are Erector sets, made by a bunch of grown-up boys playing with the biggest and coolest toys imaginable, then this is one of biggest and best toy boxes ever. Director John McTiernan (The 13th Warrior, The Hunt for Red October) — a master of action movies — dumps his toys onto the streets of New York and moves them around with the finesse of someone who knows and loves this city. Some critics complained that Die Hard with a Vengeance doesn’t have the wonderful claustrophobia of, particularly, the first Die Hard, which trapped its characters in a single office building. Those critics have never sat in crosstown traffic. Those critics have never taken 45 minutes to circle a single block. Bumper-to-bumper traffic is claustrophobic, and McTiernan knows it.

In fact, 90 minutes into the movie, you begin to wish he'd start to think about winding things down, but the pace is relentless. The script and direction mercilessly, deliriously, take things too far. Too many amazing things happen. It stops being amazing.

Trailer
posted by Carillon (9 comments total) 2 users marked this as a favorite
Zeus: Why you keep calling me Jesús? I look Puerto Rican to you?
John McClane: Guy back there called you Jesús.
Zeus: He didn't say "Jesús." He said, "Hey, Zeus!" My name is Zeus.
John McClane: Zeus?
Zeus: Yeah, Zeus! As in, father of Apollo? Mt. Olympus? Don't fuck with me or I'll shove a lightning bolt up your ass? Zeus! You got a problem with that?
John McClane: No, I don't have a problem with that.
posted by SPrintF at 5:33 PM on September 19

I definitely like a bunch about this movie, and weird things have stuck with me over the years. McClane in a signboard, the water measuring scene. Jeremy Irons definitely does enough of his own thing that I never found it just a Rickman imitation. The whole badge number/lotto exchange was fun as well. Honestly the thing that doesn't work is the shoehorning in of Holly and making this in any way about their relationship.
posted by Carillon at 9:10 PM on September 19

This movie is definitely a case of 'third installment better than the sequel'. And even possibly, because it depends so little on the original**, a rival to the first one*.

**The only thing you need to know, and the movie clues you in on pretty clearly, is that the Bruce Willis character has been in an Action Movie Scenario before, and it was against the brother of this movie's Baddie. Asking "Ugh, if this is Die Hard 3, do I have to watch the first two to understand/like this?", the answer is No. This can stand on its own.

*I would argue that it's because this film's script benefits from the Ellen Ripley Effect. Know why Sigourney Weaver's character in Alien is such an exemplary action figure?
Because it wasn't written as a female character; the script just calls for RIPLEY with no description. Ripley's just written as a person, not a clumsy collection of Strong Female Protagonist tropes.

This movie wasn't written as Die Hard Franchise Part Three. It was a stand alone action thriller with a working title of Simon Says. The studio decided to take the script, slot in John McClane as the generic cop character, and it would get more attention and make more money as DH:3, Summer Blockbuster

Pitch meeting: "The first one was Trapped in an Office Building. Then we had to go bigger for the second one, so we did Trapped in an Airport. We're going to have to go bigger again if we do a third, so how about Trapped in Manhattan?! Eh? Right?"
posted by bartleby at 9:33 PM on September 19 [2 favorites]

I rewatched this last week because of Rick & Morty leaving me puzzled over that post-credits scene - the sandwich board with "I hate everyone" and after some investigation found out that for TV broadcast the board was changed from what I had always known it as to "I hate everyone". Then the joke made a lot more sense.
posted by Molesome at 11:40 PM on September 19

I actually like this movie more than I do most third entries in film series, but for me the momentum of the thing drops off sharply after all the dump trucks leave the bank with the gold. It feels like someone wrote four acts for a three-act film. I'll still always watch it, though.
posted by Mr. Bad Example at 2:58 AM on September 20 [1 favorite]

For a darker finale, check out the alternate ending. Yippie-kay-yay.
posted by Servo5678 at 7:11 AM on September 20 [2 favorites]

The signboard scene was shot with two signs, one that said "I Hate Everybody" and another one with visual references for the FX team to CGI over the actual offensive message shown in the film.
posted by DirtyOldTown at 7:13 AM on September 20

I watched this not too long ago, and liked it better than I remembered. It's always fun to come across Samuel L. Jackson in his pre-Nick-Fury-typecasting days (his sort of mild-mannered computer guy in Jurassic Park is another one I like).

Some critics complained that Die Hard with a Vengeance doesn’t have the wonderful claustrophobia of, particularly, the first Die Hard, which trapped its characters in a single office building. Those critics have never sat in crosstown traffic. Those critics have never taken 45 minutes to circle a single block. Bumper-to-bumper traffic is claustrophobic, and McTiernan knows it.

I just watched the opening scene, and it really does evoke the heat, the smells, the claustrophobia, the exhaustion, the crowds of being in Manhattan on a hot summer day.
posted by Well I never at 9:50 AM on September 20 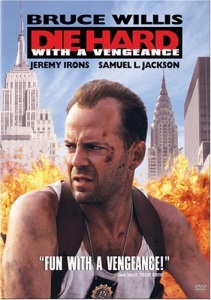