An illusion gone horribly wrong pits two 19th-century magicians, Alfred Borden (Christian Bale) and Rupert Angier (Hugh Jackman), against each other in a bitter battle for supremacy. Terrible consequences loom when the pair escalate their feud, each seeking not just to outwit -- but to destroy -- the other man.

Currently available for digital rental in the US on multiple outlets. JustWatch listing.
posted by DirtyOldTown (12 comments total) 3 users marked this as a favorite
I really like this one. Stylish and just a bit nutso.

As with our discussion in the Sixth Sense thread, this is a film that hinges almost completely on its big reveal. Perhaps not as heavily as SS, but it's still a reveal that kind of subdues repeated viewings. That first time, though, is quite a good gut punch.
posted by Thorzdad at 9:58 AM on September 28, 2022

It took me a long time to like this movie. After I saw it the second time (as noted, The Twist in this one is really good and is absolutely telegraphed throughout), I still didn't like it. So I read the book, which I liked much better because it's in a literally magical world.

But as the years go on, I revisit this every now and then, and it has grown in my estimation. Angier's obsession makes sense to me now. His monstrous actions make sense, if only within the realm of his obsession.

I still wish they'd made a version that adheres closer to the book, but perhaps a streaming series would be a better medium (so to speak).
posted by Etrigan at 10:33 AM on September 28, 2022 [1 favorite]

I agree the book works better. The film didn't quite nail down why the elderly Chinese magician's "fishbowl production" illusion is so important to the story, illustrating the extremes a magician will go to in order to "sell" the illusion.
posted by SPrintF at 10:39 AM on September 28, 2022

One of my favorite movies ever!! Watched it back when it was first released and then rewatched a few times back when Netflix was only doing DVD mailers. It's just so clever and the questions it asks haunted me for a long time. After the Nolan Batman movies it's funny to see Batman and Alfred doing the same damn thing in a whole other life, LOL.

I saw this on an airplane but sadly we landed before I could finish it and I missed the twist. I had to download it a bit later on to watch the ending. It's probably worth a rewatch as I'm sure the tiny screen and sound going through airplane headphones didn't do the film justice.
posted by any portmanteau in a storm at 12:30 PM on September 28, 2022

The Prestige is one of my favorite movies. It seemlessly straddles period, science fiction, and fantasy. I loved the production, how well they recreated Victorian London and the other settings. Like a lot of films, the acting is the movie's strongest point. Christian, Hugh, Michael Caine, all superb. Of course the award for best actor must go to David Bowie, who really became the personification of sophisticated Englishness. Good story and writing too, especially the Tesla character. And then there is Borden's final line, perhaps one of the creepiest moments I've ever experienced in a film, like he knew something that we didn't.
posted by Stuka at 2:38 PM on September 28, 2022 [3 favorites]

I used to love this film. Then my wife died. Now I can't see past Nolan's recurring dead wife trope, which he likes so much that he actually does it twice in this film, the bastard.

Christopher Nolan is a director whose movies either work for me, or they don't. The Prestige isn't perfect, but it works for me. Nolan's Batman trilogy misses the mark. It's not even that he doesn't understand the character, which he doesn't. But even the character he puts on screen is inconsistent, which ruins everything else. And Inception is half-baked. Great concept. But if you're going to do that kind of movie, you either think EVERYTHING through to their logical conclusions and put it all on screen or you don't even try. Like I mentioned in Night of the Comet, that movie doesn't leave anything unanswered because it doesn't ask any questions. Inception leaves a lot of questions unanswered in the dust of the story.
posted by Stuka at 11:50 AM on September 29, 2022 [3 favorites]

I love this movie, so so so much.

Even though I know the twist I don’t tire of watching it, I just love the atmosphere so much. My favorite Nolan movie.
posted by WaterAndPixels at 2:36 PM on September 29, 2022

It’s rewatchable like a good magic trick; even if you know the secret, it’s a pleasure to see it so masterfully performed.
posted by Mister Moofoo at 8:10 PM on October 3, 2022 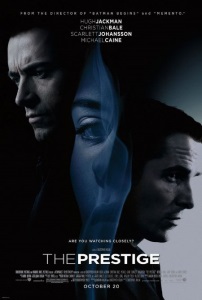