Currently available for digital rental in the US on multiple outlets. JustWatch listing.
posted by DirtyOldTown (2 comments total) 3 users marked this as a favorite
There's a bit of a nostalgic idealized sepia tone to this. But that may be because of what was happening behind the scenes...

John Ford had originally planned to film this on location in Wales, and in color. But right when they were getting ready to head over, that's when the Axis Powers started in with the Battle of Britain, and Ford realized that trying to film something when they were under risk of Luftwaffe fire would probably not be a good idea. So he had to stay in California and made it a black and white film to disguise that fact.

A lot of the people he cast had family and friends back in the UK who were contending with the war, as did some of the crew; some of them had even come to the US because of the war, like Roddy McDowall's own family did. So a lot of them would hang around the set comparing notes and sharing news and commiserating with each other after their shots were done for the day. And filming something that depicted "a more innocent time" was a comfort for them as well - okay, yeah, the Morgans were poor and there was a miner's strike, but it was a close-knit family and they weren't getting strafed and that was a comparative improvement.

So that cast bonded really, really tightly, to the point that they all had annual reunions on the anniversary of the first day of filming for years after.
posted by EmpressCallipygos at 7:42 AM on October 13, 2022 [5 favorites]

It's one of my favorite movies. Nevertheless, it still became a running joke in our family after the Frasier episode where Frasier tries and fails to rent a copy at the local video store. Whenever one of us is furiously looking for something we ought to know isn't there, another one of us will say, "It's across the street in the How Green Was My Valley annex."
posted by The Underpants Monster at 3:39 PM on October 13, 2022 [2 favorites] 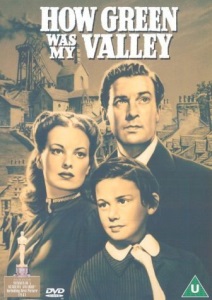