Four years after the events of Halloween in 2018, Laurie (Jamie Lee Curtis) has decided to liberate herself from fear and rage and embrace life. But when a young man is accused of killing a boy he was babysitting, it ignites a cascade of violence and terror that will force Laurie to finally confront the evil she can't control, once and for all.

Now playing in theaters and streaming on Peacock starting tomorrow. JustWatch listing.
posted by DirtyOldTown (7 comments total)
I'm watching it right now and if I wasn't watching it online with other people, I would have stopped watching it a long time ago.
posted by miss-lapin at 11:21 PM on October 14, 2022

I really wanted to like this. But there are roughly 30 seconds of Michael Myers in the first half of the film.

They have gradually drifted from fan service movies that know why people like slashers into yet another attempt at "elevated horror." They take a big swing, trying to get into the cyclical nature of evil. But it really misses the mark for me.

The only part I think is good is the ending, where they absolutely obliterate Michael's body and make sure the whole town sees. Some more forgiving souls than me may get enough good feelings from this to like this movie. But holy fuck, that first half was boring. Even the much livelier second half only takes it from "total disaster" to "disappointment."
posted by DirtyOldTown at 5:19 AM on October 15, 2022 [2 favorites]

I went in with low expectations but even so a lot of the writing was like "What?" Like the argument the young lovers have during their first date was so weird-if they had dated for a few months ok, but the first date? It kind of reminded me of Polyester in that it seems like the timeline was super accelerated, which didn't make any sense in the context of the film. And the whole Corey gets "corrupted by evil" rather than he becomes violent because of the entire community turning against him exactly like how the town turned against someone in the previous movie with fatal results-that there is no examination that there seems to be a serious problem of evil within the community itself that isn't going to go away with the destruction of Myers. I find the town has scarier than Myers and I don't think that was intentional considering the "uplifting ending."

I watched this again.

Thing is, just as this trilogy has done from the beginning, it takes big swings but does not do the work to make them land.

Think back to how in Halloween (2018), generations of an entire town have been haunted by the monumental horror of Michael Myers... except when they retconned out all of the sequels, that leaves Myers having killed like three people, 40 years ago. Why is the town in fear and awe of this man like they'd seen all the sequels? Probably more people got killed at an argument at a Wendy's there the year before.

This movie does more of the same. There are some good sequences and some actually darkly beautiful moments. But they don't back it up. I just don't buy it. I don't believe Laurie become a nebbishy hausfrau within a few years of being the horror Sarah Connor. I don't believe the town obsessing over Corey as a proxy for Michael Myers. I don't believe Corey and Allison immediately becoming a serious couple with huge dramatic fights. I don't buy them trying to dial back Michael from invincible killer with supernatural powers to weakened figure hiding in the sewer. I don't buy Michael absorbing Corey's life story via skin contact and deciding on him as a protege. I'm certainly not okay with Michael being benched for the first half of the movie. Hell, I don't even buy the four band kids as the town's cruelest bullies. (Who hurt you, Danny McBride?)

Some great images, some huge thematic swings, but it isn't constructed well enough for the whole thing to land.

I'd give it points for ambition, which is not something often said for Halloween sequels. And some impressive vibes in places. But it completely fails as an individual film and as a slasher.
posted by DirtyOldTown at 11:40 AM on October 18, 2022 [2 favorites]

I mean, I can at least say that I thought this was better than the last one, but yeah, that was some awful writing. I felt like I was cornered in Danny McBride's dorm room while he wouldn't stop talking about the cyclical nature of evil in between massive bong rips. They even dusted off that Nietzsche quote about the abyss.

I think for some other slasher franchises you could do an interesting "slasher's protege" story (some of the Scream movies went down this road, as I recall). It doesn't make much sense for Halloween, though, because of Michael Myers's complete lack of a personality. He doesn't really have any motives to impart, it would be like being brainwashed by a shark.

I did like that they completely destroyed Myers's body at the end, but of course he will never truly die as long as there is money to be made from another movie. Presumably the next installment will be set during the Strode family vacation to Tokyo.
posted by whir at 3:33 PM on October 23, 2022

Welp. Halloween Ended, alright.
Unfortunately, about two hours later than it should have.
posted by Atom Eyes at 11:48 PM on October 23, 2022 [1 favorite] 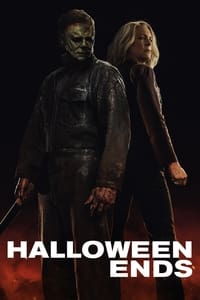