Forrest Taft (Steven Seagal) is putting his considerable talents as a fighter and marksman to use as a hired gun for the sleazy oil tycoon Michael Jennings (Michael Caine). The latter's bottom-line tunnel vision has him destroying entire communities if it means a bigger profit for his business. While in Alaska taking care of some business for his amoral boss, however, Taft meets a native Eskimo woman (Joan Chen) who helps him to discover the error of his ways and pursue a more righteous path.

Janet Maslin: Mr. Seagal's own film is awesomely incoherent, a mixture of poorly executed violence and "Dances With Wolves"-style astral musings. Nothing about it is first-rate except some of the scenery. And on the debit side, the editing, writing and occasional slow-motion flourishes are clumsy in the extreme. The confusion extends all the way to Mr. Seagal's character, Forrest Taft, who starts out as an Alaskan oil company trouble-shooter before revealing himself fully as a more benign and thoughtful fellow. Forrest, a blurrier version of Mr. Seagal's usual image, is a kind of philosopher-thug.

Marjorie Baumgarten: Let's just say this: I didn't leave On Deadly Ground liking Steven Seagal any better than I did before going in. With On Deadly Ground, Seagal steps beyond his usual “action stud” role and takes over the reins as director. Seagal might be said to have gone Billy Jack in this movie for there is no better comparison by which to gauge it. On Deadly Ground is so inchoate and fragmentary that it almost seems like overkill to attack it from without. But certain things must be answered, like Seagal's environmental lip service that is utterly mocked by the movie's need to blow things up and destroy property. Seagal plays some kind of Red Adair-type character who puts out oil fires for Michael Caine's evil empire, Aegis Oil. Later we learn that he's not just a henchman for the bad oil-guys but also a top secret, government NSA-type who seems to be on some kind of vague mission of his own design. He's good to the Inuit natives (who, in turn, are simple and pure), he wears lots of fringed buckskin garments, and ends the movie with a several minutes-long environmental tirade to an audience-full of Inuit natives packed into the Alaskan Senate.

Kim Newman: After Under Siege, Seagal reverts to the three-word title and distinctive ponytail of earlier movies for his directorial debut. As usual, his character is above the law, hard to kill, out for justice and marked for death, but here he's also on deadly ground, turning his CIA training to good use by communing with wildlife, cosying up to Native Americans and killing scum.

Caine chews the scenery, but leaves the active villainy to others. The standard action plot keeps stopping so the star can deliver simple-minded but well-intentioned ecological messages, including a strange, lengthy Green Party political broadcast.

The fuzzy thinking allows for gorgeous outdoor photography and a few too many dead spots, but Seagal the director shows real muscle by staging one of the screen's best-ever exploding helicopters and allowing Seagal the star to spit out tough talk, as when he refuses to shoot Caine because, "I don't want to dirty my bullets."

Trailer
posted by Carillon (5 comments total)
I remember liking this as a kid. I was pretty into nature and had a fuzzy idea of conservation, so I liked that aspect. It was also on VHS at home, so the explosions and shots of fire were exciting and felt well done, I don't know how they played on the big screen tbh. Granted I missed the racism and othering of the native population, and the way Seagal cloaks his acceptance by the natives as justification for his actions. That's super gross, and while it has a long history of being used by white guys, it doesn't make it better.

I wonder what house or appliance Michael Caine got to buy with this performance.
posted by Carillon at 1:35 PM on October 13, 2022

I hope this movie bought Michael Caine a house as fantastic as the one he bought with his Jaws IV money.
posted by RakDaddy at 9:13 PM on October 13, 2022 [1 favorite]

I paid to see this in the theatre on $2 Tuesday. About 20 minutes in, the projector broke and we all got comp full price tickets. I used mine to see a better movie.
posted by TWinbrook8 at 5:12 AM on October 14, 2022 [4 favorites] 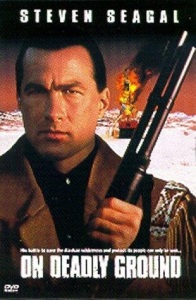